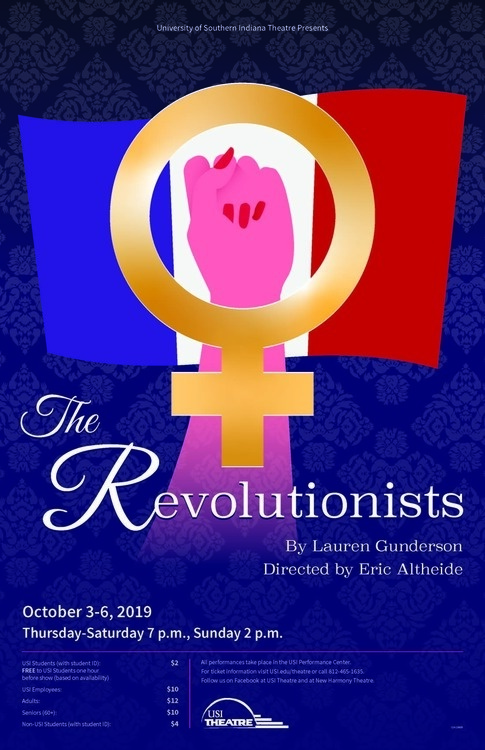 As soon as the first guillotine cut through the upper stage, “The Revolutionists”  had my full attention.

I had recently studied up on the French Revolutions and the Reign of Terror, and was not sure how a play focusing on this tragic time could pull off a humorous tone, but I was surprised to find that the script and actresses easily pulled off this transition. From the first line of dialogue, the theatre was laughing, not fully aware of the tragic ending we were all heading towards.

I am rarely disappointed in this school’s theatre department, and “The Revolutionists” was no exception.

One of this play’s main points is the importance of the arts and how they can be used to capture history. This play is a perfect example of that idea, letting the audience into the imaged minds of Olympe de Gourges, Marianne Angelle, Marie Antoinette and Charlotte Corday, and how each of these women were trying to fix their broken country.

Performing a play with varying scenes and only four actors can be difficult and cause people to stumble. I saw none of that in this production though, as the switching between scenes and characters along with the use of the stage were handled well. I especially loved the use of printed portraits to help explain who each of the people mentioned were and the way the portraits added to the scenery.

The witty banter between the four women kept the play moving along and gave the audience much needed laughter when the play’s second act reached a darker storyline.

The modern twist to the play’s language made me torn, as I could not decide whether its use was working well within the show or if it broke the illusion of a story.

The characters were all well individualized and the actresses who portrayed them worked seamlessly as a unit.

When the play began its second act, I knew what was in store for the characters, but was eager to see how this would be handled. The use of minor stage changes and simple lighting adjustments helped create a new atmosphere with each different scene location, whether it was the theatre, guillotine or judgement hall.

I found myself feeling so deeply attached to the characters that a good majority of the second act was spent trying to hold back tears. I believe this effect is achieved solely through the profound acting given by the four leads.

The few stumbles in dialogue were quickly forgotten as the actresses carried out such compelling performances in their emotions, body language and lines. Looking around the performance center, I realized I was not the only one caught up in these epic performances, as several of the people in the theatre were wiping away tears.

The message of the play was definitely a hit for me as well, as these women struggled to find a way to overcome their oppression and fears to better the world around, even if it meant dying for the world they hope will come.

This show was definitely worth going to see and is highly recommended. I only wish someone would have warned me to bring tissues!