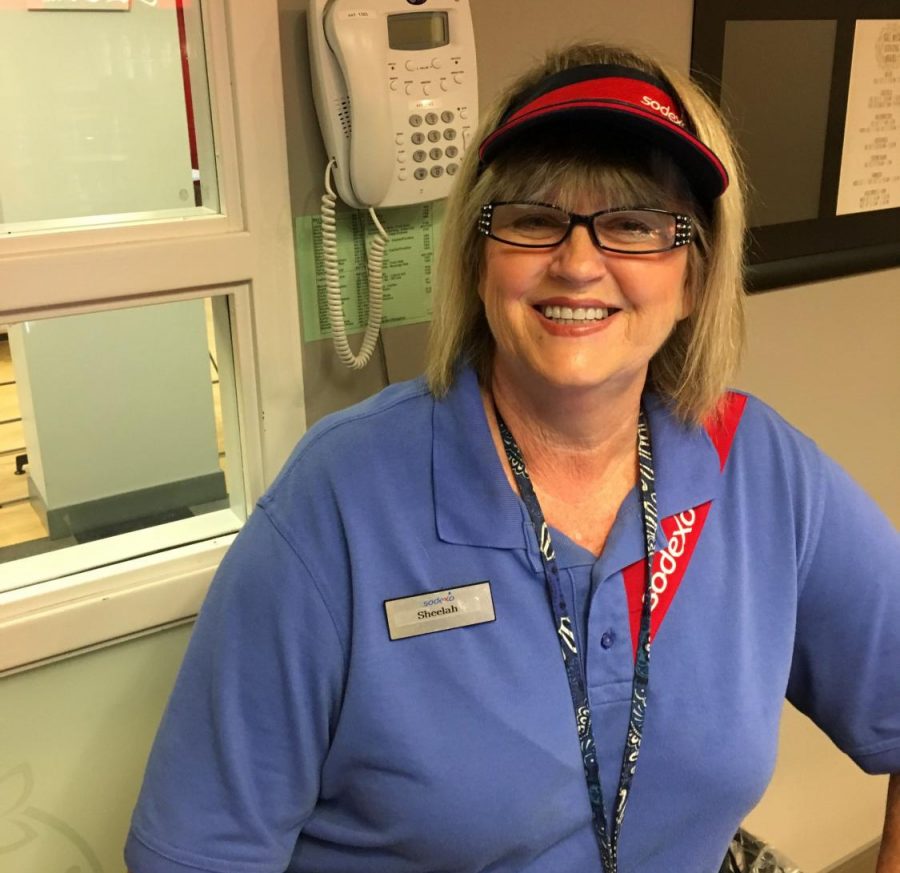 Sheelah King has worked for Sodexo for 11 years.

Sheelah King keeps a “Wall of Fame” folded up in her filing cabinet in her home.

The Sodexo employee started this poster last year and it contains articles and pictures from The Shield featuring students she knew from her time working as a cashier at the Simply to Go food stand in the Liberal Arts Building. King has a short term memory problem from a car wreck when she was younger and has a hard time recalling things.

She thought that if she ever stopped retaining names and faces, she could always look at the poster so she could never forget.

King has worked for Sodexo for 11 years. She applied to work at the university after her daughters decided to go to USI for the dance team. King heard the university was a great place for working part time and she had experience in catering.

Her daughters decided to go to a different school but King stayed because the opportunity to work full time with summers off was perfect for her.

King went from working in the Loft, to Red Mango and back to the Loft. She eventually took a position working at the Simply to Go in the Liberal Arts Building for three years before moving to Simply to Go in the Health Professions Building this semester. King said she loves her job because it allows her to have one-on-one interactions with the students and faculty.

“I have found that I feel like the luckiest person in the whole wide world to be here, you just can’t imagine,” King said, “I get teary eyed thinking about it.”

King said she tells her family all the time about her job and how even though sitting at a register might not seem glamorous, she sees there’s a need for students to make that connection with her.

“We have kids that are coming from clear across the world and they have nobody when they come here,” King said. “That’s what really touches me. They’ll say, ‘You don’t know how much it means to me that you’re here every day and when you’re not here, I’m looking for you.’ And I’m like, my golly…it makes you feel like you’re valued.”

King had a hard time when she found out she was being moved from the LA to the HP. She said she felt like the students at the LA were counting on her every day to say hello when they had a bad day and put a smile on their faces when they needed it. She cried for days and couldn’t sleep after she moved because she felt like she was leaving the students behind.

That’s when the students she knew from her old position began to show up at her new one. King said students would come up to her in the HP and tell her they would make the trip over just to get their lunch from her.

“I think it’s more for me than them,” King said. “My kids are all grown and doing their own thing and it’s like having kids again, you know? I feel like you guys enrich me.”

King said she sometimes tells people that she will retire in five years, and then a new freshman will come in and she will think ‘that’s somebody who needs somebody and they need a friendly face.’ She said her husband tells her she will never retire.

Javontay Moss, a senior communication studies major, met King when she worked at the loft. He had longer conversations with her when she moved to Simply to Go about her family, his family and their faith. He said she’s just a fun person to be around.

“She always wanted to lift us up when we were having a bad day,”  Moss said.

Moss said it was neat to form a relationship with an employee outside the classroom. He still visits her at the HP.

King said she learned a great lesson this year when she moved to the HP. She learned that she doesn’t do well with change when it’s out of her control because the students from the LA didn’t know she left and she didn’t get to say goodbye, but the students found her anyway.

“I’ve seen it first hand that things happen for a reason,” King said. “It may not be something that I feel is good at first at the time, but it will work out and I’m where God wants me.”