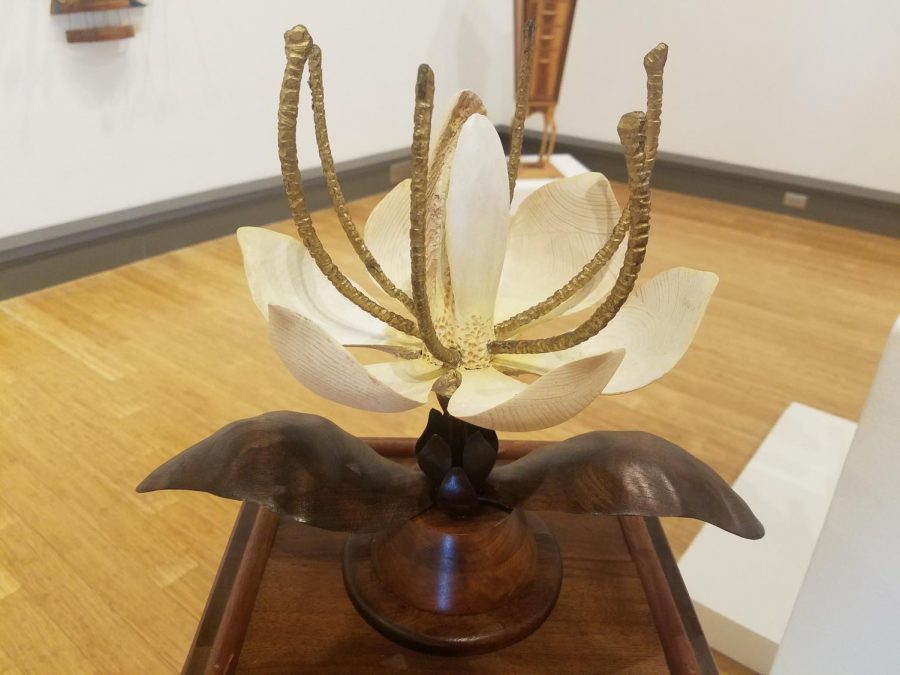 John McNaughtan, a professor emeritus of art, created this piece titled "Reliquary" as a commission.

A wooden dresser with a flower on top sits in the McCutchan Art Center/Pace Galleries. John McNaughton, a professor emeritus of art, made the piece titled “Reliquary” for a woman named Ann Lannert.

“Reliquary” is one of many pieces from McNaughton displayed in the gallery titled “Our Roots in Wood: Sculpture from the University of Southern Indiana’s Permanent Collection.” The gallery is curated by Gabby Pyle, a senior studio art major and Susan Sauls, director of the University Collection. The gallery shares the space with “John McNaughton: Still Kicking and Carving” which features McNaughton’s more recent works.

Pyle helped curate the gallery as a part of her James Sanders Gallery Fellowship. She worked with Sauls to select pieces for the gallery. The pieces, which were being kept on the fourth floor of the Liberal Arts Building, were made by former students and faculty.

“It’s kind of nice that I got to curate this show because being a studio art major, I focus mainly on ceramics and wood so it was a lot of fun to be able to see all the past students, alumni and faculty, that have also made pieces that have gotten into the collection,” Pyle said.

Pyle picked wood pieces so they would be cohesive with McNoughtan’s work in the other gallery.

“Being able to have a strictly wood show is really nice to see because I definitely think that wood gets overlooked in terms of the art shows we have…wood is something that, depending on how it’s used, it has both a utilitarian and an aesthetical function to it,” Pyle said. “I love that it gets to be seen by all of my friends and my family and anybody really. It’s nice to say that I helped to curate this show so you guys can come and see what I really like to do.”

Sauls said she loved working with the students because it was exciting to see how they handled the artwork, work with it, take care of it and do different projects with it.

“It’s kind of those skills you need to apprentice and learn,” Sauls said. “It’s really hard to teach those things in a classroom setting.”

Pyle said she wants to do more gallery work after she graduates.

“I definitely think it was a really good thing for me to do because it definitely showed me that this is something that I’m really passionate about and that I would really like to pursue after I graduate,” Pyle said. “I know that it’s really hard to make art and live off your work but this is definitely something that I’ve found is really interesting to me and I could definitely see myself doing this stuff in the long run.”