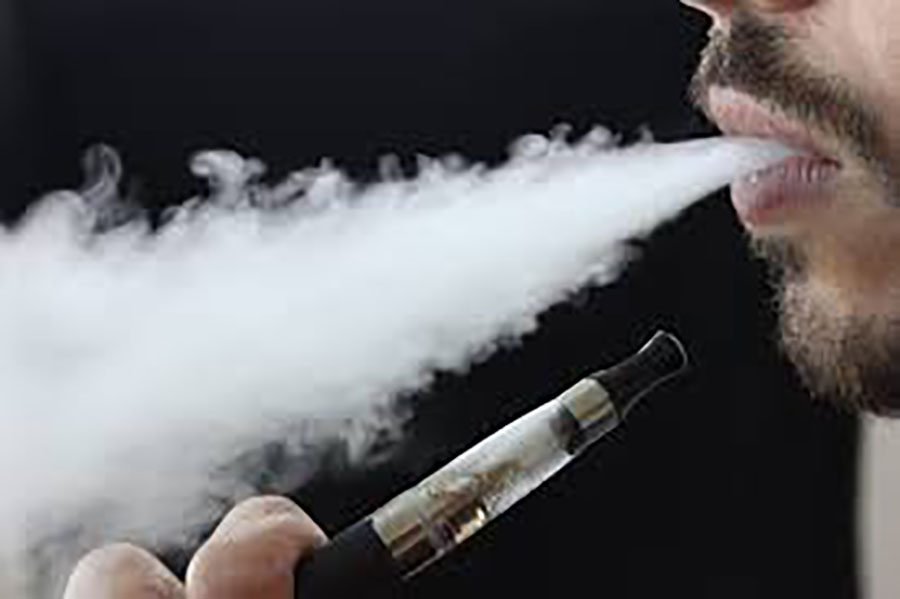 When Taylor Benge first came to USI he had never smoked a cigarette in his life.

However, as Benge’s freshmen year carried on, he slowly picked up on the risky habit. The environmental science major began vaping because all three of his roommates vaped and he was heavily exposed to it. Eventually, Benge found himself vaping constantly with no plans to stop.

“If you’re just starting college or if you’ve got friends who do it, understand they have their reasons but don’t give in to peer pressure because that’s what I did,” Benge said.

Indiana had its third confirmed death linked to vaping Sept. 6, raising concerns about the dangers of e-cigarettes. The CDC, FDA, state, and local health officials are working together to learn more about what in the devices are causing these tragedies and other health risks it poses to the public.

USI is a tobacco-free campus and prohibits smoking or vaping in or near buildings but that doesn’t stop students from taking a hit. The campus has always had a smoke-free policy and when e-cigarettes came out on the market earlier this decade the Dean of Students Office also banned the devices.

The DOSO sent out an email to every student Sept. 5 reminding them of the policies and attached information of a health alert from the CDC. The DOSO has additional plans to help educate students of the risks by setting up a table at the Wellness Fair.

Dean of Students Jennifer Hammat is suspicious of the effects vaping has on students and wants to educate them on the health risks so they can make healthier decisions.

“If you are vaping all the time, that can have long term detrimental effects on their lives,” Hammat said. “So for me, I’m okay with you being an adult and making your own decisions but you’ve got to know the information to be able to say is this important enough, is it worth it?”

One of her main concerns is that there is a lack of data on devices used to inhale e-cigarettes and the ingredients used in them. Another concern for Hammat is that vaping is being advertised as a healthier alternative to smoking.

E-cigarette manufacturer JUUL Labs is under fire from the FDA because they have been advertising their products as a safer alternative to smoking, a claim which has not been confirmed by the FDA. The FDA sent a letter to JUUL Labs Sept. 9 warning them of the consequences of their violation.

“Referring to your ENDS products as ‘99% safer than cigarettes, ‘much safer’ than cigarettes, ‘totally safe,’ and ‘a safer alternative than smoking cigarettes’ is particularly concerning because these statements were made directly to children in school,” the letter reads, detailing the violations.

The letter orders JUUL Labs to submit a written response within fifteen days of receiving the letter to “describe your corrective actions, including the dates on which you discontinued the violative promotion, labeling, advertising, sale, and/or distribution of these tobacco products.”

The FDA reports that nicotine can disrupt normal brain development and may have long-lasting effects such as increased impulsivity and mood disorders. Nicotine is an addictive chemical that can increase side-effects on developing brains. The FDA has determined that no device containing nicotine is safe.

E-cigarettes operate by heating a liquid solution to a high enough temperature so that it produces an aerosol that is inhaled. These liquids typically contain nicotine.

Newer e-cigarettes like JUUL have nicotine salts in their liquids, which they claim increases the rate and amount of nicotine delivered to the blood.

The CDC reported over 380 cases of lung illness across 36 states and one U.S. territory. Every patient has a history of using e-cigarettes containing THC and nicotine.

The CDC urges the public to refrain from vaping until more research is done.