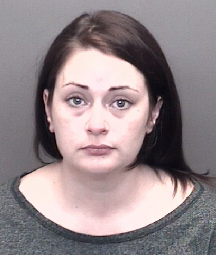 The Vanderburgh County Sheriff’s Office arrested an Evansville woman for fraud after allegedly stealing over $18,000 from the family of Oliver Dill, a 3-year-old child who tragically died in July after being left in a hot vehicle on USI’s campus.

Caroline Marie Rich was arrested Sept. 11 and charged with six felonies – three counts of fraud and three counts of theft – after allegedly defrauding the grieving family of money meant to cover the burial and memorial expenses of the deceased child, whose father is an employee at the university.

Deputies were called to Alexander Memorial Park for a fraud report Sept. 7 according to a press release from the Sheriff’s Office. Detectives with the Sheriff’s Office began an investigation that revealed Rich, a family service counselor for Dignity Memorial/SCI Shared Resources which owns Alexander Memorial Park, had worked with the family of Dill on contracts totaling $19,273 that included purchases of burial plots and headstones.

Dill’s parents and grandparents made the plot and headstone payments directly to Rich through PayPal and personal checks in hopes that she would transfer the funds to Dignity Memorial. Money was allegedly taken from the family’s personal accounts as well as a GoFundMe account set up to help cover Dill’s funeral expenses. A member of the family had a personal relationship with Rich and did not suspect foul play according to the release.

The family became suspicious after receiving invoices indicating a substantial outstanding balance still owed. Dignity Memorial began an internal investigation and discovered Rich had allegedly kept all but $1,000 of money paid by the family. Detectives verified the money transfers to Rich and the amount allegedly stolen totaled $18,273.

The Sheriff’s Office interviewed Rich with her attorney Sept. 11 and though she initially stated she had taken the funds with the intention of helping the family, she declined to speak further.

Rich was arrested and taken to the Vanderburgh County Jail where she is being held without bond until a court appearance.