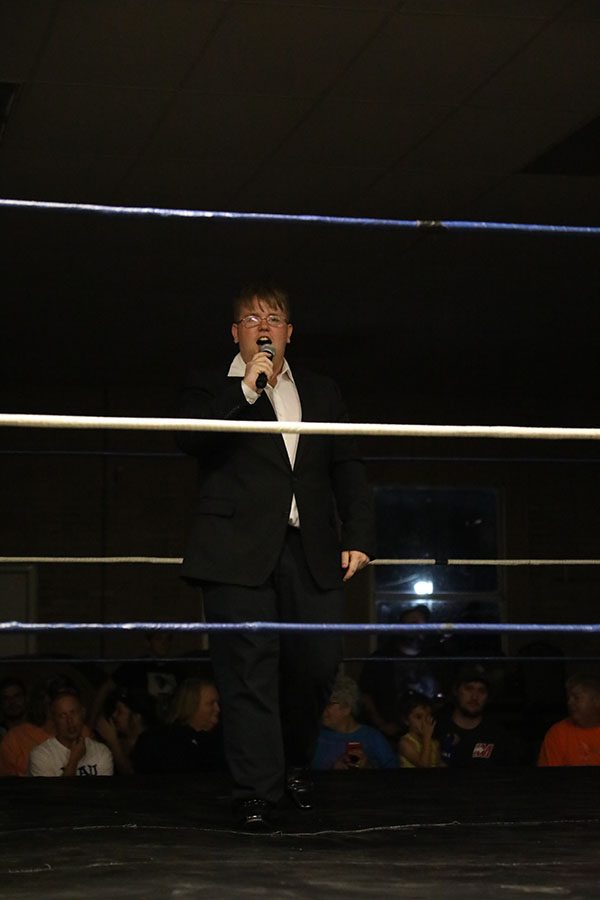 The lights inside Lanterman Park’s Community Center dimmed, calming the crowd as they awaited the introduction of the man they hoped would claim the Heavyweight Championship.

A booming voice came across the speaker: “It’s time for the main event of the evening. The following contest scheduled for one fall is for the Uprising Heavyweight Championship.”

The spotlights flickered as Loverboy’s “Working for the weekend” jolted the crowd to life.

Title challenger Bishop Frost exploded from the black curtain decked in boots, a singlet and a black hoodie. The crowd that lined the entryway erupted as Frost made his way to the ring. He paced the ring, fully focused on his task.

“Homicidal” Stephen Davis, the uprising heavyweight champion, emerged from the curtain to a chorus of boos, scowling at the crowd with each heavy step toward the squared circle. He slid into the ring and both men met face-to-face.

The referee signaled for the bell and as it rang throughout the building, both competitors knew it was time to rumble.

This atmosphere is commonplace every month in Bridgeport, Illinois where the Illinois Wrestling Alliance Unlimited hosts a two-hour wrestling event.

Amidst the pack of wrestlers, referees and promoters stands a USI student fulfilling his dream.

“It can be almost overwhelming if you don’t know what to expect but you get to immerse yourself into what happens,” said Aaron Mattoon, junior accounting and philosophy major. “It’s an experience like no other. It’s like watching a drama performance where the script isn’t necessarily laid out.”

Mattoon is a ring announcer for the IWAU promotion, where he works at their monthly events in Bridgeport along with their weekly events in Noble, Illinois every Tuesday.

The fighting, loud music and insane stunts may turn away some people, but that is what has attracted Mattoon to attend shows even from a young age.

His earliest memory of professional wrestling came in 2004 when he, along with his dad, watched Randy Orton and Cactus Jack wrestle what he calls “one of the best hardcore matches in WWE history.”

“I remember that match specifically and that’s the moment where I was like ‘I love this,’” Mattoon said. “Ever since then, I’ve been a fan.”

Mattoon has only worked at IWAU for the past few months but began ring announcing five years ago at the age of 15. After seeing an ad for an announcer, he decided he would give it a shot.

“I worked a match and the next thing I know, I was doing the whole card and five years later, here I am,” he said.

According to Mattoon, being a ring announcer is about more than just having a good voice.

The announcer sparks the responses from fans, encouraging them to cheer faces (good guys) and boo heels (bad guys). He said he basically has the fans on a string and enjoys being able to control the crowd.

“Most of the time I’m kind of just a shy, not really confident person, but when I step in the ring it just feels like I own the place,” he said.

Outside of the promoter, the announcer communicates most with the performers, reporting their height, weight and where they are from. They are also responsible for cuing the DJs and communicating with the referees about what is going to happen in the match.

“Especially if its a guy that the crowd has no idea who it is, you have to sell the crowd on who it is, whether they have to cheer or boo them and that ultimately happens through your communication with the wrestlers,” he said.

A common theme in professional wrestling is “anything can happen.” Mattoon said, not knowing what is going to happen is what keeps the fans on the edge of their seats and coming back for more.

Smaller promotions like IWAU don’t have the same level of fame or theater as larger companies like WWE, but fans are much more involved in the show.

The crowd feels the intensity between the wrestlers, sitting close enough to see the pain plastered on their faces.

“You’re right up in the guy’s face,” Mattoon said. “Sometimes you have guys flying right into you. That’s what makes indie wrestling so different from WWE.”

Head Trainer Joshua Totten described the promotions as more personal than WWE as most of the wrestlers are familiar faces in the community.

“My gosh, you might see that guy working at the gas station down the road and ‘oh my gosh, that guy is that pro wrestler,’” he said.

Totten has been a part of IWAU since its creation 10 years ago with weekly free shows every Wednesday night in Olney, Illinois

Nearly 100 wrestlers have come through the promotion since its inception.

“I’m just trying to get the guys pointed in the right direction and get them to do the right thing because there is a certain level of professionalism and athleticism that goes into it that you have to maintain,” he said.

Totten, who occasionally still performs in the ring, said the psychology involved in a match is what has changed most in the industry as wrestlers have to up the stunts to receive reactions from the crowd.

“You run into the whole thing of well we had five burning tables last time, now we have to have 10 burning tables,” he said. “Luckily, I train them to pull that down and use the actual psychology to make people react.”

Wrestler and IWAU General Manager Kyle Pipher said working in front of a crowd is what makes him continue to lace up his boots.

“You can practice by yourself all you want, but once you get in front of people, its go time,” he said.

Pipher has been a fan of wrestling since he was six years old. It was something he had always wanted to do, and he finally landed the opportunity almost eight years ago.

Pipher started late in the industry, but now at the age of 35, he knows what it takes to compete in professional wrestling.

“It takes talent to be good at this,” he said. “Some people think ‘oh it’s just all about getting in the ring and performing some moves.’ You’ve got to get these people emotionally invested in that match.”

It’s the potential for injuries that Pipher said is the most difficult part about competing every week. From jumping off 7-foot steel cages to nearly having his nose and jaw broken, Pipher realized after his first practice that wrestling was going to take a toll on his body.

“I did about five or eight leg drops in the ring and then I couldn’t sit right for two weeks, which didn’t help since I drove a truck at the time,” he said. “This business isn’t for everybody. It can be tough at times.”

It’s not just the flips and crazy moves that brings fans to the shows week after week.

“If you can get them emotionally involved, they’ll come back,” he said. “I can hardly watch a ‘Monday Night Raw’ match because they don’t have any meaning to it. If we worked that slow and took that long of a break to get things done, we would probably start getting boring chants.”

Working in professional wrestling comes with its bumps and bruises. Mattoon has been thrown out of the ring and almost hit with chairs many times.

Nothing, though, compares to the match where he was chased around the ring with a plastic fork by a large, 6’8”, 280 Ibs wrestler with a scruffy beard and hair all over his chest.

“He threw a fan’s nachos out of his hands and picked up their plastic fork and I’m bailing out of the ring so they don’t throw chairs at me again,” he said. “He makes eye-contact with me, starts chasing me around the crowd with this plastic fork as if he is going to attack me. After taking a few laps around the ring, I eventually bail to the back.”

Mattoon has no interest in joining the ranks of the swash-buckling, tight-wearing performers. He knows that is not his place.

On the few occasions he does step in the ring after the bell rings, Mattoon fills in as a referee, something he said is exhausting and becomes less about the fans.

“With ring announcing, it’s a lot of playing to the crowd,” he said. “As a referee you’re more focused on the match itself, making sure things go right.”

Mattoon understands that only a small percentage of announcers make it to national promotions like WWE, but hopes to keep ring announcing for as long as he can.

“This is something that I want to stick with and see all the way through, but I know realistically that making it to WWE or AEW is a long shot,” he said. “Even if I never make it to the big time, I love it so much that I’ll work the indies until I die.”