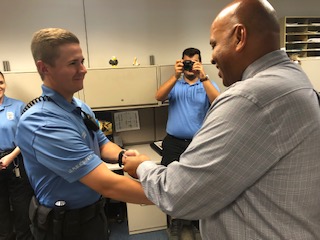 USI President Ron Rochon presents Public Safety Officer Parker Roark with a new badge. The badges are a part of an overhaul of Public Safety apparel.

USI Public Safety is going through some apparel changes and they’re ready to show them off around campus.

“These badges show the professionalism that you all bring everyday,” said Steve Bridges, vice president for Finance and Administration. “Along with the (Vanderburgh County) Sheriff’s Office, your presence has elevated our entire operation.”

The new apparel comes a year after USI finalized a partnership with the Vanderburgh County Sheriff’s Office that commits five deputies to patrol campus.

Public Safety officers currently have an American flag on their right shoulder, but the stars are on the left side of the flag so that it appears to flow to the rear. The flag will now flow to the front, symbolizing first responders moving toward the emergency and not away from it.

Officers formerly wore embroidered badges on their uniforms, which were silver for officer and gold for supervisors. They now have metal badges and name plates.

President Ron Rochon handed out badges to each of the officers and sergeants.

The badges will identify the university, rank of the officer, Public Safety and the State of Indiana, which they get their statutory authority from. An eagle adorns the top of the badge, symbolizing America and USI.

“Especially during graduation, we wanted something that would make us look better instead of just having the embroidered stuff on here,” Sergeant Keith Mosby said.

The officer badges are a traditional silver, while the supervisor badges are toned in gold and silver.

“Talking to the assistant director (Sam Preston), he said it’s important to remember where you came from,” Mosby, who has worked at Public Safety for 4 years, said.

The new patch design for Public Safety includes a USI background along with a fire crest, law enforcement shield and the star of life. The patch replaces the presidential scroll, which Mosby said was difficult to read.

“It makes us look more professional overall,” Officer Parker Roark said. “These are an accumulation of all those designs, so they kind of have a little bit of everybody’s input in them.”