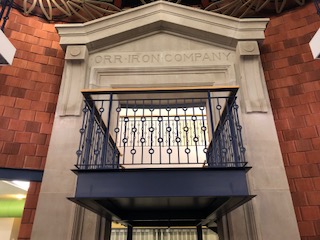 Inside the Fireside Lounge of the University Center East lies a 100-year-old Evansville relic.

The limestone doorway with “Orr Iron Company” engraved at the top displays city history and has a unique story.

According to the university archives, Indiana Department of Transportation donated the doorway of Evansville’s historic Orr Iron Company Building to USI. The building was torn down to make a new overpass on the intersection of Fulton and Lloyd as part of the Lloyd Expressway Improvement Project.

In 2007, a company called Holzman Moss Architecture was asked to incorporate the doorway into the design during the University Center Expansion Project. This was during it’s programming phase and it was originally thought the door would stand freely on the lawn. It was announced in 2009 that the door would be a decorative element in the central atrium of the University Center project. The doorway was placed where it stands now in 2011.

The Orr Iron Company was founded by Samuel Orr, an Irish immigrant who arrived in Evansville in 1835. It expanded and moved in 1913 and stayed on the corner of Pennsylvania Street and Walker until the building met its end.

“Robert Orr was the one who signed the legislative charter that granted USI independence,” University Archivist Jennifer Greene said, referring to how much of an impact Robert Orr, Samuel Orr’s son, had on the university.

Robert Orr served as Indiana’s 45th governor from 1981 to 1989 as a member of the republican party. He was also a 2-term lieutenant governor and served in the Indiana Senate. He was well known for his initiatives in education and economic development. He signed the legislation in April of 1985. Before that, USI was a satellite university known as Indiana State University- Evansville.

On May 10, 1986, Orr received an honorary doctor of civil law degree from the University of Southern Indiana for his lifetime of contributions. Before this, he graduated from Central High School and helped manage the Orr Iron Company. He personally developed Hahn Incorporated, Erie Investments, Sign Crafters and Indian Industries.

He received his honorary doctorate and gave a speech during the first commencement when the university was officially known as the University of Southern Indiana.

Robert Orr has the university building, the Orr Center, named after him as well as the Orr highway, to recognize what he did for USI and Indiana altogether.