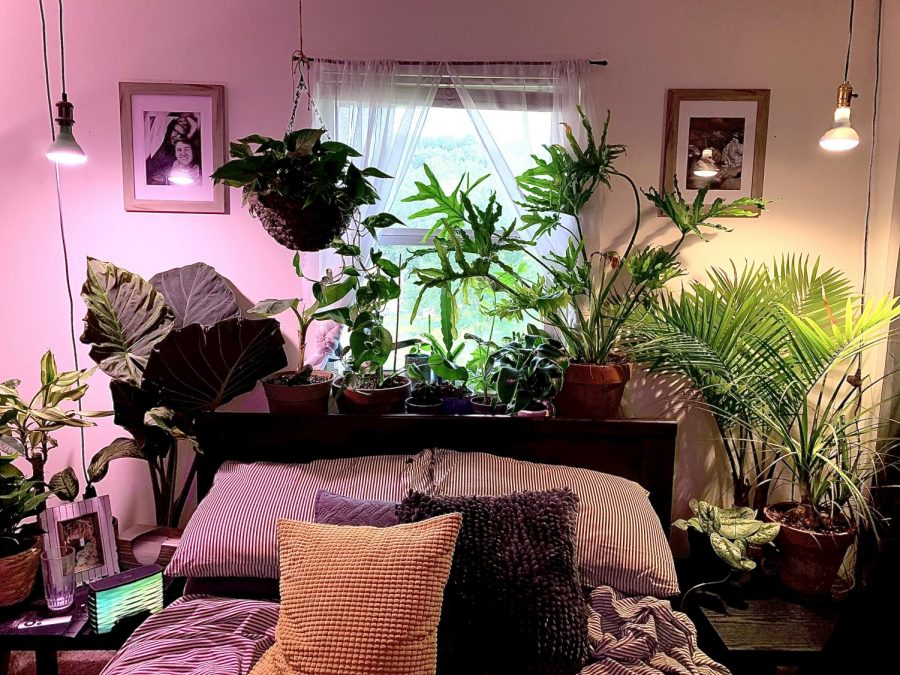 Cody Hagerman keeps around a hundred plants in the bedroom of his off-campus apartment. The junior environmental science major stores his collection of mostly large tropical plants on plant stands, under grow lights and behind his bed on a shelf he built. His favorite plants are orchids.

Hagerman started accumulating plants a year ago when he received a Cobaea scandens, a type of flower, from an event on campus. Hagerman began to buy other plants and he formed a community with the plant enthusiasts he met.

“When we’re with each other we’re just constantly bouncing off knowledge with each other,” Hagerman said. “We’re constantly learning new things. It’s just really great being able to speak to people who have the same interests as you.”

Hagerman wants to bring that community to USI with his new Plant Club. The club will be a place for USI students to discuss the collection and care of house plants. Hagerman will be the club’s president and meetings will start this semester.

“I wanted to create a community on campus that revolved around house plants because it doesn’t exist yet,” Hagerman said.  “House plants have become a very big trend for people our age and a lot of people don’t know how to take care of plants. I think creating a community where everyone can get together and talk about problems they’re having and discuss solutions to take care of their plants would be a really cool environment.”

Hagerman grew up around plants. His father was an arborist, a person who cultivates and studies trees, and his family always had gardens. Hagerman came to USI in the pre-med program but changed majors when he took a botany class with Edith Hardcastle, an associate professor of biology. He fell in love with the class and with plants. Hagerman was in a Chicago Starbucks with his boyfriend when he had the epiphany that he could make environmental science his career.

Hagerman started to develop the club at the end of last semester. He reached out to Student Development where he worked with Assistant Director of Student Development Jennifer Garrison. Hagerman found an advisor in Hardcastle and a vice president in junior biology major Rafael Gonzalez.

Gonzalez met Hagerman through shared biology classes. Gonzalez keeps his own set of plants including tomatoes, peppers and his favorite, chilenos, a spicy pepper plant.

Gonzalez likes plant care because it’s a way to quickly see the results of work.

“Since it’s not like having a dog or a cat, where you have to constantly tend to them, having a plant is just easier,” Gonzalez said. “It’s something beautiful too. It’s just naturally occurring and with some plants, like vegetables, you get a product from it too.”

Gonzalez said it’s relaxing to see the plant every day sitting on the window still.

“There’s almost a level of zen when you have a plant at home,” Gonzalez said. “You know there’s life and it’s not just you. It’s just something to do on your own time.”

One of Hagerman’s big goals for the club is to make a garden at USI so he can donate some of the food to local charities, food banks and take the food to the farmer’s market. There will be a sign-up sheet and table for the club at the upcoming involvement fair

“Being able to put your responsibility into something such as a plant, seeing it grow, taking care of it, watching it grow a new leaf, or watching it die is such a roller coaster because you’re taking care of this living organism,” Hagerman said. “It’s rewarding to be able to watch this plant grow that you put so much care into.”