Student quits job, comes back to school to become an actress 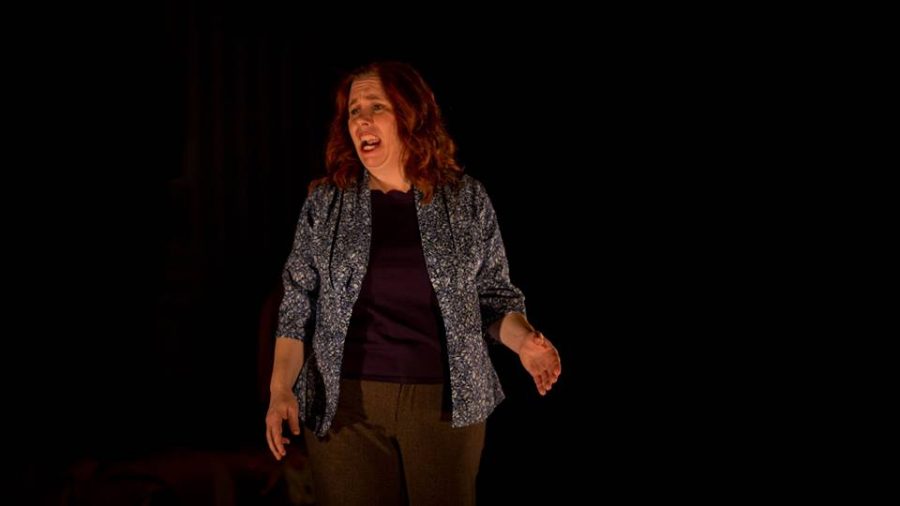 Angela Ackerman, a master of liberal studies student, performs her capstone project "On the Exhale."

A single heartbeat thumped through the audience for several seconds followed by a sharp burst of gunfire shattering the tension. The master of liberal studies student lowered the weapon and clutched her heaving chest.

Ackerman stood before a rapt audience performing her capstone project for her master of liberal studies program. In the past year, she had quit her job, come back to school and taken on a single-person self-directed play to prove to herself she was capable of doing what she had always wanted.

With her new degree in hand, she could finally become an actress.

Before Ackerman found herself center stage at the university, she was well established in a comfortable and safe career.

Her first task was to call the local sheriff and police departments. With each call, she scribbled crimes into her notebook.

Ackerman called local organizations to see if anything was happening that was worthy of a short feature story.

She then plopped herself down in her small cubical, and for the next couple hours frantically typed the news.

She rushed to the editing bay to pair her stories with video and edited the clips to the exact moments she wanted to be shown on screen.

She loaded the scripts into the teleprompter for the anchors who would be arriving soon. Long after the sun was up, Ackerman finally went home.

Forty-nine people were shot at Pulse Night Club in Orlando during the summer of Ackerman’s first year at WEHT/WTVW.

She said her already stressful job became more challenging because of the intense nature of the story.

Ackerman said she became frustrated covering the story because she had an opinion about the story that she could not share.

“It felt like I was putting my whole self into what I was doing at the news station, but it didn’t feel like anything I was doing was having any kind of impact,” she said.

She started considering a career change and began looking into getting a second degree.

Ackerman had always had a passion for theatre but had decided to major in communications the first time around because it seemed like the practical thing to do.

She was burned out and dissatisfied with always doing what she was supposed to do and what seemed practical.

She took a leap, and in the fall of 2016, she stepped onto the USI campus as a theatre major.

Ackerman, who was nearly twice the age of her classmates, had a hard time finding her place.

He said the younger students were more interested in their social lives, and it was hard for her to find likeminded people.

Altheide said it’s a challenge for anyone to flip their life upside down and do something completely different. He said Ackerman has the passion, intelligence and strong will to achieve it.

He said her experience playing character roles has prepared her well for the theatre industry.

He said Ackerman’s story is important.

“It takes courage to come back and do something you are passionate about,” he said.

Ackerman felt like her experience was incomplete as she prepared to graduate.

She toyed with the idea of getting a master’s degree in liberal studies. When she looked into it, she learned all she needed was one more class and a capstone project.

She wanted her capstone project to be a theatrical performance, but it had never been done before. After a few phone calls and conversations, she had permission to choose any play she wanted.

Her plan was to emulate something that could be shown as a thesis for an MFA in acting.

“I was initially thinking of it specifically as an acting challenge,” Ackerman said.

Ackerman began scouring the play catalogs in the library, checking out armfuls of plays at a time.

She sat in her bed flipping through play after play each night, dissatisfied with everything she read and unable to find what she wanted to say with her piece.

Ackerman finally narrowed her search to three pieces. The top contender was a comedy.

But it didn’t offer her a challenge.

Ackerman looked inward after she exhausted the catalog and asked herself who she was as an artist, what she wanted to say and what kind of issues resonated with her.

Then she remembered how helpless she felt writing about the Pulse Night Club shooting.

She searched for “plays on gun violence” and found a review for “On the Exhale” written by Martin Zimmerman.

Ackerman found the reviewer’s description of the play interesting.

She checked out the play from the library and brought it home.

She skimmed through the first couple of pages just to get an idea of the play before she went to bed that night.

Two or three pages into the play, she couldn’t stop reading.

“I thought it was so well written, and I instantly felt this connection to this character like I knew who this woman was just by the way it was written on the page,” she said.

When she finished the play, she was stunned and terrified. She couldn’t get the play out of her mind, but she didn’t think she was talented enough to pull it off.

The next day, Ackerman pounded on the door of Colin Nesmith, adjunct in performing arts, and told him how terrified she was at the thought of performing the play.

Nesmith encouraged her to take the chance on the one-person, self-directed play.

He also agreed to be the show’s co-director.

Ackerman stood on the stage with her assistant director Sydni Abel with three pieces of furniture.

A chaise lounge chair stood in place for the bed that eventually appeared on stage. A table stood where a desk was eventually placed, and a bench stood in for the eventual toy box.

Ackerman and Abel shuffled the pieces around for hours, trying to find the perfect places.
Ackerman told Abel to sit in the audience, as she moved from one piece to the next.

“Can you still see my face?” Ackerman asked. When Abel shook her head no, Ackerman shifted in the chair. “What about now?”

The locations of each of the pieces of furniture needed to be set in stone by the next day.

She second guessed her choice every time she felt like she had made a decision.

The lighting, sound and design crews could begin their work, only after the decisions had been made.

Ackerman had done visual research and presented the metaphors she uncovered in the play that was used by the students that helped her design her show. One of those metaphors was a maze.

One of the design students latched onto the idea of the maze and used the metaphor as inspiration for the intricate line patterns that eventually became the walls and floor of the stage.

Ackerman’s costume designer became transfixed by the idea of a bruise, which is spoken about during the play, and she was clad in blue, purples and browns and yellows to signify the healing and pulling back the layers of a bruise.

The choices of grey and green for the beds, walls, desk and toy box were inspired by the colors of an AR15.

Ackerman chose the solo performance because she thought it challenged her.

Ackerman kneels on her hands and knees on the floor of the stage, tracing the outline of a body on the floor with chalk. Standing up, Ackerman begins speaking.

She begins speaking about her job as a university professor, expressing her worries about eventually being shot by a student who was unhappy with his grade. Her fear becomes intoxicating.

The body outline on the floor doesn’t end up being hers though, it becomes her son’s who is shot at the local elementary school.

Ackerman’s character becomes obsessed with the weapon used to kill her son and has delusions of her son standing before her every time she goes to the shooting range.

Her obsession for her gun becomes all-consuming and she begins to feel powerless with the altogether separate will of her weapon.

Finally, Ackerman’s character leaves the weapon behind when she sees the look of disappointment in the vision of her son.

Ackerman stands in complete silence after her last line leaves her lips, and then exits the stage. Audience members begin standing up in their seats, their claps loudly filling the small room.

Ackerman plans to move to New York to audition for as many roles as she can after she graduates. She said she has two middle-aged dogs that might fare better in Chicago, so maybe she will go there instead.

She is interested in regional theatre, getting her MFA in acting and directing.

“People always ask me, ‘what are you doing next?’” she said. “I don’t necessarily have a solid answer, and I’m actually okay with that. My plan is to see where life takes me.”