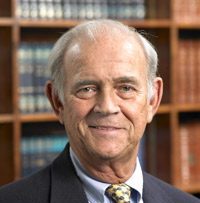 Ted Ziemer Jr., a former USI Board of Trustees member, has died at age 84.

Ziemer graduated from St. Louis University and earned his law degree from Indiana University. He was a partner in the firm of Ziemer, Stayman, Weitzel and Shoulders.

“Mr. Ziemer’s commitment to this community and our university was undeniable,” President Ron Rochon said in a press release. “We are grateful for his longstanding service, support and dedication to this institution. He will be truly missed.”

Ziemer was also a member of the USI Foundation Board of Directors since 1976 and served as chair for six years during USI’s first capital campaign. Ziemer and his wife also established the Ted and Clare Ziemer Endowment during Campaign USI, which supports Presidential Scholarships. He was awarded an honorary Doctor of Laws degree from USI in 1998 for his leadership.

“We appreciate all Ted has done as a valued member of our USI Board of Trustees and throughout the community,” Harold Calloway, the chair of the Board of Trustees said in a press release. “He will be missed and we extend our sincere condolences to his family.”

Services will be at 10 a.m. Tuesday at Holy Rosary Catholic Church. Visitation will be from 9 a.m. until service time.