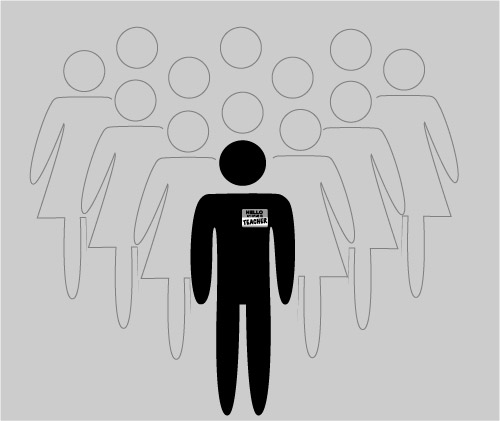 In his first year of college, Ben Flora’s major was radio and television. But during Flora’s summer break, he worked at a summer tutoring school.

The senior elementary education major said the idea of helping younger students with their work pushed him outside of his comfort zone.

“I had this student who was in second grade, and they were really worried about his performance in math and it wasn’t clicking,” Flora said. “Just getting to work with him and see him slowly pick up these ideas and being able to talk with him, I was able to recontextualized problems in a way that he understood. I loved working with him which made me want to go into teaching.”

When Flora was an elementary student, he never realized all his teachers were women, so he never considered elementary education for his college major. Flora said he believes it is good for students to have a mix of male and female teachers in school to give them different role models for each student to relate to.

“The more male teachers the more male mentors’ kids get to see,” Flora said. “Younger boys tend to respond better to male teachers talking to them and encouraging them on assignments and stuff. I’ve just noticed that they tend to look up to you more, which is really cool because then you get to mentor these kids more while you’re teaching them.”

Flora often thinks about why he didn’t have a male teacher in school, and why it is considered a gender norm for women to teach young children.

“I think it may just be the uncomfortable feeling of working with kids,” Flora said. “I think men sometimes are a little more uncomfortable dealing with younger ages.”

Flora said it can be uncomfortable being an elementary education major, but not because of his young students. In many of his university classes, Flora is the only man out of 15 to 20 students which he says feels awkward.

“You don’t necessarily get as many people that you can ask for a homework assignment,” Flora said. “It’s just awkward as a guy to have to ask for a girl’s phone number in a platonic way. I feel more comfortable trying to make friendships with other guys than I do with girls.”

Flora said it is interesting to be one of the few men working as teachers because his students really like it when he is in their school.

Flora hopes he makes an impact on his students beyond just their schooling but as a role model who proves they have the possibility to become teachers themselves.

“I’m really glad I wound up doing this as my major,” Flora said. “(Teaching) wound up being something I really enjoyed doing. But when I was planning to go to college, I didn’t think of it as an option because I never saw it.”

Isaac Redman believes most male teachers focus on curriculums like math, science and engineering classes. The senior English teaching major said teaching classes in arts, humanities and English are not a common preference of men due to the stigma that the subjects are more feminine.

Redman said teaching English is important to him because it helps students think.

“The lack of critical thinking is something I really want to focus on and improve in my students because I feel like English is a great vehicle for improving critical thinking,” Redman said.

Redman said many of his classes have only a few men since English is a predominantly female-heavy major, but is not bothered by the fact. However, Redman does believe the uneven ratio can be a disadvantage to his future students.

“I think it’s good for students to get as diverse a range of teachers a possible, whether the diversity is race, age, gender, etc.,” Redman said.

Redman believes there is not only a lowering number of men interested in teaching, but teaching as profession overall is lessening.

“The prestige of being a teacher has lessened over the years,” Redman said. “Now there’s a shortage of teaching in general because of all the drawbacks.”

Redman said it is not that teaching is looked down upon. Rather, people don’t understand all the work that goes into teaching.

“It’s a 40 hour a week job,” Redman said. “But people don’t really consider all the grading, lesson planning and professional development that goes into it. I feel like people have this idea in their head like they know how a teacher should do their job or they think they can do it better or know more about.”