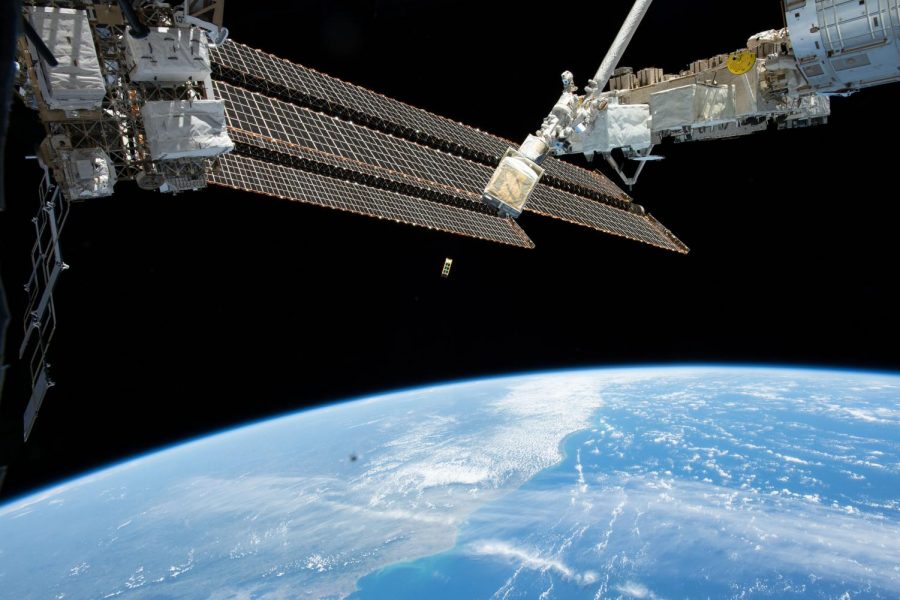 Photo courtesy of NASA and NanoRacks

The launch of USI's CubeSat from the ISS. 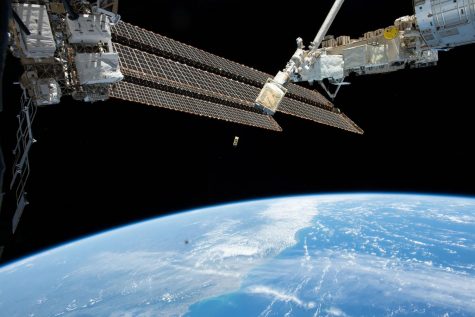 Photo courtesy of NASA and NanoRacksThe launch of USI’s CubeSat from the ISS.

Five university undergraduate students were finally able to see the 10-by-10-by-30 centimeter satellite launch into the great beyond after two and a half years working on the UNITE CubeSat project.

“It was a really great feeling because after working on this project for two plus years, finally seeing something that you put so much time and effort into being deployed from the space station I mean, you don’t hear any sound but you just imagine this little ‘boop’ as it’s being shot out,” Helms, the team lead, said.

The CubeSat will be deployed for 15 months and has three main missions: conducting space weather measurements, measuring exterior and interior temperatures of the spacecraft for comparison with a thermal model and tracking orbital decay of the spacecraft in the lower ionosphere where other methods are in error.

Helms said the next step of the process is to analyze the data that will be transmitted to them through a satellite network.

Helms said the data will be published on their website, and the team is also working on an app to publicize their data.

After the data is transmitted through the satellite network, it goes down to some ground stations and then to their vendor.

“They take that data and they give us an Excel file that has all the data we’ve transmitted when they received it,” he said. “We go in, grab that data and then run through all the codes that we’ve written to parse that data out and extract that to something we can read.”

Helms said he is really grateful for the opportunity to work on the project and it has led him to think of things differently.

“You’re capable of more than you think,” he said. “You may think that ‘oh I’m not that good at this, there is no way I could be doing this as an undergraduate student,’ but here I am graduating in the spring, and I have two and a half years of experience working on a satellite.”

The satellite is the first CubeSat to be built by a public institution in Indiana and was funded through a $200,000 grant through the NASA Undergraduate Students Instruments Project.

“NASA is taking a risk because most CubeSats you have an all graduate team or a mostly graduate student team at the university level,” project adviser Glen Kissel said. “I wrote the proposal and fortunately we were funded in April of 2016, we began the project in August of 2016.”

The associate professor of engineering said 47 teams received funding for projects that ranged from balloon flight, airplane instrumentation flights, sounding rocket flights and CubeSats. Of the 47, 23 received funding for CubeSats, and at this moment there are only a few that have actually finished.

The UNITE team flew to Cape Canaveral, Florida to see the satellite launch aboard the SpaceX Dragon Capsule to the International Space Station Dec. 5.

“Ryan (Loehrlein) had it seated next to him in its own seat next to him on the airplane,” Kissel said. “A flight attendant came through just before we took off in Dallas, and she said were missing someone.”

He said Loehrlein had to explain to the flight attendant that the CubeSat had its own ticket.

After the CubeSat launched, the satellite began transmitting data on its stability, which Kissel said is an important aspect of the functionality of the satellite. He said the CubeSat must be stable and oriented properly in order for the plasma probe to record accurate data.

“But that’s going to take a year for it to stabilize in that manner, so January of 2020 is when the primary mission begins,” Kissel said.

Kissel said the satellite will record and send stability and orientation data in the meantime.

“Right now (the data) is not understandable,” Kissel said. “It’s letters and numbers… our students will take the data, they will put it in a spreadsheet and it will be converted in a way that’s understandable.”

He said the CubeSat contains a satellite phone that allows for constant communication, a marked improvement on the old method of waiting for the satellite to be within range of the university.

“This is a unique feature of our CubeSat, and not a lot of CubeSats have this feature,” Kissel said.

He said the CubeSat was designed in the 90s with the intention of being an easily transportable satellite for research. The idea is that the CubeSat can be inserted into a canister and carried as “extra weight” on a rocket.

“There’s always extra room and extra weight margin that goes unused, and because it was kind of a compact form factor it’s easy to load up and eject into orbit,” Kissel said.

“Purdue actually wanted too much money from the grant, and Purdue physics actually dropped out,” Greenwood said.

He said one of the projects original students was in his physics class at the time and asked for help.

“He had just found out the devastating news that Purdue had pulled out, so he came to me and said ‘would you be willing to be part of this grant to make it multidisciplinary?’ And I said sure, why not,” Greenwood said.

He said that they recruited physics students and wrote bios for the grant proposal. When it was accepted, Greenwood was tasked with learning more about the probe.

“The main purpose, at least the main scientific purpose of the CubeSat, is to measure the ion density, temperature and electron density of the very lower portions of the ionosphere,” Greenwood said.

He said this has not been done with a CubeSat before. There have been measurements of the upper levels, but not the lower.

“The main scientific instrument is what’s known as a Langmuir Plasma Probe,” Greenwood said. “My job was to become familiar with plasma physics, to learn how the plasma probe was working, and to basically teach the students about that as well as teach them where the magnetic field of the Earth comes from and how it interacts with solar radiation which is given off by the sun.”

Greenwood worked closely with two physics students that have since graduated as part of the project.

He said Quark tested the plasma probe in that chamber to calibrate the instrument.

“Jose Feroza … made a propagator that would take information … to predict where the CubeSat would go to,” Greenwood said.

Greenwood said that the grant required the project to be student led. The professors were not allowed to build the components of the CubeSat or be hands-on.

“It’s very exciting to have something that I was involved in that’s up in space,” Greenwood said. “The pride I feel for our students is tremendous.”