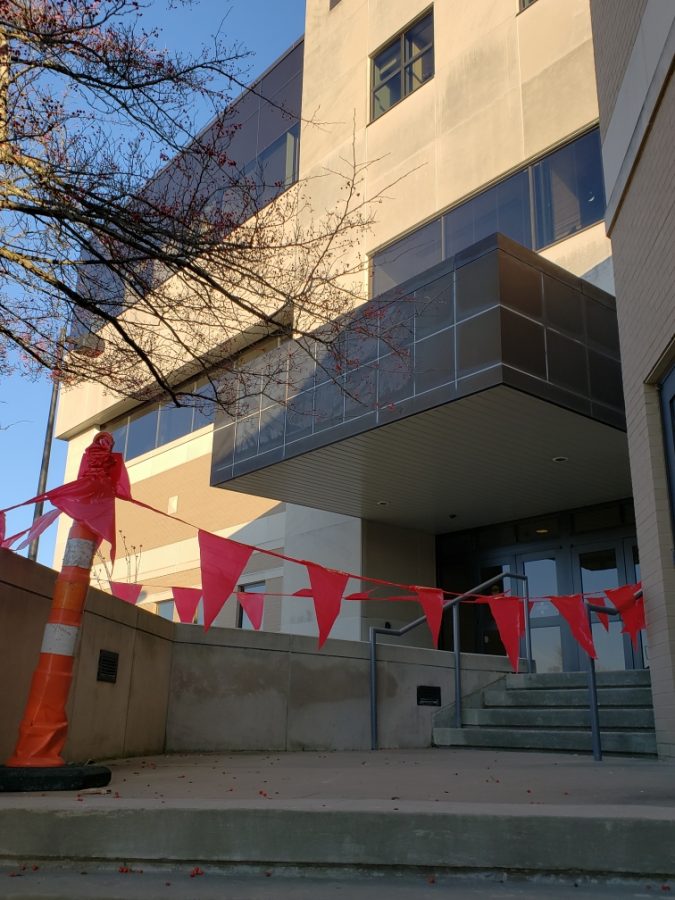 After spring break, students will soon be able to enjoy newer amenities on the third floor of the Health Professions Center.

“What we identified is that there are some programs that really needed additional space,” Ann White, dean of the College of Nursing and Health Professions said.

The third floor includes a fully-equipped kitchen for the Nutrition Department’s use along with new offices, classrooms, and lounge space.

The third-floor space was shared with the IU Med School until July 2018, when the new Stone Family Center for Health Sciences officially opened in early August. The $61 million medical school was a collaborative effort between Indiana University, University of Evansville and University of Southern Indiana.

Following the completion of the Stone Family Center for Health Sciences, the entire third floor of the HP Center was left for USI’s needs.

The classroom renovation and expansion project repurposed 26,000 square feet of space. It also enclosed four corner balconies to adjoin existing space, which added another 4,000 square feet to the floor.

White said a few programs including the Food and Nutrition program were in need of better-equipped facilities that would meet accreditation standards. She said the sonography program only had one classroom.

White said by giving some additional space, it works in the HP’s interest to better organize and coordinate the program. She said she is hopeful the project will be completed by spring break, with classes and students moving in shortly after.

“There are three classrooms, informatics lab, sonography lab and those are the ones that need some IT work done,” White said.

She said she doesn’t want to move classes upstairs until critical IT work is done.

White said because the university was able to move some of the previous residents down to the Stone Family Health Sciences Center, that allowed expansion of programs from the perspective of what is needed for accreditation and the need for capabilities of offering courses there.

She said that doesn’t mean OT and OTA will never intertwine.

“It just helped us better designate our areas so that we have better utilization of space and it made it kind of easier if you will to address course needs whether it be course time or lab time,” White said.

She said the building renovations have been overdue.

“We moved into this building in 1995-1996 but the cornerstone says 1994. We actually didn’t get into the building until after it was built,” she said. “It was built for what we were doing at that time.”

White said that Vice President for Finance and Administration Steve Bridges brought forward information when the building was opened.

“USI brought forward a request to the state for $48 million for the other three floors in the building,” White said. “I was told the $48 million for the three floors and possibility of extending the building outward on the ground floor and adding additional space. There is nothing absolute right now and we haven’t confirmed anything but we would look at additional space to share with Pott College.”

She said 1,000 students were in the College of Nursing in Health Professions when the building opened, today the college has just under 2,500 students.

“We have had huge growth of students, and we have tried to be as effective and efficient as we can,” she said “We have done some minor upgrades in specific areas but we haven’t done a total upgrade to it. We are in need of an upgrade.”

White said more student-oriented space, with study areas and additional food options, could be added into the extension of the building.

“We don’t have a lot of areas for people to just go and study, or charge up whatever they are using or small group work,” White said. “It just wasn’t built that way. So what we did on the third floor was address some of those student needs and issues.”

Along with a more open feel, benches and charging stations, an all-glass enclosed area is also part of the upgrades.

“I had a long discussion with the architect about the concern of safety, and this is the best possible glass they felt that it would be safe with this kind of arrangement,” she said. “What we tried to do was lighten up that third floor, it just really needed to be lifted it was pretty dark up there, they were trying to have more of that open space and environment perspective.”

White said the safety of the new floor is always a top issue.

“We spent considerable time talking about with this type of approach the safety component to it,” she said. “The university and architect reviewed it and assured me it was in accord and we could proceed forward with that.”

She said overall, having more space to accommodate student needs will only help further achieve the HP’s goals.

“We have had so much moving of the pieces in motion and we need to spend a little time getting settled and situated,” White said. “We think we have made the best decisions based on what we know. After we spend a little time here getting feedback from faculty and students, we may rethink it in a different approach, but right now it’s just really exciting to see what we have accomplished and will move forward with it, the accrediting bodies will be extremely pleased.”

“For the most part we are accredited and need to be, when you are a graduate from a program in order to get hired pretty much everybody is going and looking at if you are a graduate of an accredited program,” she said. “So we need to always be aware of those expectations, but now it gives us a better opportunity to meet them and a better opportunity to support those programs so they have that space they need and be fully functional and efficient at it.”