USI blasts off into space 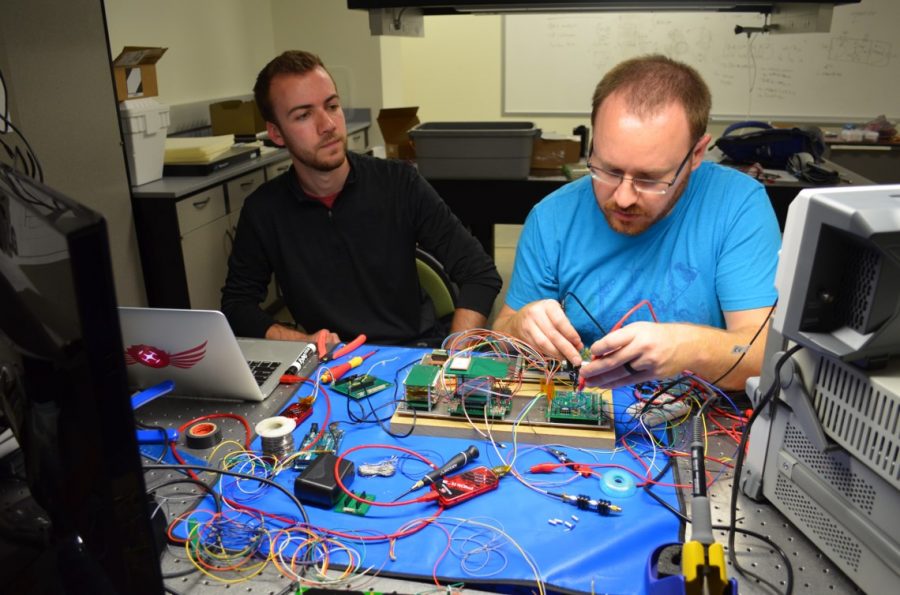 Editor’s note: On November 16, The Shield removed the story from online “To Infinity and beyond: Student satellite set to launch in 2019,” in the November 15 issue, because of an interview with a source who was not involved heavily with the project. The Shield has since removed the source and has added an updated story to print and online.

Ryan Loehrlein came to campus as a freshman and Dean of the Pott College of Science, Engineering, and Education, Zane Mitchell, gave him a tour of campus.

He learned Glen Kissel, an associate professor of engineering applied for a grant.

A grant to send a satellite into space.

“Once I heard the word, ‘space’ and ‘USI to be involved with it,’ I immediately asked him how I could jump in on the project,” Loehrlein said. “And he said if he got the grant I’d be asked to be on the team.”

Loehrlein, a senior engineering and finance major, said it felt amazing when the university received the grant.

“It was kind of a mind-blowing opportunity,” Loehrlein said. “I didn’t really expect a small university like USI to originally get a NASA grant for two hundred thousand dollars. So hearing we actually got it and that I could work on a satellite while at USI, it was, honestly, something I couldn’t even fathom at the time.”

The UNITE CubeSat project involved the student-led design and construction of a CubeSat, a miniaturized satellite.

“The GPS was designed to take position, velocity and time data and send it back down to the Earth so we could see the best orbit that the satellite was currently in,” Loehrlein said. “The flight dynamics would actually use some of that data we’re pulling down to the Earth to better understand how the satellite is going to re-enter into the Earth’s atmosphere, especially when we’re coming down into the lower ionosphere.”

Loehrlein is now the assistant team lead and helps with every subsystem. He will make hand calculations that make flight dynamics easier.

“I also would have to do simulations in the system called SGK to visualize what the satellite was going to do,” he said. “For the GPS, I did some of the same simulations like hand calculations, but I also had a lot more hands-on experience with actually designing and fabricating a circuit board which powers it on and integrating it into the satellite.”

Loehrlein said NASA had certain design requirements they had to meet for the satellite and each subsystem had to meet certain goals.

“We took the goals we were trying to meet and we designed it to actually meet those goals,” he said. “With the flight dynamic there wasn’t really as many goals to be met since we had to simulate and make sure the satellite was going to operate once we launched it, but for the GPS we had to make sure of the position, velocity and time/date.”

Loehrlein said throughout the process the team had to constantly check to see if it would work or not.

“We fully integrated the satellite and actually put it in the NanoRacks Pod, which is the deployer that is sending it up to the International Space Station and it will be launched from there (Tuesday),” he said. “…Once it is up there it can take approximately 1-3 months before it could actually get ejected into orbit around Earth.”

The 10-by-10-by-30 centimeter CubeSat will have three main science missions.

The first mission is for the team to understand the lower ionosphere, a part of the Earth’s upper atmosphere ionized by solar radiation, and will be probing plasma electronic ions to understand a little bit more about space weather. The second one is the GPS, which will tell them the position, velocity and time, and where the CubeSat is and how fast it is moving to understand the orbit.

The final portion of the mission involves temperature sensors.

Loehrlein said NASA is expecting the satellite to be ejected in late January.

“All of the members will be heavily involved because once it actually goes into orbit that’s kind of just making sure we verify the satellite and make sure its functioning fully,” he said. “But then the real mission is about a year later after it’s ejected, January of 2020. That’s when the main science mission and main data we are trying to collect is happening. So we’ll definitely be pretty heavily involved since we will be getting it launched out of the space station.”

Loehrlein said he is fortunate enough to be able to watch and be involved in the process from beginning to end.

“It’s an overwhelming experience, overwhelming in general. I never really expected I would be able to say ‘hey I built a satellite when I was doing my undergrad at USI,’” he said. “So just to make it at the beginning and still throughout the process, it says a lot about the team and the university. So I am honestly at a loss of words that this is actually happening.”

Loehrlein said a lot of time management was involved.

“Time management was the very key and as an engineering major it helps me grow in my courses because I had to learn different techniques to deal with all aspects of a satellite and I could apply that back to coursework,” he said. “So it was kind of knocking two birds out with one stone.”

Loehrlein said the best part of the project was working on it with his teammates.

“Sometimes you get bogged down into the details and the nitty gritty,” he said. “This team truly felt like a family from day one. When we all gathered at the initial meeting for the CubeSat, it wasn’t awkward there was no intimidation, we all felt like we were after one common goal and we could do it.”

Wyatt Helms, the team lead, has been involved in the project since the beginning. The senior engineering major is the head of the communications and power systems.

Helms said he has been interested in projects like these since he was twelve years old. He said he had lost interest for a while before he was approached by Kissel to work on the project.

The CubeSat will measure the electron ions it sees and temperatures in the lower ionosphere Helms said.

The CubeSat will also measure its own internal and external temperatures along with its orbital decay via the GPS.

“It’s been difficult, but it’s been a great learning opportunity,” Helms said. “I’m glad I got the opportunity to do it. I’ve met and worked with some really great people and I’ve also gotten to interact with pretty large corporations within the aerospace industry.”

Helms said he isn’t sure what he would do if he ever worked at NASA, but he thinks it would be similar to the research he’s done for the project.

Helms and Loehrlein delivered the UNITE CubeSat on Oct. 17, to the CubeSat deployer NanoRacks at their facility in Webster, Texas.

The CubeSat will be launched aboard the SpaceX Dragon Commercial Resupply-16 at 12:38 p.m., Tuesday from Launch Complex 40 at Cape Canaveral Air Force Station. Members of the USI UNITE team will be present at the VIP viewing site.

Loehrlein said the project helped him realize about his goals in life and how to work with people.

“Through this project, I didn’t ever really expect that I would be able to work on something within the aerospace industry this year,” Loehrlein said. “It’s kind of showed me that this is my desire and passion.”