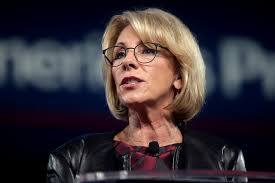 The 150-pages of new regulations will not take effect until the public is given 60 days to express their concerns in writing to the DOE.

The updated rules would grant students who are accused of sexual misconduct greater protections, while colleges and universities would be less liable when investigating complaints.

A person accused of sexual misconduct would be given the right to cross-examine their accuser in a hearing moderated by a lawyer or other adviser.

“Right now we don’t really have any type of hearing process and we don’t really provide an opportunity for the parties involved to cross-examine each other, so some of the new proposed rules would kind of affect how we do things here,” Lynn said. “They would require us to make some changes.”

The new cross-examination provision marks one of the most significant changes to the current policy. Obama-era Title IX guidance, which was rescinded by the Department of Education last year, discouraged cross-examination because of its potential to retraumatize victims.

“With the way the rules are now and the old rules, you could have the option of having some type of a hearing or administrative proceeding but you didn’t have to, so USI opted not to have any type of hearing or proceeding where the parties kind of confront each other,” Lynn said. “We decided not to take that type of approach but it sounds like the new legislation really contemplates that model.”

The potential policy changes would also require colleges and universities to act on a narrower definition of sexual harassment.

The new rules would define sexual harassment as the “unwelcome conduct on the basis of sex that is so severe, pervasive, and objectively offensive that it effectively denies a person equal access to the recipient’s education program or activity.”

The university, similarly to the new rules, defines sexual harassment as “unwelcome verbal or physical conduct that is sufficiently severe, persistent or pervasive that it unreasonably interferes with or denies/limits someone’s ability to participate in or benefit from the university’s programs and services, and is based on power differentials, the reaction of a hostile environment, or retaliation.”

The definition is more specific than the Obama administration’s definition of “unwelcome conduct of a sexual nature.”

USI uses the low standard preponderance of evidence standard which means it is more likely than not that the incident occurred.

Lynn said the standard has to be the same as what is used in code of conduct cases and the university will probably keep the standard.

Lynn said the university reviews its policies and procedures at the beginning of every year.

“My office really acts as a neutral presence on campus when it comes to Title IX cases, so I am not an advocate for victims but I am also not out defending the accused either,” she said. “That would still be our philosophy regardless of what the new regulations have.”