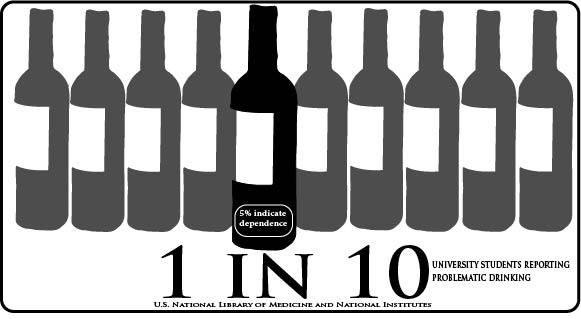 Nicole Mitchell, Special to The Shield

Sean Kennedy said the word “fraternity” at USI means much more than party-house.

“You’re here for college, you’re not here to party,” the Lambda Chi president said. “The whole purpose of our organization is to make men better men.”

Kennedy, a senior double major in history and psychology, said college is a culture shock, and Greek life is a great way for new students to get adjusted.

The NIC adopted a new alcohol policy Aug. 27 in response to a national issue of alcohol-related fraternity member deaths over the past two years.

The NIC press release announced that the policy “prohibits the presence of alcohol products above 15 percent ABV in any chapter facility or at any chapter event, except when served by a licensed third-party vendor.”

The policy protects the NIC and fraternity chapters by placing the responsibility of serving alcohol on a third-party bartender. The NIC said they felt it was critically important to implement a policy that protects students from alcohol-related hazing and over-consumption of high-percentage alcohol.

USI is a dry campus, according to the Dean of Students website and the student handbook. However, the policy does not prevent student organizations from having alcohol at social events off campus with the proper approval. The approval process and guidelines are available in section C.8 of The Student Rights and Responsibilities: A Code of Student Behavior handbook.

Kennedy said the NIC policy change will not impact the local IFC chapters because they already have the policy in their bylaws.

“University policy is what IFC falls under,” he said. “If you’re going to have a social event, and a social event is dictated as anything that has alcohol at it, you have to have a third-party licensed bartender.”

Kennedy said Greek social events off campus that are not catered by a third-party licensed bartender are considered bring-your-own-beverage and prohibit alcohol over 15 percent ABV.

The USI Fraternity and Sorority Policies and Guidelines don’t specifically define the allowable alcohol content, but they do provide numerous alcohol monitoring rules and encourage the chapters to socialize without alcohol. The rules include registering the event, providing security and monitoring guests to ensure alcohol is not distributed to people who are underage.

“Fraternities at USI aren’t like the fraternities you see in movies where they just party and go crazy all the time,” the junior marketing major said. “There’s a lot of good that we do for the community. Whether it’s raising money for charities or doing community service for elementary schools, there’s a lot more to it than partying.”

The university removed its recognition of fraternity Phi Delta Theta in December of 2017 after violating university policy on hazing and alcohol use.

“Student safety is of paramount importance to the university and members of the chapter have shown a pattern of disregard related to alcohol and hazing policies,” the university said in a statement.

The statement goes on to say that the removal of the fraternity’s recognition is justified because “these issues have proven to be systematic in nature and have not been corrected.”

Former Dean of Students Brian Rush said that while he believes there is a lot of good done by Greek organizations, they take these type of incidents very seriously.

“We cannot allow anything that is going to threaten our students or their potential to be successful on this campus,” he said.