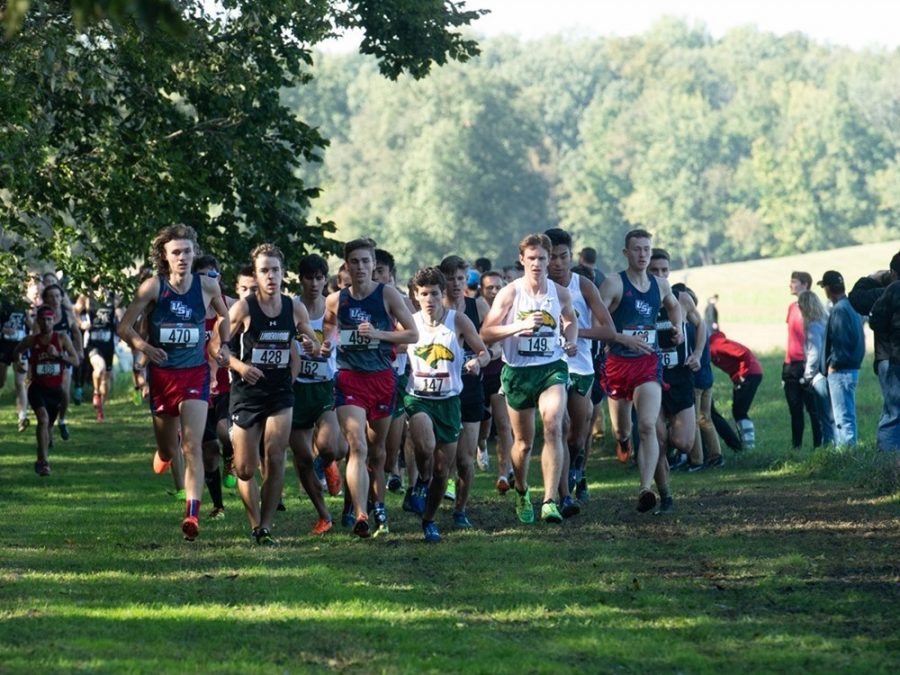 Titus Winder and Austin Nolan lead the pack of runners during a meet. The team will compete at "Tom Sawyer" State Park for the Great Lakes Valley Conference Championships Saturday

Austin Nolan is working to outrun his father.

The junior accounting and finance major has a goal to beat the school record of 23 minutes 43 seconds for the 5-mile race. The record was set in 1983 by Nolan’s dad, James.

“I was pretty close to running under 24 minutes for 8K this year, and I would like to do that next year,” Nolan said. “My dad is obviously proud of his record because it’s a great accomplishment, but he always says he hopes I break it.”

Coming into this season, Nolan was trying to be in the top 15-20 runners. As the season progressed, Nolan started setting his bar higher.

“It was more about how I approached races mentally,” Nolan said. “Running, like everyone says, is more of a mental sport than physical. Instead of saying I wanted to be in the top 20, this year I am going into every race thinking, ‘I’m going to win, I’m going to try to win this race,’ and that’s been the main difference.”

The team began its season with a rough start. It was already a young team with six freshmen, but early injuries made success even more difficult to obtain.

“We’re kind of under the radar,” Nolan said. “At the beginning of the year, they had us ranked really high, and then we had one or two bad races as a team, and they dropped us and now we’re coming back.”

Nolan has done his best to be an encouragement to his younger teammates.

“I’ve been trying to help them in workouts and stuff,” Nolan said. “I tell them, ‘this is the point where you have to make that mental decision of whether or not you are going to commit. This is where it gets tough.’”

Titus Winders said Nolan has been a mentor to him.

“It may not sound like a lot to someone who hadn’t experienced it first-hand, but it’s just really been nice to have him,” the freshman biology major said. “I can’t explain enough how he’s just been so encouraging and how he’s motivated me.”

Winders said his goals this year were to improve his time, be in the top five and encourage his teammates to achieve their goals. He said Nolan’s influence has made him want to be more motivating to his teammates.

“It’s always fun to see your teammates and friends achieve their running goals too,” Winders said.

Winders said he has enjoyed the dynamic of the team. During the first week of school, the team went to cross country camp together, and Winders said the trip bonded the team.

“We just sitting around joking and a couple of the guys were making up raps and they were really silly but they were fun,” Winders said. “It was simple, but I think somehow being away from campus with no distractions, and all of us just sitting there acting silly was really good team bonding.”

Nolan said he is confident going into regionals.

“Our midwest regional is Saturday, and I’m ranked 8th in the national meet, so once that time comes around I don’t see a point in shooting for top five or top 10,” Nolan said. “If you’re that close you might as well be trying to win.”