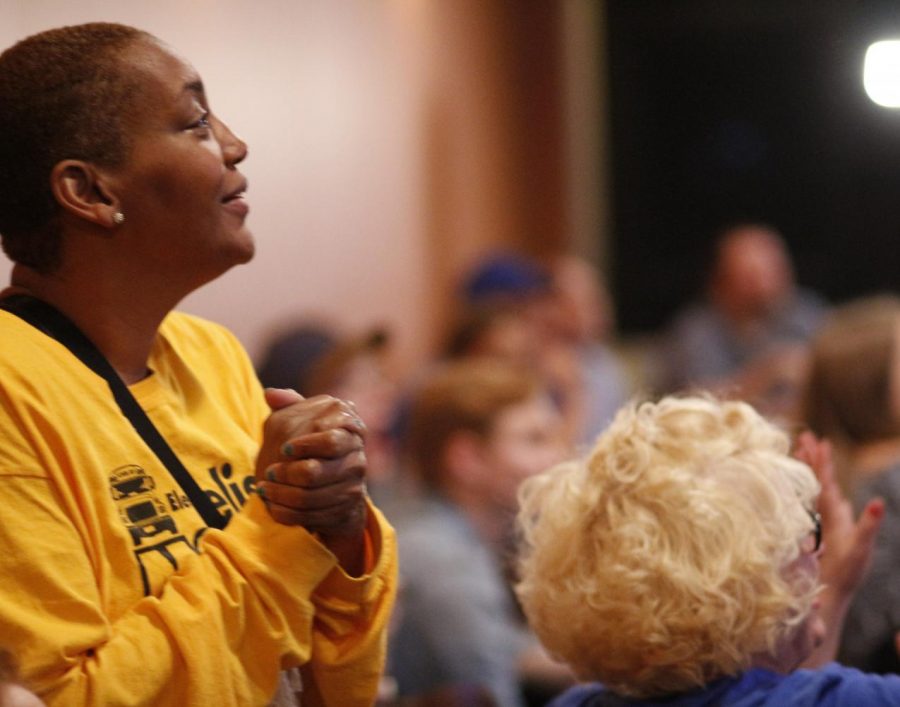 Melissa Moore, EVSC School Board Candidate, waits expectantly for the results of the election Tuesday night.

Jeff Hatfield broke out in a smile as he was announced as the newest Vanderburgh County Commissioner.

His friends and family erupted in cheers and applause, hugging each other as they wiped away tears.

“We worked on this every day for 6 months,” Hatfield, D-Evansville, said. “I have an enormously talented family. I had help from hundreds of people so it was just an amazing effort and I had a great time I loved it. I loved campaigning and I’m just glad that today is here.”

Hatfield was one of the many candidates who came to the Democratic watch party to see the results come in Tuesday evening.

Although the Democrats won the U.S. House of Representatives and Hatfield celebrated his win, Democrats in Evansville received a major blow.

Hatfield said the possibility of a Democrat majority in the House is needed.

“In our politics, people need to put their swords away and after election day and get some stuff done for the American people,” Hatfield said. “There are people that are hurting. There are people that need good jobs. I know we have low unemployment rates but what I look at is what are people earning. It doesn’t help us if we become a nation of minimum wage workers.”

Sophomore Geology major Issac Hensen showed up to the voting polls at 8 a.m. to talk to voters.

Hensen said he held the doors open for people at Washington Square Mall and tried to tell them why they should vote for Secretary of State candidate Jim Harper and 8th District United States Representative candidate William Tanoos.

Hensen said he came to the watch party because he wanted to see Democrats take control of the House.

“I feel like especially over the past two years a lot of voters are angry with the Trump administration I feel like there is kind of some displeasure over the legislation that has been introduced throughout the two years that Trump has been in office,” Hensen said. “Just to see the lines that were at the poles that was definitely encouraging so I would say that voter turnout definitely increased this year.”

Sophomore Criminal Justice and Education major Sarah Schnautz came to the watch party because she said she thinks it’s important to vote. She said it is also cool to interact with the candidates as the votes are coming in.

Schnautz said the outcomes of the races have surprised her.

“I thought some of the races would be a little bit closer,” Schnautz said. “I didn’t think Joe Donnelly would have to concede. I thought a lot of people that were pretty moderate would vote for him but it turns out that a lot of those voters went the other way. Mike Braun had a lot of support from national leaders and the president so I think that really helped him and in that race and so that one sort of surprised me.”

Schnautz said she feels like the student perception on voting is changing.

“It seems like this election got a lot more people interested that maybe wouldn’t have been otherwise,” Schnautz said. “I think a lot of things are changing right now a lot of social issues healthcare and I think that motivates people. They realize if they sit back and let all of this happen without voicing their opinion, then that’s not right. How can they say that it’s not okay if they didn’t do anything to change it?”