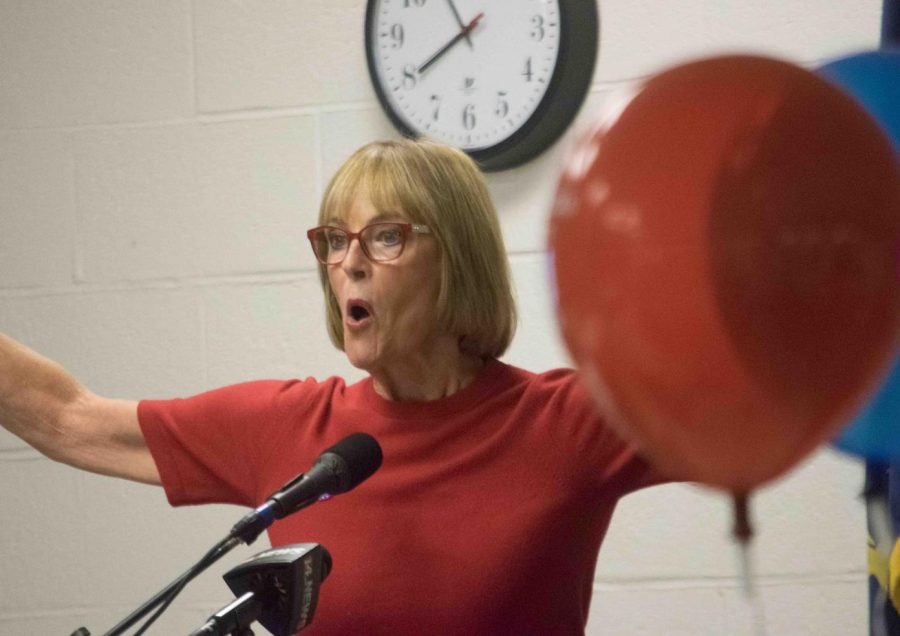 Lt. Governor Suzanne Crouch said that she believes Hoosiers believe that Indiana is headed in the right direction.

Republicans in Indiana swept into a crucial victory that determined the fate of the United States Senate during Tuesday’s midterm elections.

The atmosphere inside the C.K. Newsome Community Center was jubilant but relatively empty at the Vanderburgh County Republican Party’s watch party in downtown Evansville.

U.S. Rep. Larry Bucshon took the podium to thank supporters after his landslide victory of close to 65 percent of the total vote.

“I feel great. It’s an honor and privilege to be re-elected and represent the 8th district,” Bucshon, who will serve his fifth consecutive term, said. “I am very humbled by my win and I want to thank all of my supporters.”

Bucshon said he is looking forward to serving Hoosiers for another two years.

“The people in this district support me, and I want to make it clear, I represent 100 percent of the people in the 8th congressional district,” he said.

Bucshon said even if they do not always agree, he wants to find common ground.

Lt. Governor Suzanne Crouch, R-IN, said that she believes Hoosiers believe that Indiana is headed in the right direction.

“That is due to Republican leadership at the state level,” she said. “But I also believe that Hoosiers support President Trump, and they believe that the Senate needs to have more Republican representation to have that support.”

She said because historically Indiana has been a Republican state, she was not surprised at all by Senator-elect Mike Braun’s win,

“I had indicated all along that I thought he would win because this election cycle is no different than 2016,” she said. “Other than our economy is better, we feel safer in the world and people are prouder, and so that to me means that we continue to support the leadership and direction we are going in.”

Vanderburgh County GOP Political Director Mary Jo Kaiser said before any of the polls closed that early voting turnout had been remarkable.

“(Tuesday) there were lines at every poll,” she said. “So I think our numbers are going to be extremely large, which is great.”

Kaiser said her phone had been ringing off the hook all day with Republican voters asking questions. She said the Vanderburgh GOP had not received reports of any issues with machines in the county.

The biggest race of the night for Republicans was the pivotal Senate race, but Kaiser said she knew Republican candidate Mike Braun would win.

“I think Donnelly has answered the questions, but he will answer differently when I ask questions, he doesn’t have the same answer,” she said. “My big concern is how nasty the race got, how bitter it was and then the things that would be on TV against one or another.”

She said she thought it was wrong for either candidate to end their respective advertisement that they had not approved their message.

Chairman of the Vanderburgh Republican Party Wayne Parke said he was optimistic going into the midterm elections. He said that he saw no issues at voting sites, and overall everything went very smoothly.

Jennifer Stilwell, a 2006 USI graduate, was at Tuesday’s GOP watch party. She said she votes in every election cycle. She earned her undergraduate degree in advertising and public relations and recently received her Masters of Business Administration (MBA) this year.

“I make sure to exercise my right to vote,” she said. “This year was extra exciting because President Trump came to Evansville and pumped us up to vote for Mike Braun.”

She said she likes to vote early and make sure she gets to the polls as soon as possible.

“I am happy with the results, and Trump will have a good team working with him, and I am looking forward to exciting new projects and new initiatives,” she said.

“It was scary at first because it was my first time voting, but I felt really good after voting,” she said. “Everyone was nice and helpful at the polls, for the election I hope to see the impact and results of the get out and vote movement.”