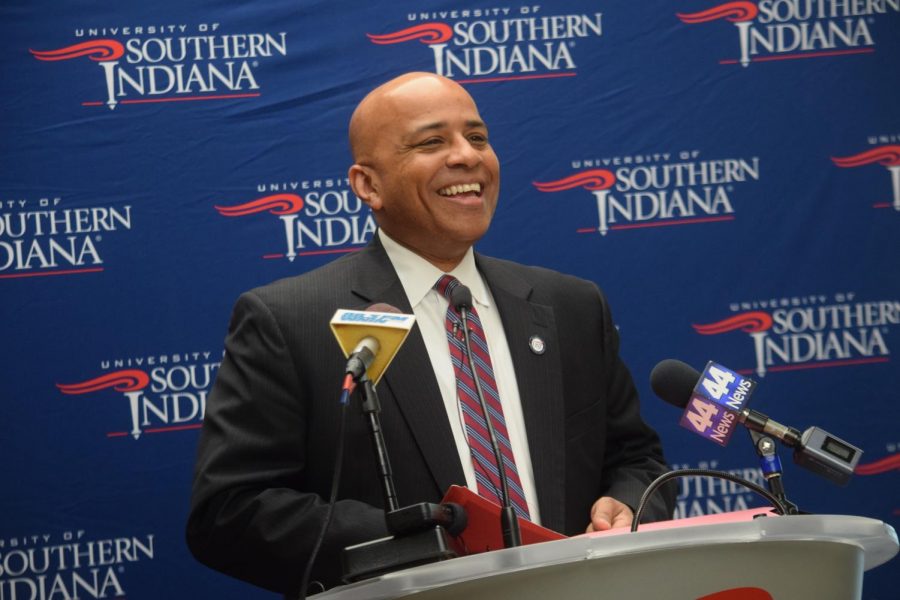 The Board of Trustees named Provost Ron Rochon as the university's fourth president Thursday afternoon. Rochon will officially assume his duties as president July 1.

Ron Rochon said being president has been busier than he ever anticipated.

“People tell you and they kind of prepare you for the schedule, but until you get in the chair, you just don’t understand the kind of demands that are on the office of the president, so that’s been revealing as I move forward,” said Rochon, who was selected by the Board of Trustees unanimously as the university’s fourth president in April.

He said the first few months of his presidency have been exciting and invigorating, and meeting with elected officials, alumni and academic leaders has been a wonderful opportunity.

Rochon said one of the biggest changes to higher education since he entered the field has been the technology, specifically how people communicate with each other.

“When I was a student, it was overwhelmingly a model where the student went to the professor’s office, you had a face-to-face and you were very dependent on that kind of immediate feedback,” he said. “Now things are much more demanding with regard to immediate responses, and so students, they email faculty, they email administrators, they ask for significant kinds of opportunities or queries about classes through email. I wasn’t used to that at all going to school. That just wasn’t a part of our option.”

Rochon said because of the new technology, universities have changed the way they teach.

These new teaching methods have culminated in the increase in online classes and programs.

The university currently offers seven online graduate programs, and about 60 to 70 percent of students who graduated this year took at least one online course, according to Rochon.

He said students have been the primary driving force behind the need for more online programs.

“USI has been extremely responsive to the needs of constituent groups in the community with regards to online instruction, but we have more work to do,” he said. “If we don’t offer it, they will go somewhere else.”

The university has particularly struggled with minority enrollment in the past.

Minorities made up 11.9 percent of students in 2017 according to the university’s fact book.

“The number of students of color attending the University of Southern Indiana as well as other institutions in the state and regionally are still challenging for us,” Rochon, who is the only minority president at a public institution in Indiana, said. “We have to find ways in which we can enhance those opportunities, enhance that discussion for families who have quite often either been left in the margins or not been exposed to higher education directly.”

Rochon said he has encouraged student leaders across the university to get minority students more involved.

“Acclimating to a predominately white environment is not all that easy for everyone,” he said. “We have to collectively work on this across the university and that excites me with our possibility to attract additional people to not only attend USI, but work at USI.”

Rochon also stressed the importance that student debt plays in the university’s mission.

“We are always talking about this,” he said. “We don’t want to put students in a position where they cannot be successful academically, and if finances are preventing that from happening, we want to find ways we can get in front of that to best advise students.”

As of 2018, there are more than 44 million borrowers who collectively owe over $1.5 trillion in student loan debt in the United States according to student loan calculator Make Lemonade.

“Getting students the best advice possible is so important,” Rochon said. “We are always looking at student debt, looking at ways in which we can better advise students and direct students.”

After the university saw undergraduate and graduate enrollment drop below 9,000 for the first time since 1999, Rochon said that while they will focus on new recruitment strategies for next fall’s enrollment, it has always been a focus for them.

“We have been talking about enrollment for next fall, the day after I became President,” he said. “Dr. Bennett never rested on enrollment discussions. It was always her mantra, and it is now my mantra.”

One of Rochon’s responsibilities as president is to lobby the Ways and Means Committee of the Indiana State Legislature for state appropriations before they vote on the biennial budget.

Rochon said he talked to the chairman of the committee (R) Tim Brown earlier this year and plans to express appreciation for the legislature’s time and investment during his presentation in March.

“We are focused on servicing the state,” he said. “We are in the southwest corner, but our students are coming from all over Indiana, and many of them when they graduate, they go back to their respective counties.”

“I think over the coming decades, we are going to see major change at USI with regard to its footprint, it’s outreach but also with enrollment,” Rochon said. “I think all kind so aspects of growth are overwhelmingly possible and probable.”

He said the university is generating a strong reputation for the region and the state and is producing students to leave and do “amazing” things in their profession.

“I am excited about what is to come,” he said.

Phase I of construction of the Physical Activities Center (PAC), which includes 4,000 additional seats for a new arena and 5,000 feet of space for the renovation of the kinesiology lab, along with more concession space and an upgraded spirit store, is expected to be completed before the arrival of former Secretary of State Colin Powell’s presentation in April.

Rochon said students will need to participate more in sporting events in order for the campus to grow its facilities.

“In order for us to see additional venues occur and develop here at USI, we have to validate and demonstrate clearly that there is a need,” Rochon said “If we have a building like the arena that sits empty, we can’t get students and the community to come out and support, it’s going to be very difficult for us to request other kinds of resources from the state and from donors.”

Rochon said he wants to make sure that donors investments are going to something that’s beneficial and has a return.

“I know we are all busy, but there are ways in which we can find a couple of games that we can attend and if we all rotated, that ‘this season, I am showing up to two events,’” he said. “That right there would blend into a culture of attendance.”

With the rise of social media in student’s daily lives, Rochon said he is concerned with how many hours of the day students are spending on the platforms.

Ninety-four percent of teens who go online using a mobile device do so daily, and 71 percent of teens say they use more than one social media site according to a Pew survey conducted in 2014 and 2015.

Rochon, who does not have any personal social media accounts, said they have a lot of downfalls, and it is just something he chooses not to utilize at this time in his life.

“I have nothing against social media, but it is just not something that excites me,” he said. “Social media I think is an amazing tool that is wonderfully utilized by many, but I’ve seen it abused, I’ve seen it destroy, I’ve seen it distract.”