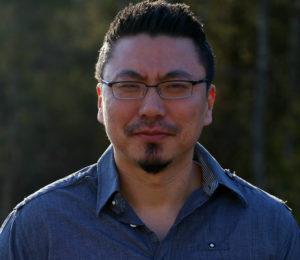 James Han Mattson will present his novel, "The Lost Prayers of Ricky Graves" Nov. 8 in Klemeyer Hall at 4:30 p.m.

James Han Mattson was working part-time at a hotel in north Berkeley, California when he got an idea while reading a book by Clive Barker.

“I remember reading it and thinking, ‘I could probably do this a little better,’” Mattson said. “Not that Clive Barker isn’t a fantastic writer, but there are some things that I thought I could do better, so I just decided then that I would just write.”

Mattson will read excerpts from his debut novel from 4:30 p.m. to 5:30 p.m. Nov. 8 in Klemeyer Hall as a part of the Southern Indiana Reading Series.

Mattson’s first published book, “The Lost Prayers of Ricky Graves,” is a multi-perspective narrative following several high school students after a shooting committed by their classmate, Ricky Graves. The book deals with themes of sexuality, bullying and social media and uses chat rooms and emails to tell the story.

Mattson started writing when he was in his early twenties and originally wanted to be a horror writer. Mattson wrote two horror novels that were never published.

“After I wrote a book, I realized that I could actually do it so I just kept going,” Mattson said.

At first, Mattson didn’t think “The Lost Prayers of Ricky Graves” would be published since it was rejected the first two times his agent sent it out. But after the third round of sending the book to publishers, it received interest from Little A, an imprint of Amazon Publishing, before it was picked up for publishing.

“It sounds like a simple process, but it’s actually quite difficult and time-consuming and psychologically damaging,” Mattson said. “It ended up working out well in the end, but it was just a long process.”

Mattson said his book was partially inspired by the story of Tyler Clementi. Clementi was a student at Rutgers University who committed suicide in 2010 after his roommate used a webcam to film Clementi kissing another man in their dorm and posting the footage to social media.

“I remember reading that story and feeling it kind of like a gut punch,” Mattson said. “And usually, when I have that kind of feeling, I want to write something about it.”

It took Mattson five years of writing before he got the book to his agent. Mattson said he wrote about six or seven drafts. The original version of the story had 25 different characters before Mattson cut it down to six.

“The process of revision and resculpting the book was chopping off a whole bunch of characters and broadening other characters,” Mattson said.

One of the major themes of “The Lost Prayers of Ricky Graves” is sexuality. The main character, Ricky, is gay and in-the-closet before he commits the shooting.

“It’s intensely personal for me,” Mattson said. “I grew up in North Dakota as a gay kid, and when you’re in that environment, it’s really alienating and isolating to feel so different. And that’s what I wanted to capture in Ricky, but I wanted to do it in more present-day terms, so I incorporated technology in there, and hopefully that resonated with readers.”

Assistant Professor of English Casey Pycior helped coordinate the event. Pycior wanted to promote artists in the region, so he sent Mattson an email to be a part of the series.

“There’s a wealth of really excellent writers in the region and we like to do our part to promote those writers the best we can,” Pycior said.

Pycior said it’s important for students to see that there are really great writers in this area.
“Students think that the only people doing really great work are people on the coasts,” Pycior said. “We like to try to show that great art is being made everywhere, especially here.”

Pycior tells students they need to attend these events because they never know what a transformative experience it might be.

“I think you can talk to people who make art, and that’s a really special thing,” Pycior said. “And I think students need to take advantage of these opportunities while they can because when you’re out of college it’s a lot harder to find these kinds of events.”

Mattson is the final reading series event of this semester. Next semester, Elena Passarello and Hanif Abdurraqib will read together in February.

Mattson said he hoped anyone who has felt isolated or ostracized could find threads in his book that speak to their experience.

“I think college, in general, can be a really exciting time and it can be a very confusing time,” Mattson said. “It’s the first time most people are away from home. It’s the first time people are being exposed to drastically different views than their own, and sometimes that can result in this sense of confusion and isolation.”

The event is free and open to the public with a Q&A after and a reception with snacks and refreshments. Mattson’s book will be available for purchase at the event.

“To anybody who has felt like an outsider, I hope there’s some sort of appeal to (the book),” Mattson said. “There’s plenty of college students, I think, who feel like outsiders.”