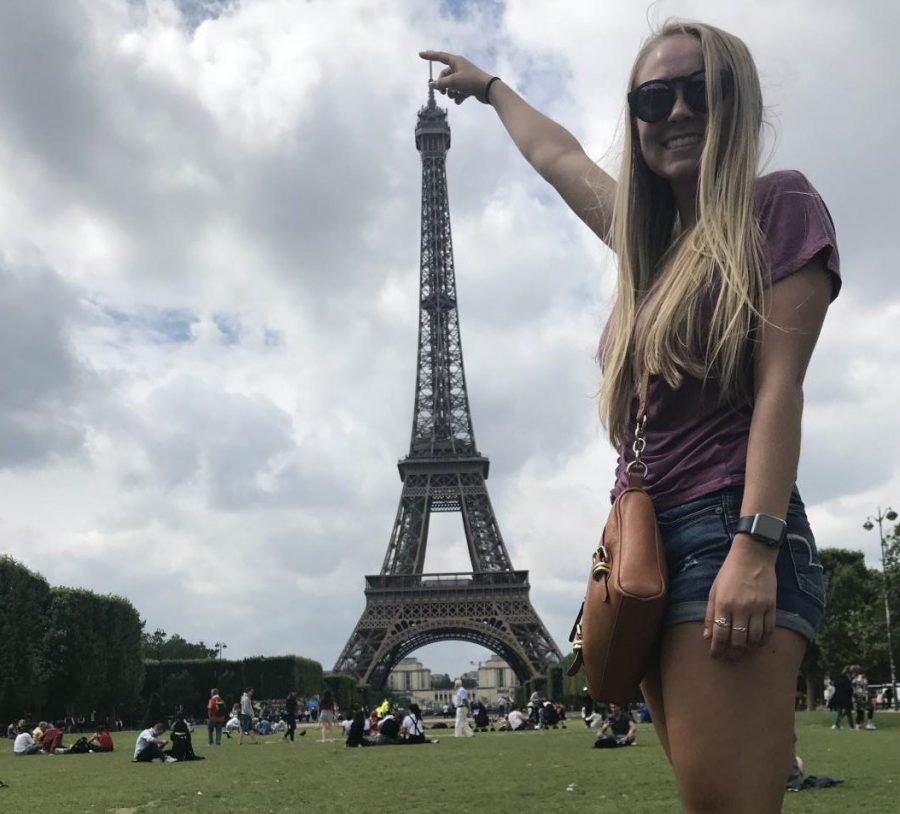 Emma Luczkowski spent five and a half weeks at Harlaxton College in Grantham, England.

Every week The Shield will feature a student who spent time in another country over the summer. This week, The Shield interviewed senior communication studies and public relations major Emma Luczkowski about her study abroad trip to Harlaxton College in Grantham, England.

The Shield: Where did you go over the summer?

Luczkowski: I studied abroad at Harlaxton College in Grantham, England.

The Shield: What classes did you take while you were there?

Luczkowski: I only took one class because it was a six-week trip. So, I took social aspects of sports. Basically, just any sports sociology class. The class itself I got to go on five or six field trips to different stadiums in England. I got to see their Leicester Tiger Stadium, some rugby stadiums and the London Olympic Park and go to the different buildings that were used there. I took one class a day for five and a half weeks, and then at the end, I did a school-sponsored trip to Italy, and every weekend I was also able to travel.

The Shield: Tell me all the different places that you went.

Luczkowski: I was based in England, and then I visited London and Stanford and Nottingham, England. Then I went to Switzerland, Ireland, Spain, France and Italy.

The Shield: Of all of those trips, which was your favorite?

Luczkowski: Switzerland, probably, even though it was the most expensive. The view that we had from our hotel room was just mountains and water and it was extremely beautiful, and I got to do paragliding there and a culture tour. I got to try all the different cheeses they make. It was just cool to see all they do in Switzerland and everyone there was extremely nice.

The Shield: Had you ever studied abroad before?

Luczkowski: No. It was my first time in Europe, too. So, everything was a new experience for me.

The Shield: For studying abroad, did you look at going anywhere else or was this your number one choice?

Luczkowski: My sister actually did Harlaxton a couple years ago, so I had already known that I wanted to do Harlaxton. I already knew the main things about it and I knew it was an affordable way for me to travel and study abroad. It worked well because I am on the soccer team here and I knew it was offered in the summer, so I could go and not miss mandatory practices, games or in-season things. That was basically the only program I really looked at.

The Shield: Since you sister went, you probably had a little bit of background knowledge and expectations going in. How was the trip different than what you expected?

Luczkowski: I went to a couple of the same countries that she did, but I also branched out and went to other countries, and I didn’t really expect budget-wise how little things cost in other countries or when I went to Switzerland, everything was expensive. I got a burger for 10 dollars and that did not include a drink or a side or anything. It made me realize that here in the U.S. it’s not as expensive to go out to eat for a single person. In other countries, I could go out and get a burger or pasta for less than I could in the United States. Seeing the different cultures and things I got to see opened my eyes to new things as well.

The Shield: How do you feel the trip benefited you in your major?

Luczkowski: I was definitely able to step out of comfort zones. Even though I am a communications major, I am still pretty introverted, and I don’t really like talking to people unless I’m really comfortable with them, but being put in a dorm room basically with three other girls I didn’t know before going, I really had to open up and kind of speed up the process of getting to know people. So, I was able to get out of my comfort zone and start talking to people. I think there were 70ish people in the program and I came out of it knowing almost every single one of them. I was really able to start making connections quicker than before.

The Shield: Did anyone else from USI go on this trip?

Luczkowski: Yes, a girl named Katie Pence went. I think she was the only other one.

The Shield: You mentioned you play soccer here. So, going to those different sports stadiums and things like that, what was that like?

Luczkowski: It was really cool. So, a lot of them were soccer stadiums or rugby stadiums. I got to learn how to play rugby, which I never thought I would ever do that. It kind of makes me feel like soccer is not actually as physical as other sports, but, it’s kind of comparable. Just being able to see Wembley Stadium and going to visit one of the larger soccer stadiums in the world, it was really cool. It was also able to go to Camp Nou for FC Barcelona and that is the biggest stadium in the world. Just being able to see the field from high above and sitting in a seat pretending I was watching a game.

The Shield: How do you think it influenced your trip, not knowing very much about their culture before you went?

Luczkowski: I didn’t know as much going in as I maybe should have learned. But going there and being able to experience it first-hand and learning it that way, I thought was cooler. It’s a better way for me to learn things. I would rather be immersed in the culture than sitting in a classroom being told how their culture is. So, I liked having that be first hand.

The Shield: Do you think you will try to travel more after this?

Luczkowski: Definitely. When I can raise my funds, I would love to go back to Spain or even Switzerland and France to see more than what I did. I was only there for three days because it was only a weekend trip. So, I didn’t see as much as I wanted. I would definitely go back and explore more places.

The Shield: Why would you encourage students to go while they are still in school?

Luczkowski: Doing a study abroad program is more affordable than people think, and you’re able to gain so much from it. I’m a study abroad ambassador for the USI program and they talk about all the different ways studying abroad can help boost your resume. It really can help you later on in your career when you’re trying to find a job out of college.