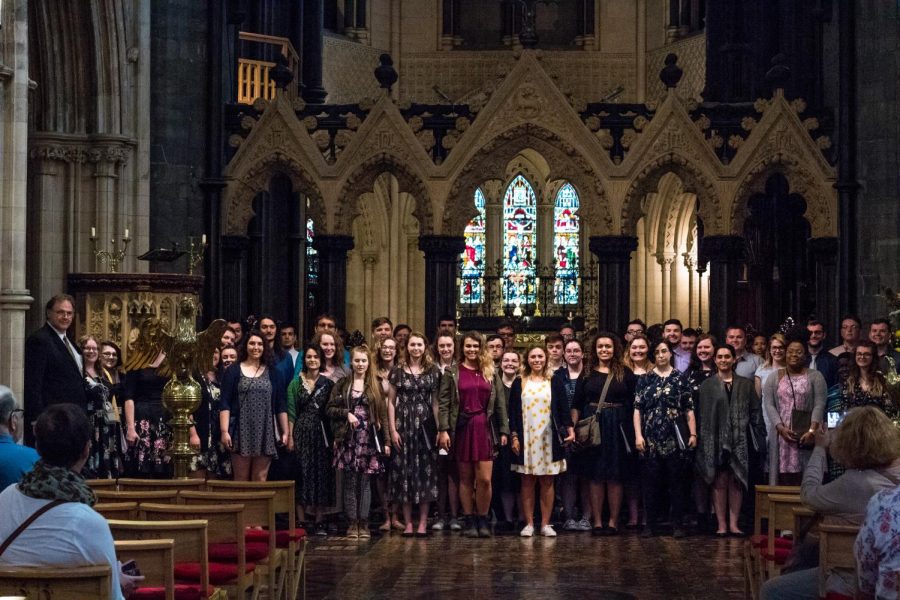 The university Chamber Choir traveled to Ireland for the Mayo International Choral Festival Premiere Competition, placing second in sacred music and first in the four-part choir competition out of 38 other choirs. The choir won first overall.

Every week The shield will feature a student who spent time in another country over the summer. This week, Benjamin Ulrich shared about his time in Ireland with the university Chamber Choir for their annual participation in the Mayo International Choral Festival Premiere Competition.

When the students of the Chamber Choir began to board the plane to Ireland, Benjamin Ulrich felt his heart racing.

“I panicked,” the sophomore radio and television major said. “I’d never been out of the country.”

Ulrich said he had never flown before, and though he was worried, as he sat in his window seat, he knew the flight wouldn’t be bad.

“It was like nothing compared to what I thought it was. You’re just sitting in a capsule with seats,” Ulrich said. “I’ve never had that much fun in my life. It was really amazing to get the experience to go across the ocean.”

Ulrich was one of the members of the university’s Chamber Choir traveling to Ireland in early May. The choir competed in the Mayo International Choral Festival Premiere Competition, placing second in sacred music and first in the four-part choir competition out of 38 other choirs.

As the only United States choir in the competition, Ulrich said he felt like they were all treated as a high priority.

“When we got there everyone knew who we were in the entire country of Ireland,” Ulrich said. “We would go anywhere and be like ‘yeah, we’re the University of Southern Indiana choir at the Mayo International Festival,’ and everybody knew exactly what that was.”

Ulrich said since the choir was in Ireland for nearly two weeks, the group had time to visit many of the amazing sights.

“My favorite part about the entire thing was when we went to the cliffs of Moher,” Ulrich said.  “And fun fact about that place, there’s a scene of ‘Harry Potter’ that was shot there.”

Ulrich was also able to tour a college in Dublin including its library which was also used to film the Hogwarts library.

“It was super cool to be there because they had little dots on the ground that said, ‘Harry Potter stood here.’”

Director of the Chamber Choir Daniel Craig said the choir has a tradition of going overseas to perform concerts.

“It’s a great way for our students to get that international experience and to do it very inexpensively.”

The program director for university music said when the choir arrived he realized there was an “entirely different clientele of choirs— that made us stop and think for a bit.”

Craig said he was unsure what the placements would show.

“The gentleman who announced the awards said it like this: ‘with very little clear water between the two groups.’ I was thrilled. What an honor,” Craig said. “Here is the director of the Royal Chorus of the UK who said we were worthy.”

Craig said the group also received prize money for their placement, but donated the money to local schools.

“Our group always likes to be able to help,” Craig said. “Why not give it to the local elementary schools to help them fund music. That puts us in a position where we’re able to only go sing but to go serve. And I think that’s a big important part, music has to serve humanity not just entertain humanity.”

Ulrich said he enjoyed the experience, but after the long trip, he was ready to board the plane and head home.

“It was a really, really good feeling to be having fun in another country, singing songs, doing what we all loved.”