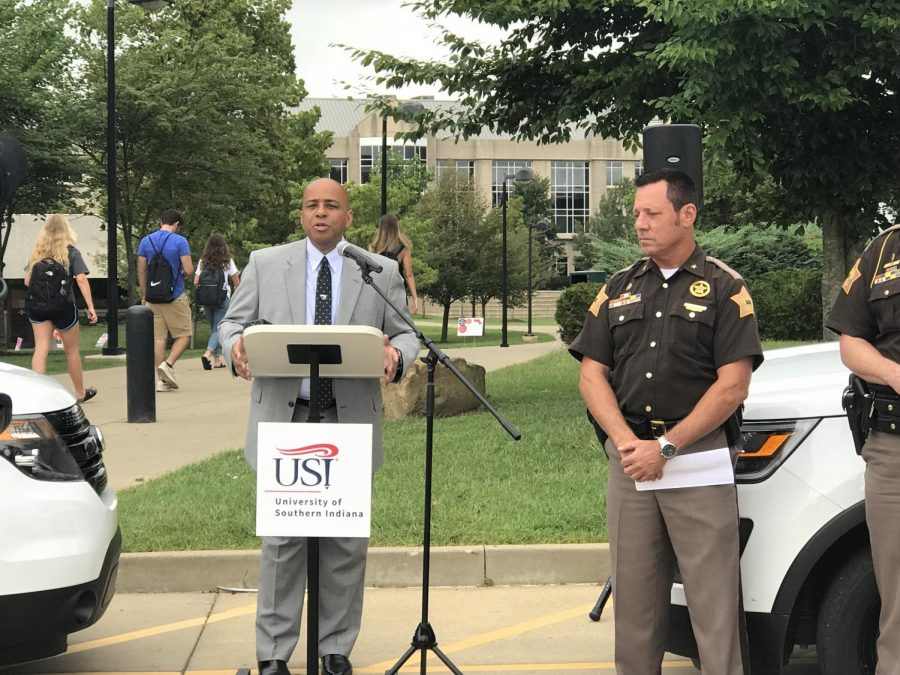 Raindrops fell as USI officials and Vanderburgh County Sheriff’s deputies gathered to formally announce an agreement between the university and sheriff’s office.

Five full-time sheriff deputies will be patrolling on campus as part of the newly created USI Patrol Unit within VCSO’s Operations Division.

President Ronald Rochon said he previously met with Sheriff Dave Wedding and discussed university safety while he was still provost.

“It was actually at a picnic within the community where we were just having a discussion about the possibilities of a partnership,” Rochon said. “Lo and behold, that conversation spawned something very special for USI and for the sheriff’s office.”

Rochon, who grew up in Chicago, Illinois, said his father served as a police officer for 30 years and understanding the needs and gifts law enforcement brings is “something that is special to (him) and very sincere.”

Public Safety will continue to be the primary reporting organization related to crimes in the university community. The on-campus deputies will work with Public Safety to assure that information, requests and complaints are shared with the community.

Vice President for Finance and Administration Steve Bridges said a new sheriff’s office is still part of the plan.

“We have not specified the location yet, but it is part of the funding we received for Phase II of the PAC renovation,” Bridges said. “That was a sub-project of that, so we are looking to determine the exact location, but we will have an area that is very responsive to campus.”

He said as the campus grows and changes, the response time per area changes, so the university is looking to find a good central location.

“At this point, they will occupy space in our Public Safety building located by the University Center,” Bridges said.

Bridges said there are plans to expand space to accommodate the current Public Safety office as well as the sheriff’s office. He said the cost for five deputies on campus each year totals $450,000.

The state is funding a $750,000 annual line item in the university’s budget for campus security, which is separate from the one-time funding request for PAC renovations.

Funds in the line item beyond the cost of operations and equipment for the deputies will be used for additional campus security enhancements not related to the partnership with VCSO.

Wedding said that in addition to the five deputies, the VCSO will also encourage the regular patrol section to come on campus.

“It is very important to protect our campuses,” Wedding said. “We hope we never have this kind of act of violence on campus. It may never occur, but we want to be prepared in the event that something like that did occur or we had to have a rapid response to a violent situation.”

He said the biggest focus will be on interacting with students and handling day to day calls.