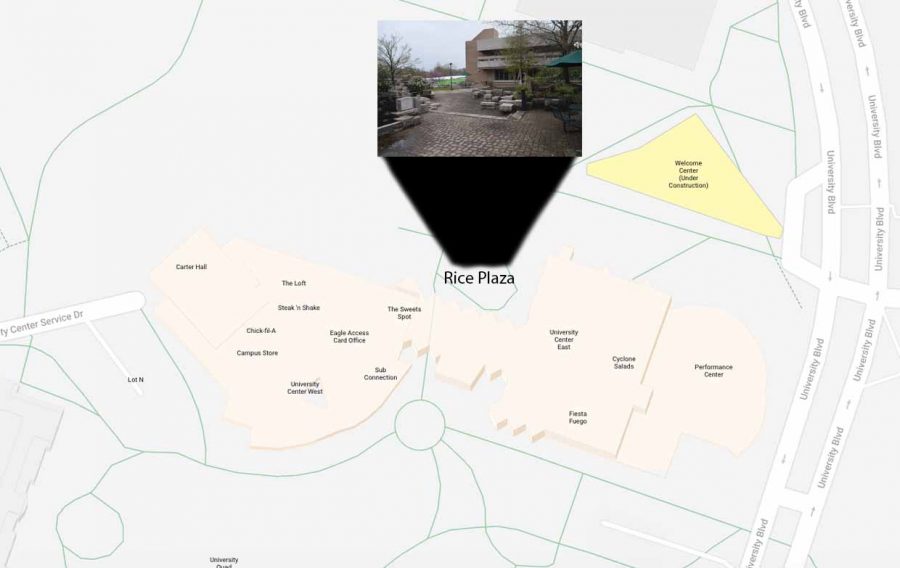 Agencies are also investigating the posters along with a “suspicious person who may have been carrying a gun.”

The email did not indicate when the incidents occurred.

According to the university’s crime log, an information only incident report was filed at 8:40 a.m. on Monday in Rice Plaza.

Vice President of Marketing and Communications, Kindra Strupp, said three neo-nazi posters were found in the Rice Plaza – the fountain area north of the university center – taped to the green outdoor tables.

She said the posters contained text and images that were racist with neo-nazi threatening language.

Strupp said due to commencement happening this weekend, it’s important for the campus community to “remain vigilant.”

Vanderburgh County Sheriff’s Department Lieutenant Noah Robinson said he received a briefing today regarding the posters and “the suspicious person who potentially had a handgun.”

He said at this time the deputies on campus have been made aware and they are in close communication with Public Safety.

Robinson said they have not been asked to open an investigation due to the suspicious person report.

“As far as an allegation of a criminal act, we weren’t made aware of any crime,” he said. “But honestly someone carrying a firearm out there isn’t against the law but it is against campus policy and concerning to us. We are working with the university to make sure it doesn’t happen again.”

Robinson said every year they have deputies spying during commencement and will be more aware.

Although they are not on heightened alert, he said they are being cautious about it.

“We have a great working relationship with Public Safety,” Robinson said. “And we are keeping an eye out to see if this individual returns and making sure everyone follows the university rules with posting written material on campus.”

In the middle of last week, a man was photographed by Public Safety’s security cameras with what appeared to be a firearm.

According to the university’s crime log, a “suspicious person,” was on campus at the Rice Library at 3:08 p.m. Wednesday, April 18.

Strupp said the male was located in Rice Library and the security cameras show him with something on his side around the belt area.

“It’s difficult to tell and we can’t be certain,” she said. “It’s important to remind people that no firearms or weapons are allowed…and in light of commencement and national discussion, we want students and outside members to know we don’t allow firearms on this campus.”

Although photographs were taken of the individual, Strupp said Public Safety was not made aware until the person was gone, because they “cannot be everywhere at once.”

Strupp said that is why they use the cameras and want the campus to be on the lookout for anything suspicious.

She said the reason why the university didn’t go into a lockdown because there was “no imminent danger at that time other than violating school policy, which is still a problem, there was nothing to report at that time.”

Although they do not have an indication of the suspicious person with a gun or the inflammatory posters, they are doing a lot of information sharing and gathering.

Strupp said she wants the campus to be aware of their surroundings and if they suspect someone might have a gun to provide the information immediately to public safety, even if they are not sure.

Strupp said it’s important for students, faculty and staff to make sure they have programmed Public Safety’s phone number into their phone (812-492-7777). She also said the information was not released earlier because officials could not verify if it was a firearm.

A spokeswoman for the Indianapolis Federal Bureau of Investigation Chris Bavender confirmed the agency is “aware of the incidents at the University of Southern Indiana and have been in contact with university officials.”

Dozens of other reports of hateful anti-semitic posters have been reported across the country.

Last week at Depauw University in Greencastle, Ind. six bias incidents were recorded in just one week. Following two days of student protests, DePauw University President Mark McCoy, issued a statement categorically condemning slurs, threats or intimidation. He said in part that threats “are never welcome on this campus. Our society has major challenges before us and we must do in all in our power to be certain that this campus, our home, is inclusive, welcoming, and safe.”

In February, at the University of Wyoming Laramie, posters promoting a white nationalist group were seen with slogans such as “Our Generation, Our Future, Our Last Chance,” over images of activists affiliated with the group known as Identity Evropa.

“This particular Identity Evropa has been all over campuses all over the country, putting these things up,” he said. “Certainly, the university denounces the message of this group. It’s awful, and it’s totally at odds with the university’s values and really the values of all reasonable people.”

The Southern Poverty Law Center would not confirm if a report regarding the university had been received at press time.

This story will be updated as more information is available.