‘We want to teach people how to play’ 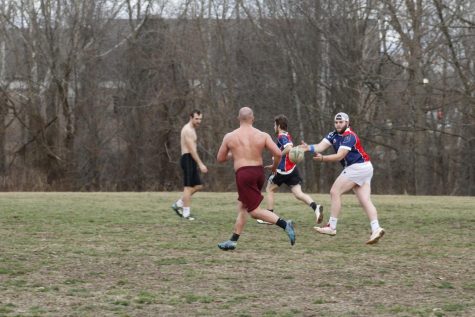 With spring upon us, the rugby team is ready to spring into action. Already, this first weekend after the break, the team is gearing up for their first match against Ball State.

Every team has a mission to accomplish. David F. Lepp, a senior computer science major as well as the captain and president of the University of Southern Indiana rugby team, was more than motivated to weigh in on the team’s goal.

“We typically play 15-on-15 but this season we are heading to the 7-on-7 tournament at Vanderbilt University. If we were to win, we would be open to participating in the College Rugby Championships, or CRC, as opposed to the National Small College Rugby Association, or NSCRA, that we are a part of now,” said Lepp. “So our goal is to get the win at that tournament.”

Lepp explained how 7-on-7 games are popular in the summer Olympics. The games are played on the same sized field as a 15-on-15 game but allow the field to be opened up more to the lesser number of players. The faster, more explosive players have a chance to show their true skills on the field in this setting.

A lot of people don’t get into the sport because they just aren’t familiar with it or they think it is too dangerous. The team is looking to encourage students to view the sport and become educated on what goes on during the games.

Also, because it is a full-contact sport, the players spend a great deal of time enforcing and practicing proper safety techniques. They make sure all players exercise all aspects of the sport in a safe and proper manner with open arms.

Rugby isn’t just for the guys, though.

For the ladies of campus, several women in the community have put together a team called “The Vandal’s Women’s Rugby Team.” The Vandals are not a part of the school’s club sports charter but the majority of the team is made up of girls from the university.

The Vandals and men’s team will sometimes get together on campus to practice and go over non-contact drills.

With being a new club, the Vandals are looking for new member to join the club as well.

The best way to get involved in Rugby would be to show up to any of the practices, Tues. and Thurs. from 4:30 to 6:30 at the rugby field on campus or to contact Lepp on the rugby page of the USI website.

“We love the support, we love student involvement, and we just want people to come out and give rugby a chance,” said Lepp.

So come out this season and check out what the Rugby Team has in store.