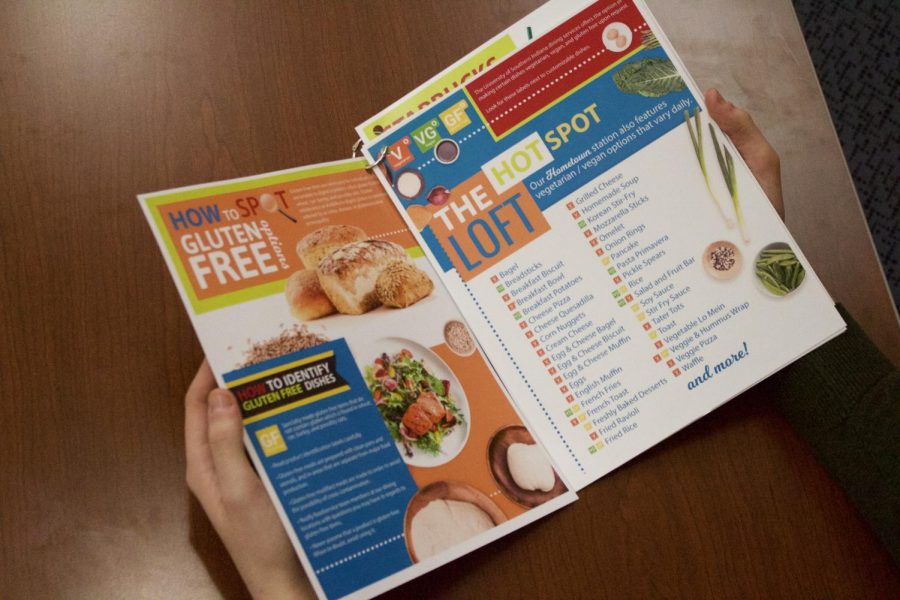 Dining services has created a new “Hot-Spot” menu that shows vegan, vegetarian and gluten-free options for all dining locations on campus. The guide can be found on the dining services website and at each of the locations.

For students who didn’t know about all the options dining services provides, Sodexo wanted to make those choices clear.

Dining Services launched a new ‘Hot-Spot’ menu at the end of January which lists gluten-free, vegetarian and vegan options.

The menu includes selections from every venue on campus.

Executive Chef Robert Fruit said they wanted to make sure their information was as up to date as possible before publishing the menu.

“We have a certain population of students that are on campus that either have to or choose to eat those particular dietary requirements or choices, so what we wanted to do is make it easier for them to be able to know what was available where,” he said. “This was a way for us to help raise awareness of just exactly how many options are out there.”

“This menu is going to continually be a work in process,” Fruit said. “There may be things that we are offering now that we brought in that are maybe a particular vegan or vegetarian option that just isn’t selling and if it’s not selling we may choose to stop carrying it.”

Lamar Patterson, director of dining services, said the menu will continuously be revised and they will look to add additional items over the summer.

“It’s the same question I have been hearing over the last 20 years, ‘what do you have to offer?’” he said. “We have a lot to offer, we just haven’t done a good job of advertising it.”

Patterson said they would like to do more research into the students’ dining preferences and manipulate the menu to tailor specifically to students on campus.

President of the vegetarian club Skylar Kemp said she thinks the guide will be helpful for vegans and vegetarians on campus but is upset they didn’t add any options.

“The times are changing and we need more options,” she said. “It’s a good start. I’m really happy they are taking us into consideration but I think they should look at it and be like, ‘hey maybe we need to offer more.’”

The sophomore psychology and philosophy major she feels like everyone could benefit from having healthier options on campus.

Kemp said she usually shops at Meier and Fresh Thyme instead of going to the C-store.

Fruit said they are limited in what they can offer for brands like Starbucks and Chick-Fil-A, but they are continually exploring new options and seeing what else is available.

He said that these dietary options are not a large component of their business and estimated that only around five percent of their customer base are vegan or vegetarian.

“It’s our job to try to do everything that we can to be the food service provider for every student on this campus,” he said. “If there are things that we can do that are a simple fix, why wouldn’t we want to do it?”

Fruit said some of the vegan items are more expensive. For example, vegan cheese is nearly two times more expensive than regular cheese.

“We do what we have to do to take care of the population we have on this campus,” he said. “The menus that I ran 30 years ago are not the kinds of foods that the kids today want to eat. Everybody’s culinary pallets change and we have to continually be changing to stay current with what is wanted by kids today.”

He said he wants more feedback from students so that they can better serve them.

“We are always available if someone has a particular allergy concern, they can contact any of the management team and they can get in with one of the chefs,” Fruit said. “We don’t want anybody coming to school and thinking that what they have available to eat is not a whole lot when it’s actually a lot more.”