What goes around comes around

Performance Center door to be replaced 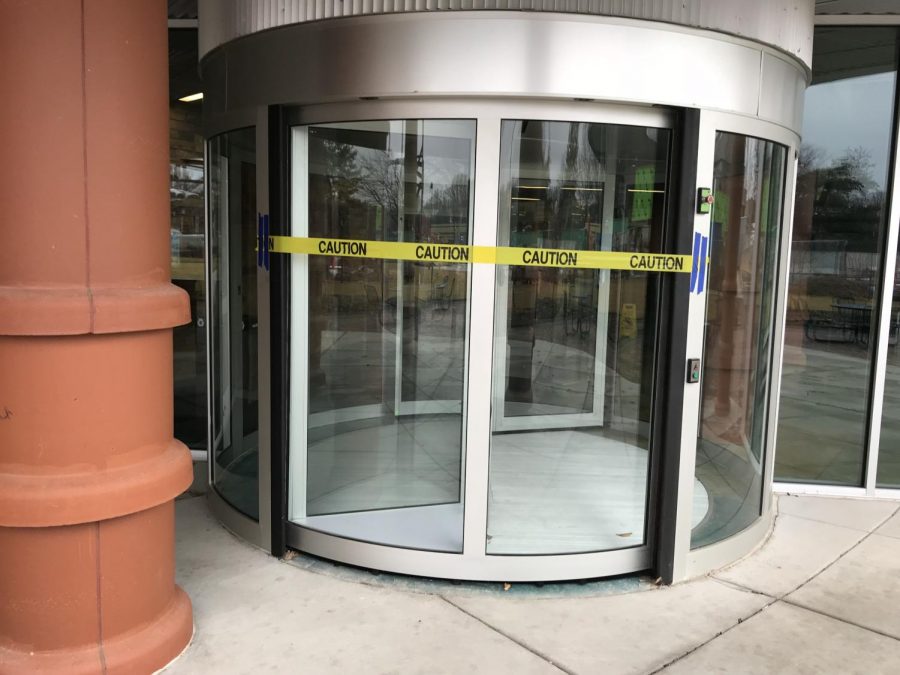 The revolving door in the Performance Center does not perform.

The university has no clear timeline as to when it will be fixed after remaining inoperable for over a month.

Construction Project Manager Gary Burgdorf said that revolving door has caused problems since the Performance Center was completed in 2015.

“Maintenance first called me and said its out of operation and what should we do,” Burgdorf said. “We looked around to see who could work around the door, and the company locally here that could work on the door is out of business.”

The university looked to a company as far as Louisville but “they didn’t want to deal with it.”

Burgdorf said the architectural team is putting together a plan to remove the revolving door.

“We have called one of the local suppliers for glass, hardware and doors,” he said. “We will take out that revolving door that nobody likes.”

Updated renderings indicate that two doors in the middle will replace the revolving door, with one additional door being added to already existing regular swinging door.

Holzman Moss Bottino Architecture, a company based in New York City, was responsible for construction of the door and Performance Center as a whole.

“The door was problematic from the very first day,” Burgdorf said. “The architect on that project was from New York, and, they were not well versed in midwest weather or rural settings.”

He said the original plans specked out for the door were not vetted properly.

“A cricket could shut the door off, a leaf blowing into the door could set it off,” he said. “There were times our maintenance guys would go there and sweep out a cricket.”

High-end features are abundant inside the Performance Center and Burgdorf said that the state of the art door also looked aesthetically pleasing.

“It’s a very sophisticated piece of equipment,” he said. “As you walk into the door it has two sections, three eyes at the bottom frame of the door that sense your feet and will not allow the door to run over your feet.”

Burgdorf stopped short of providing a monetary value because additional work around the door could vary.

“It seemed to me at the time it was installed it was a terribly expensive door,” he said. “The cost will depend on what it is we have to do and how much of that work needs completed, this depends on how much decorative concrete we have to replace or if we have to jackhammer some of that out.”

Some additional cosmetic ceiling work may also need to be completed. Burgdorf acknowledged the doors failures starting with complaints from the theatre department.

“The theatre people were not satisfied with it right off the bat,” he said. “They complained everytime it quit,  they want to put their best foot forward when they put their heart and soul into all this production time, they want people to walk into this theater and just be wowed from the time they step into the building, and here is this door that is just embarrassing all of us.”

At the time of construction, members of administration were receptive to the idea of having the revolving door.

“The people I work for, the administrators, they all thought it was a wonderful looking thing, but to have a door that doesn’t perform in the Performance Center, that just doesn’t work.”

Burgdorf said the upgraded doors will be much more pleasant.

“We want to come up with a plan that does not look like it was an afterthought,” Burgdorf said. “We want to implement this plan in the most expeditious way possible.”