Film urges women to ‘speak out’ 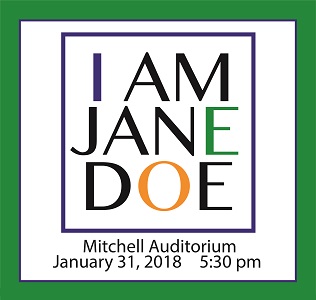 Since January is human trafficking awareness month, the university will be hosting a film screening of the film “I Am Jane Doe” to help bring awareness to sexual assault and trafficking.

“We wanted to have something to bring awareness to that with providing education for it,” said Carissa Prince. “We thought it would be a good representation of human trafficking awareness and to spark conversation.”

“I Am Jane Doe” is a documentary showing the journey of a group of mothers who are taking a stand after their middle-school daughters became victims of sex trafficking on an advertising website, pushing the message of “speak out, fight back.”

Featuring interviews from many involved with the cases, including senators, former writers and editors from the webpage, FBI agents, and lawyers, the 99 minutes film gives a new appearance to the social and legal issues that affect America, calling for legislative changes.

“I want students to know that it exists and what to do next,” said Carissa Prince, the graduate assistant for the Dean of Students Office.  “Really, to me, education is very important and to me is one of the first steps to helping solve a problem.  Just having them ask questions more about what it is and what they can do about it.”

The film will be shown in Mitchell Auditorium Jan. 31 followed by a discussion panel.

The Dean of Students Office, Sexual Assault & Gender Violence Prevention (SAGVP) Committee, Housing and Residence Life and Recreation, Fitness and Wellness Center are sponsoring the film and panel session as a way to help bring student awareness and spark conversation among students.

This federal crime is the trade of humans for the purpose of forced labor, sexual slavery or commercial sexual exploitation for the trafficker.

According to the film, annually 600,000 – 800,000 men, women and children are trafficked across international borders. Of these, 70% are women and 50% are children. Nearly two-thirds of children sold for sex in the United States are trafficked online, making it difficult to both track and properly charge websites.

The cases shown in the film against the website Backpage are stuck or lost in court due to judges claiming Backpage acted as an online publisher and is not responsible for third party posts.

The panel will focus on students gaining more knowledge on human trafficking, sexual assault and what the next steps are for prevention. Students are welcome to ask any questions they have about the film.

“I’m one of those people that don’t like to ask questions,” Prince said. “The Dean’s office is always open for students if they want to come by and ask questions.  If you’re uncomfortable with something or have questions we can steer the students in the right direction to get the answer.”

Prince said she is hoping students will gain more knowledge and awareness about human trafficking.

“I didn’t know what it was myself coming into college, and I think that’s something to focus on that students need to know not only what it is but what they can do.”

There are many organizations set up as resources to aid the end of human traffic and help those affected.

Groups such as Destiny Rescue, My Life My Choice, and many other organizations allow students and community members to help make a difference through donations of money, time or service, helping sponsor the end of this slavery.

For more information about these groups and others go to www.iamjanedoefilm.com.