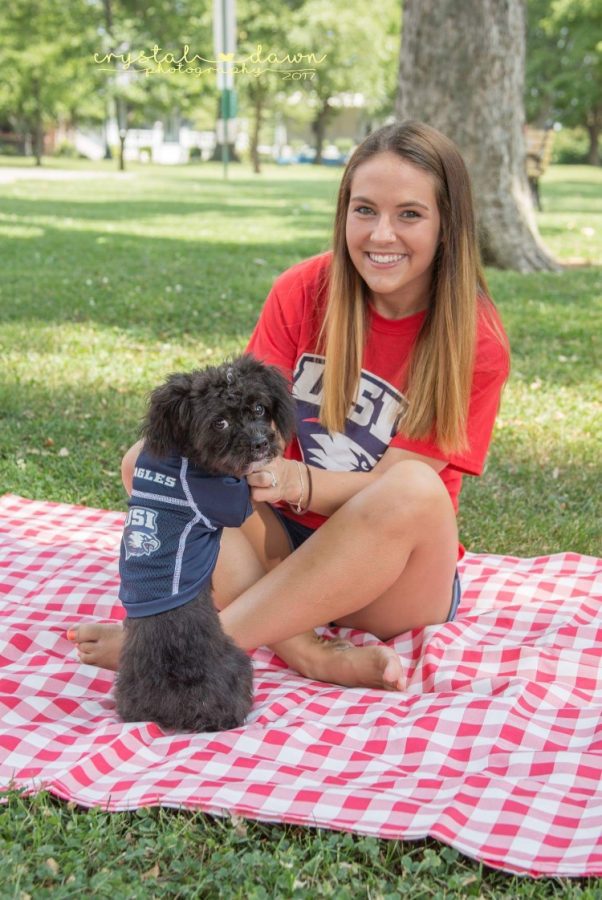 Mercades Axton sat in an oversized armchair with her legs pulled up under her. Axton slowly ran her fingers between Henley’s soft ears, all the way down his back to his tail. The Shorkie remained still but watchful as Axton spoke of her mother’s death.

The freshman nursing major’s muted television made light dance across her face, casting shadows across her body.

The news that wrecked her world five years ago tumbled from her lips, but there were no tears this time. Five years had given her plenty of time to cry, and now her eyes were dry.

“I didn’t know what was wrong with me. I was a straight-A student, and my grades started to plummet. Soon after, I quit cheerleading. At that point, I knew something was wrong. I had been cheering since I was four.”

Henley rested his head on his paws as he listened to Axton speak. As she spoke of developing signs of depression, anxiety, and bipolar disorder, Henley looked up at her face, seeming to understand what she was saying. Henley moved closer to Axton, squeezing himself tighter into the crook of her arm.

According to the Anxiety and Depression Association of America, 21.9 percent of students reported that within the last 12 months, anxiety had affected their academic performance, defined as receiving a lower grade on an exam or important project, receiving an incomplete, or dropping a course.

“It was a few months after my mom died and I just didn’t care about anything,” Axton said. “I just wanted to sit. All I wanted to do was lock myself in my room and lay in bed all day. I started going to therapy and actually moved schools to get away from where it happened because I didn’t want to have to deal with that.”

Axton began to see doctors and therapists, but as she was recommended prescriptions for each of her disorders, she was adamant about one thing: no medications.

“My mom was on so many different medications,” Axton said. “Her symptoms were just clashing together and they put her in a worse spot rather than a better one. And I feel like if it was not for the medication, she would not have committed suicide. My grandma is on sleeping pills and depression pills and she tried to commit suicide. Medication alters your state of mind.”

Axton’s therapist gave her another option: an emotional support animal. If the relatively new form of treatment did not work, Axton would have to start taking medication. A year later, Axton went through the certification process with Henley, the emotional support dog she has had for five years and has never needed medication a day in her life.

In 2010, the United States v. University of Nebraska at Kearney ruled in favor of the university student, determining emotional support animals would be allowed under the Fair Housing Act, categorizing campus housing as permanent housing for the first time.

An emotional support animal is a type of service animal that is recognized as a reasonable accommodation for a person with a disability. The assistant animal is not a pet, but an animal that works, provides assistance, or performs tasks for the benefit of a person with a disability, or provides emotional support that alleviates one or more identified symptoms or effects of a person’s disability.

“When I’m having an anxiety attack, just having him there to hold calms me down,” Axton said. “I get very bad road rage and I get anxious every time I drive. When he is in the car with me, it makes my anxiety less severe and it makes me not so flustered.”

Axton said whenever she is upset or has had a horrible day, just being able to come back to Henley makes it so much better.

When Olivia Johnson came to college as a freshman, she knew something was missing.

Being a long lover of animals, the sophomore Spanish major made a big adjustment when she had to leave her childhood dogs back home.

Johnson was diagnosed with depression and anxiety when she was in middle school and said it has been a life-long struggle learning to deal with her emotional disorders.

“I went to the humane society around six months ago,” Johnson said. “And I know it sounds cheesy to say, but Nala found me.”

“Having an emotional support animal doesn’t fix everything,” Johnson said. “but it helps.”

Johnson originally adopted Nala intending to certify her as an emotional support animal, but after speaking with a resident assistant on campus, Johnson realized Nala could also be a service animal.

Nala helps Johnson breathe by placing her paws on her chest when she is having a panic attack, which helps Johnson slow her breathing and calm down.

“I thought service animals were only for people with physical disabilities,” Johnson said. “But I found out a service animal, by definition, is an animal who performs a task you cannot do by yourself. I decided to train Nala myself.”

Johnson trains Nala by taking her loud places and having strangers pet her. Johnson also trains Nala not to chase after squirrels and not biting if a child were to run up and grab her.

When Johnson is having a panic attack, she places Nala’s paws on her chest. Johnson said Nala is slowly beginning to recognize when Johnson is in that state of mind.

“Nala is a lifelong companion,” Johnson said. “Just having her sleep in the same bed with me helps with my depression. Having Nala, people come to me all the time and open up about their own struggles, and this has helped me become more open about what I deal with.”

Black specializes in emotional support animal services for pet owners with the legitimate need to own and keep a support animal and has been quoted on the growing need for ESAs in the New York Times.

Black works to ensure that people with a genuine need get the prescription they need to keep their support animal with them throughout life in housing and travel situations.

Black said as a psychotherapist, she has treated many people who have been so hurt by others that they can only trust four-legged creatures.

“For these people, a dog or cat is worth everything to them,” Black said. “This is especially true for people who are depressed and live alone. I also have seen clients who have suffered from illnesses or trauma, Post Traumatic Stress Disorder, or anxiety who are extremely comforted by their pets. I have even been told that if not for their pets, they felt like they couldn’t even go on.”

Ronda Stone, USI disabilities resource manager, said her goal to make sure all students have the same opportunity for success.

“When a student says to me, ‘I can’t live here, I cannot be by myself, I can’t deal with, whatever, unless I have an animal,’ and if there is evidence of that, that they have had problems or challenges in the past. Then that student is eligible to request an emotional support animal,” Stone said.

For a USI student to have an emotional support animal approved, the student must follow a three-step process.

Evidence needs to come from a doctor or trained professional psychiatrist, verifying the student’s need for the animal.

“If I’m approving an animal it needs to be for something permanent because an animal is a living being,” Stone said. “And I’m not going to place it in a home and then say in six months you’ve got to leave because the student no longer needs you. I’m not going to do that. I came to that conclusion when I thought that through one time. For me, it has to be permanent.”

Reasons for an emotional support animal can be chronic depression, severe anxiety, and a variety of other disabilities that make daily life difficult.

“There is a diagnosis of anxiety,” Stone said. “But there is a higher bar for anxiety as a disability. And a disability is considered a substantial limitation for a daily life activity. A lot of people can have anxiety but it doesn’t reach that level, so it’s not actually a disability so therefore they wouldn’t qualify.”

According to the Anxiety and Depression Association of America, anxiety disorders are the most common mental illness in the U.S. A study conducted by Penn State in 2014 showed that anxiety had surpassed depression as the leading mental health issue specifically for college students.

“I think society is becoming more accepting of what people have always been going through,” Axton said. “Previously every place was like ‘no pets’ under any circumstances. But I feel like since people have come out more with their mental illnesses and how they affect their lives and then how the dogs or cats impact them, I feel like that has made society more open to that.”

Nearly one in six college students have been diagnosed or treated for anxiety in the last 12 months, according to the annual national survey by the American College Health Association.

Axton said each person needs to figure what treatment works best for them.