‘This is beyond us’ 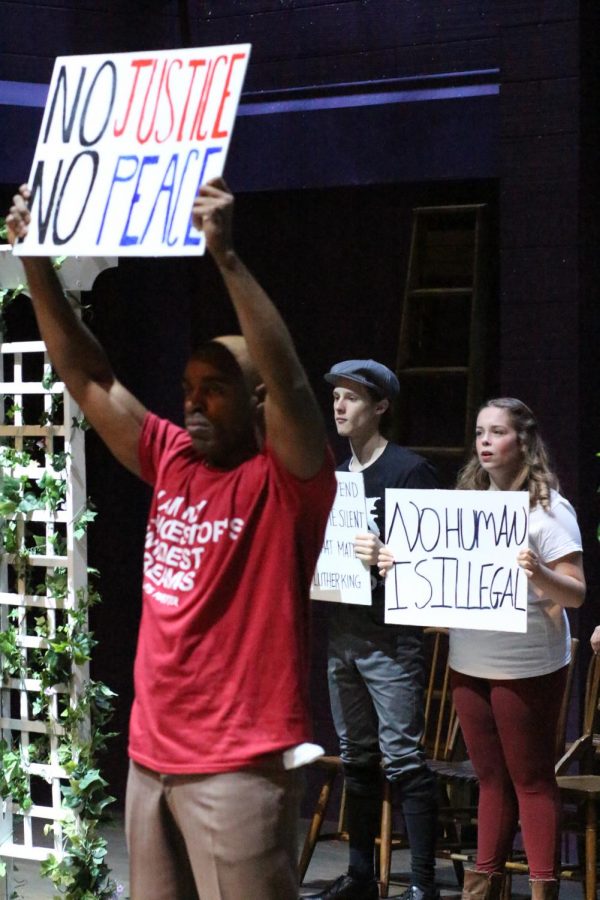 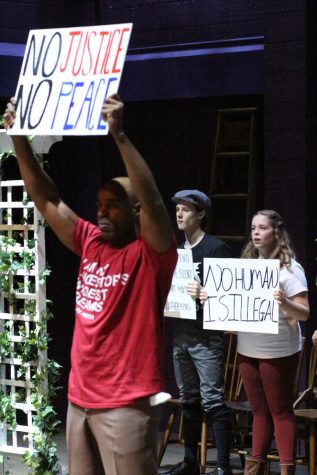 Ashleigh Dulik said so many people in society are asleep at the wheel.

“There is so much happening in the world today,” the senior theatre performance major said. “The times we live in now, the way people treat each other now, is not what we want, but hopefully through our performance, we can show everyone what we want for our world. We can show them the society we hope to be someday.”

Dulik plays Mrs. Gibbs in the university play “Our Town.” The play was originally written in 1938 by Thornton Wilder. The play is set in the early 1900s and reveals the everyday consistency of small-town life.

“Our Town” takes place in New Hampshire, following two families through 12 years of life and all the changes that it brings: daily life, budding romance, and even death.

Ron Himes, special guest director, decided to take the quaint play and make it something powerful.

“There is one scene where the whole cast is standing claiming our town,” Dulik said. “And we didn’t know until later, but it was a spin-off of what happened with the St. Louis police officers who mocked the protesters. The officers shouted, ‘Whose streets? Our streets!’ The moment you incorporate real issues into a work of art like this, you take that work to the next level.”

“All people need to do is come with an open mind,” Dulik said. This show is so much bigger than us. The issues we are tackling and the messages we are trying to send, this is beyond us.”

The play features interracial couples and a closeted gay man.

Dulik said that with everything going on, people are still not “woke.”

“Most of the references to social problems will go right over their heads,” Dulik said. “A lot of what we are saying, most will not be able to understand or relate. But some in the audience will weep because they do.”

Sam Garrison told his parents he was gay when he was 14.

“It made me sad thinking about how horribly alone he must have felt,” Garrison said. “Everyone in the town are always talking about his issues but not the issues that matter.I lived in a small town just like the one in “Our Town.” I felt isolated for a long time, and that I was the only one who understood what I was going through.”

Garrison said Simon has forced him to be open to what he is not normally comfortable with.

“For so much of the show I am vulnerably drunk,” Garrison said. “It’s not an easy thing to make that look genuine and real.”

Garrison said being an actor is like being an emotional athlete.

“The best thing about acting is that you can pull from your own stock of emotions,” Garrison said. “When you have someone who has been through what a character is going through, like me playing a gay man as a gay man, you get a much more authentic performance.”

Briana Weaver said her character is just a different version of herself.

The junior theatre performance major plays Emily, the 16-year-old girl who falls in love with George.

Emily dies in the third act, and it was difficult for Weaver to feel the emotion of dying without making it melodramatic or ingenuine.

“I had to think about who I would say goodbye to,” Weaver said. “I went home and watched a bunch of home videos. I watched my mom and grandmother talking to each other, my mom giving my sister a bath, and myself eating my first piece of candy. At that point, I knew I had found it.”

Weaver said when she finally found the genuine emotion she cried for 45 minutes.

“It was overwhelming,” Weaver said. “I thought about what would happen if my parents died or if I lost my dog Boomer. Saying goodbye to them was unimaginable. Even the little things in life like coffee, candles and freshly vacuumed carpet that we take for granted. All of that helped me form in my mind what I was saying goodbye to.”

“I think it’s necessary to point out social injustices,” Weaver said. “We don’t look at one another, and we constantly miss human interaction. Honestly, I think it’s more relevant today than it was even then.”