Freshmen fitting into the formula 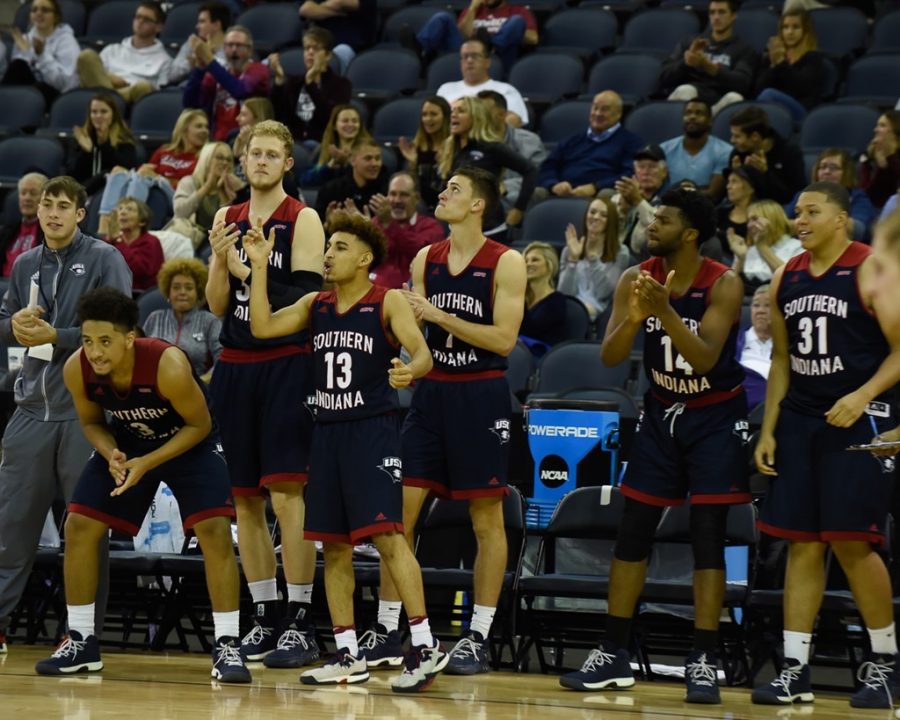 Freshmen Mateo Rivera (3) and Emmanuel Little (14) watch from the sidelines during the Small College Basketball Hall of Fame Classic at the Ford Center Nov. 3-4.

In the most recent regular season game, the USI men’s basketball team played, an 88-75 win against Kentucky Wesleyan Saturday to conclude the Small College Basketball Hall of Fame Classic at the Ford Center, Alex Stein had a rough night.

The junior shooting guard went 1-of-9 from the floor and needed the foul line to even grasp at double-digit scoring. Stein finished with 9 points and went 6-of-6 at the line.

But in a night where Stein wasn’t the most dominant player on the court, other players stepped up, including two freshmen Mateo “Cheesy” Rivera and Emmanuel Little.

Rivera shot a lights out 85.7 percent from the floor (6-of-7) and he finished tied for second on the team with 16 points. He also finished 3-of-3 from beyond the arc.

Little, who led the team in scoring with 17 points on 7-of-12 shooting, not only recorded his first-ever collegiate double-double in the regular season, he was also a foul magnet, finishing with eight free-throw attempts, a few of which came off of three-point play opportunities.

For a team that had seven players finish with double digits minutes having two players to bring a spark off the bench and impact the game helps, and the other players have noticed.

“They came in the game and set the tone as soon as they touched the floor,” senior point guard Marcellous Washington said. “It takes the relief (sic) off of me and Alex. It makes the other team have to adjust to guard two more people that are just as good, if not better at the time than us.”

The game against KWC was Little and Rivera’s second-ever regular season college game.

Against Augustana in the season opener Friday night, the two, as expected, experienced some growing pains on the court.

Little finished his first game with 5 points by going 2-of-6 from the floor and made no trips to the line.

Rivera shot 20 percent from the floor (1-of-5), finishing with 2 points and went 0-of-4 from the three-point line.

“(We had to) get the hang of the new pace and how fast the game is,” Rivera said. “… We got the first-game jitters out. Just having my team behind me, pushing me, made it easy.”

As much of a turnaround as the two faced in the KWC game, they’re still freshmen, and as USI men’s coach Rodney Watson said, they’re still making progress.

“I think they got past chapter two,” Watson said. “I always say we have to get past chapter one. That’s just getting in position on both ends. They got deep into chapter three (against KWC).”

But perhaps what matters the most is, if one or two of the starters aren’t playing particularly well on a given night, there are two guys, even if they are young, that can come in off the bench and soak up valuable minutes.

“I think our team is so deep that anybody can come in and get a bucket at any time,” Rivera said. “… It’s a pretty good feeling.”