A celebration of life and death 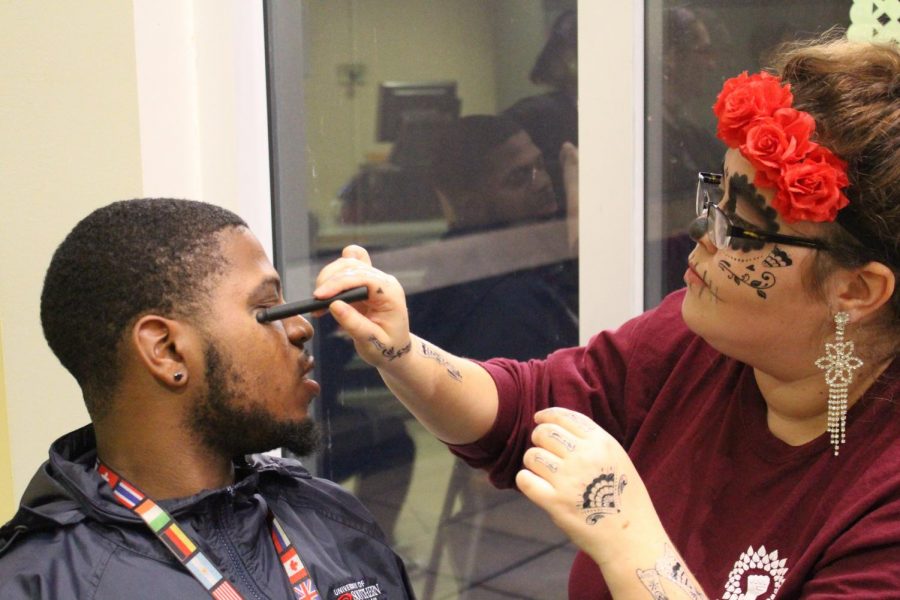 Theresa Holcomb, junior exercise science major, paints faces as a member of the art club for the Day of the Dead celebration Wednesday evening.

Sarah RogersTheresa Holcomb, junior exercise science major, paints faces as a member of the art club for the Day of the Dead celebration Wednesday evening.

Students shielded their candles trying to keep them lit as the group formed a loose circle.  Even with the wind, the view was still moving.

“We made a circle of light to symbolize going from the mortal world to the immortal world where you can visit your dead loved ones,” Joseph Conner said. “The wind was not cooperative though.”

The sophomore psychology major was one of many students who participated in the celebration of Dia de Los Muertos, or Day of the Dead, Wednesday evening.

The Liberal Arts’ lobby was decorated with the festive colors, sugar skulls and a table displaying each of the elements needed for the ofrenda, an offering for the spirits of the dead

Students were able to enjoy many different activities during the night including crafting masks, a heritage photo booth, and dance lessons. Students also joined together to light candles in honor of the dead.

“You get to learn about new culture, which personally, I love learning about,” Conner said.  “I feel like that’s something people want to get out and experience.”

While the Spanish club took most of the lead planning the event,  the International Club, Black Student Union, Hispanic Student Union, and Art club all joined together to help make the night possible.

“It teaches us to go and learn more about the clubs we have the opportunity to join,” Conner said.

Manuel Apodaca Valdez praised the many organizations that had come together to make this day possible.

“These organizations are mainly composed of minority students. So, one of the goals of this event is to promote more diversity on campus,” the Associate professor of Spanish said. “It’s something amazing, something incredible.  They spread the voice on campus and more student organizations participate.”

Valdez gave a small speech during the night, discussing the La Catrina Skull, a 19th-century icon that has grown into a symbol of the day and a Mexican identity.

“Today,  it’s very important to understand other cultures,” Valdez said.  “It is a celebration of life and death at the same time.”  Valdez said the goal was to prompt more diversity and understanding of each other’s cultures, ending his speech saying, “We all die and in the end, we are equal.”

Art club was a new supporter of the event and its members were able to use their abilities in a creative way. The group participated in the skeleton face paint, a common tradition for the celebration.

“We’re a very big club already, but this does help with awareness for those who are not art majors,” said the junior exercise science major.  “I’m really happy that people are interested in getting their face painted.”

Holcomb said the particular skulls being painted were called sugar skulls.  The group had to use the cultural term in order to find the correct outlines to follow.

“We had to be very specific when we googled it because there is a lot out there,” Holcomb said.

Holcomb described the skulls as happy and cheerful, often presented as dancing or playing music, not the traditional scary skulls.

Jenny Wagner said the day is about remembering loved ones.

The English and Spanish education major went on to say that while the day is used to celebrate the dead, it is also a celebration of life and other people’s beliefs.

“I feel like there is a  desire to embrace diversity and to let people know about what this holiday is and to appreciate it more,” Wagner said.

Katie Biggs said the day is a light to help students experience different holidays and to open their minds to the many traditions the world has to offer.

“It broadens understanding not just of diversity, but in terms of there is more out there,” the senior psychology and creative writing major said.  “I think it allowed people to see the connectivity.  It’s important to recognize that we come from somewhere and everyone, no matter who you are, you have a root somewhere.”