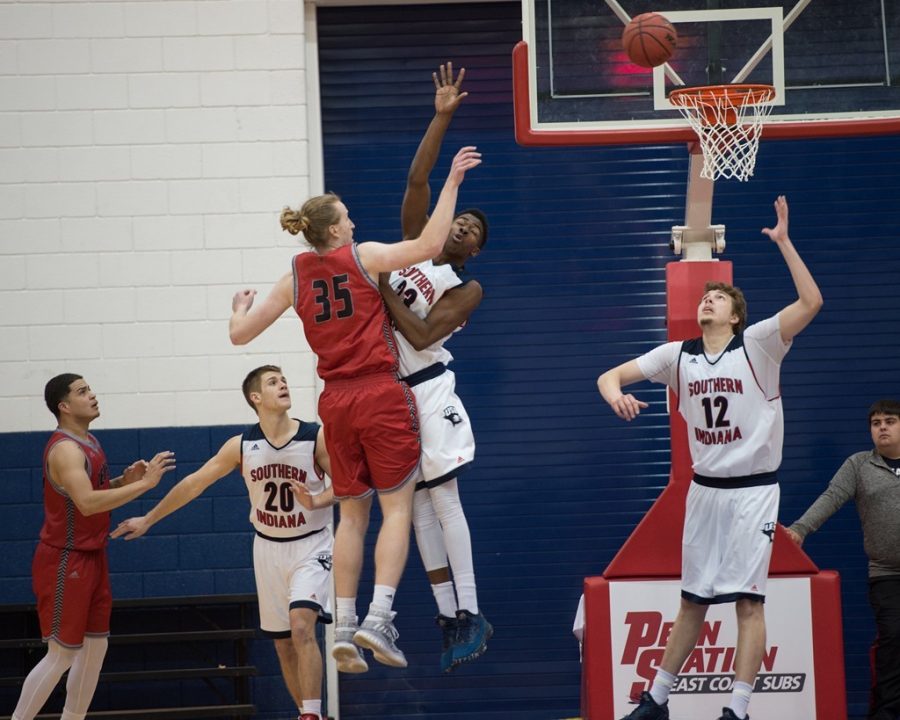 DayJar Dickson (23) goes up for a block as Julius Rajala (12) waits to collect the rebound against William Jewell Jan. 5, 2017.

One of the advantages the University of Southern Indiana men’s basketball team has over other Division II teams is the size of its forwards.

Last seasons starters, Julius Rajala and DayJar “Day Day” Dickson are both 6-foot-9. They’re two of the three tallest players on the team.

The two haven’t been at USI for very long, just one season.

Rajala and Dickson each started out in the Division I ranks before a lack of playing time made them want to look for another team.

But somehow, Rajala, a Helsinki native, and Dickson, who’s originally from Washington D.C., both ended up on the USI men’s basketball team last season and they each started over 20 games.

Now the two forwards are in their final season of eligibility with the Scream Eagles, and this year the expectations are higher.

Growing pains were expected last season since they were both joining a new team with a new system in a new city, but they’ve each had a year to learn under this coaching staff and even though USI runs a three-guard set, their size will be instrumental in any success USI wants to have this year.

“We hope they can get us what we call ‘power baskets,’” USI men’s coach Rodney Watson said. “These are baskets in an 8-foot arc area, where there’s a lot of contact and physicality, but with our length and strength, we can get shots.”

Typically, this would suit big men just fine – stand near the basket, get buckets. Last year it worked for the USI big men as well. Rajala and Dickson spent a lot of time in the paint collecting east buckets, but this year is different.

They each want to add another dimension to the offense in their last season by becoming big men that call get the so-called “power baskets” and that can shoot.

Coming into this season, they each have their defined roles, but they want to shake that.

“One guy has a high skill level that we’re still waiting to see his best days in Julius and DayJar can guard a guard and he can guard a forward,” Watson said. “One guy is more of a tough power guy inside, and the other is more of a finesse guy.”

That doesn’t mean fans will see both of the USI forwards spotting up from behind the arc, but they’re still working on increasing their range to stretch opposing defenses.

For Rajala, who was a double-figure scorer last season (10.5 points and 4.3 rebounds per game), he’s going back to his roots.

Before he came to America, he played like a stretch four, a power forward with the ability to hit a high percentage of catch-and-shoot shots from longer ranges, and if it were up to him, once he establishes his range from deep, he’d like to play like that again this season.

“When I came to college, I was kind of slotted into the center role and that’s where I’ve been ever since,” Rajala said. “I can shoot threes, but I’m not consistent enough yet to shoot them in the games. That’s something I’ve been trying to work on.”

Dickson, on the other hand, is used to doing the dirty work on the court. He averaged 4.8 points and 4.6 rebounds per game on last years 25 game winning squad. That’s why this year he’s out to surprise everyone.

“My whole career, I always took on the Dennis Rodman like role,” he said. “This year, I’m going to put the ball in the basket. I’m trying to also take on that scoring type of role.”

That’s why Dickson is working on his mid-range jumper. Up until now, he’s played close to the basket, but if he’s able to add some range, it will make it hard for opposing defenses to guard him, or at least that’s what he’s hoping happens.

Even though both Rajala and Dickson are working to improve their range and have lofty expectations for their own development this season, whether or not they’ll be able to utilize what they’ve worked on in the offseason in games is yet to be determined.

“I would like to think that the ball is going to find the shots rather the shooter finding the shots,” Watson said. “We’re hoping that we can continue to move the ball in the air and with a lot of cutting options. I hope we’ll see a lot more cutting out of this team than standing faceup when the defense over helps.”