Reunited on the West Side 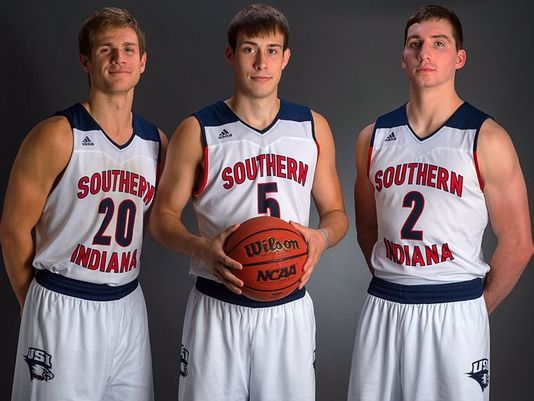 Alex Stein (20, Nate Hansen (5) and Jacob Norman (2) all graduated from Reitz in 2015. After two years apart, they're all three playing on the same team this year for USI.

Five miles and a 13-minute drive are all that separate the campuses of Reitz High School and the University of Southern Indiana.

At Reitz, while seniors, they played on an up-tempo team that beatdown opponents by an average of 31 points per game and for the season averaged an eye-popping 92 points per game.

That Panthers team was a basket away from winning the Class 4A state championship.

After the 91-90 overtime loss to Homestead in the title game, Stein and Norman continued playing basketball in Evansville at USI, but Hansen chose to play elsewhere. He decided on NJCAA school Vincennes.

But since Vincennes is a two year school, it was only a matter of time before Hansen would need to look for another team to play for. At Vincennes, Hansen was coming off a strong sophomore outing. The Evansville native averaged 15.7 points, 5.7 rebounds and 3.7 assists per game.

With numbers like that, and Vincennes going 32-3 and advancing to the NJCAA Division I quarterfinals, there was bound to be some attention thrown Hansen’s way.

He received offers from two Division I schools, Eastern Illinois and Texas State and from Division II Kentucky Wesleyan and USI.

Ultimately, Hansen opted to head home to Evansville, and now that he’s back in town after two years at Vincennes, he’ll be suiting up for the Screaming Eagles this season. The three will be playing on the same team together for the first time since March 28, 2015.

For Stein and Norman, they wanted Hansen on the team because they know what kind of player he is.

“I wanted Nate because I think he’s a competitor,” Norman said. “It’s so difficult to put a full team of guys together that just want to win more than anything, and Nate is no question one of those guys.”

Added Stein: “Our chemistry on the court is where it was in high school. We all push each other and try to compete against each other. I think that’s a big reason why we see improvement because we’re working together and our hard work is paying off.”

These guys are best friends after all. They’re even sharing the same apartment this semester.

That’s one of the reasons Hansen said he decided to join the Screaming Eagles squad this year instead of playing in Division I.

“I knew what I was getting when I committed,” Hansen said. “I knew I was getting two guys that I already played with and they battle and they fight every game and every practice. If you go into (the PAC) any time of the day, you’ll see at least one of those guys working either in the weight room or in the gym.

Now that the trio is back on the West Side and suiting up for the same team again, the biggest question surrounding the addition of Hansen to the Screaming Eagles is can they replicate the success they had at Reitz in college?

Panthers coach Michael Adams said he let his team play. He didn’t want to get in their way and it worked.

Now, that approach isn’t unheard of for Rodney Watson, but fans shouldn’t expect the USI system to mimic that of the Reitz Panthers from three years ago.

“We were all guards at Reitz, we could all handle the ball, but here we’re going to play two bigs,” Hansen said. “Our coaching staff knows what we’re doing, they’ve won many games and we’re going to listen to them.”

With the regular season two weeks away, the addition of Hansen making the Stein-Norman duo into a trio adds a lot of intrigue to this season.

USI now has three guys who have played deep into March for a school in the city of Evansville and for a team that hasn’t advanced out of the first round of the NCAA Division II tournament in four of its last five appearances, that could be the difference maker, but that’s months away.

For right now, the players are focusing on the start of this season.

“I’m really excited to see where our team goes this year,” Stein said. “Our team as a whole is all locked in on the same goal right now. We’re playing for each other and not just for a basket or to go score. We’re more team-oriented.”