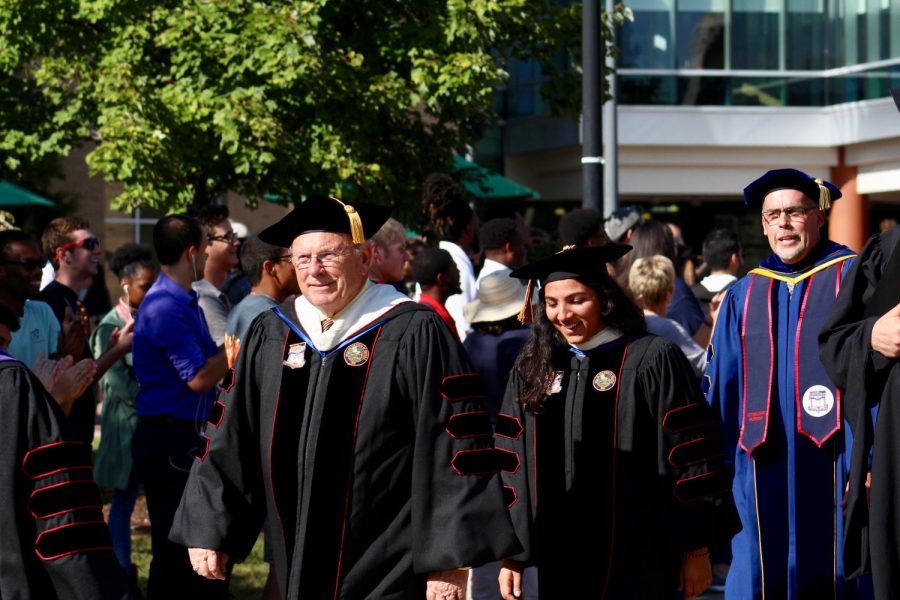 Faculty walk around the quad as students clap and cheer for thier professors during Faculty Convocation Friday afternoon. After walking around campus, faculty made thier way to Carter Hall to hear form the keynote speaker provost Ron Rochon.

Quality teaching is at a premium and the university wanted to recognize that.

All faculty were invited to attend the university’s first-ever faculty convocation. They began by marching around the Quad led by drummers and bagpipers from the Hadi Shriners before entering Carter Hall to be recognized for their accomplishments.

“Our faculty is amazing here, and for the first year, it was great,” Student Government President Katelyn Bueltel said. “I loved having the students out on the Quad recognizing faculty and I think it’s right to have this intentional recognition for all they do.”

Bueltel said the faculty are welcoming and engaging, and she believes the university prioritizes that when hiring faculty.

University President Linda Bennett opened the ceremony, saying the event was something the university has been planning on for a number of years.

Bennett said the faculty’s work not only in the classroom but also in the community is what makes them special.

“I think what you have found is that in doing that you earn a great sense of satisfaction,” she said. “I think it’s also important for the institution to also recognize that you do those things.”

Provost Ron Rochon gave the keynote address focusing primarily on the civility of students and how faculty are important in nurturing it.

“I believe it is our responsibility to keep students safe by preparing them for civility,” he said. “To impress upon them the power of clear thinking, that by evidence will equip them with the capacity to effectively communicate their ideas.”

Rochon said it is important for faculty to model for students the power of listening and hearing the ideas of others.

“Teaching is a tough job, a tall yet necessary essentially order. Teaching may be more important today to the health and well-being of our nation than it ever has been.”

He said every teaching act contributes to a student’s ability to carve out a dignified life by having respect for others no matter their differences.

“With social media, a news cycle that never sleeps, video cameras everywhere, a growing threat of danger and disruption in classrooms and a growing distrust of leadership across all factors, it is clear to me that how and what you teach matters,” Rochon said.

Over 30 faculty were recognized for achievements in promotions to professor and associate professor, tenure, doctoral and terminal degree completion, 25 years of service at the institution and emeriti honors.

“I am really humbled,” Zehr said. “There are many of my fellow colleagues that are equally if not more deserving and especially when it comes from your fellow faculty, it makes it very meaningful.”

Zehr has taught at the university since 1994. He is being honored for his research, service and teaching in the fields of sociology and science and technology studies.

He is involved in many national and international professional, even leaving the university for two years between 2007-2009 to work at the National Science Foundation.

“When you start at a university, you are charged with your own classes, but at the same time, there are senior colleagues who give you advice and it’s not just patting you on the back, it’s also critical advice from time to time,” Zehr said. “Over the years when you get older you try to do the same for younger faculty. It’s very important to have that community in place.”