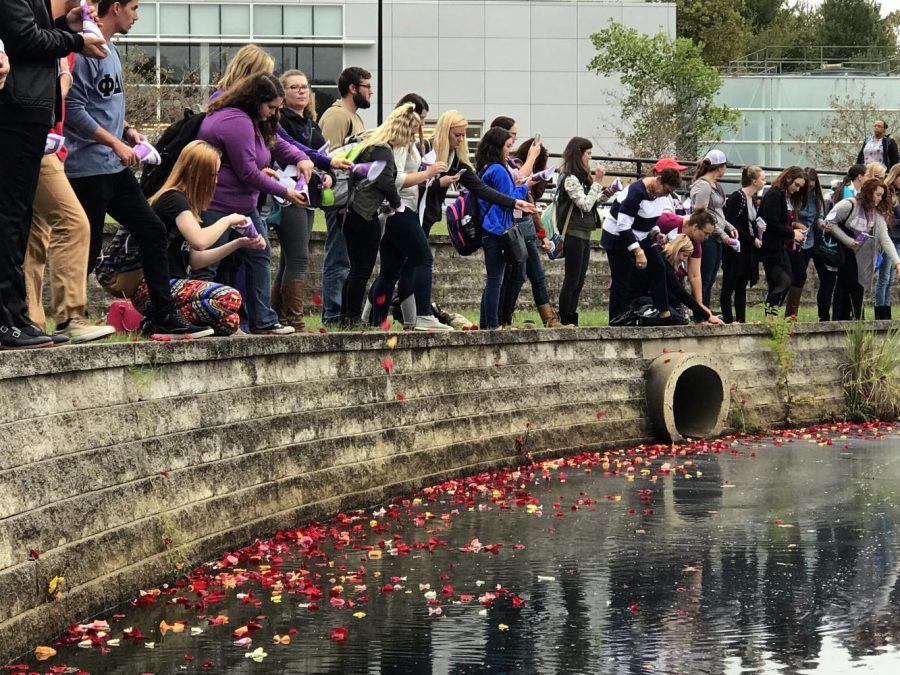 Students and guests release rose petals into Reflection Lake during the Flowers on the Lake event at the University Thursday evening. The event was held to spread awareness for victims of domestic abuse within the community.

When Randi Bass was six, her mother was married to a man who domestically abused her.

She was constantly trying to leave him. When Bass’ mother finally left, that only led to grief. The man would speak of harming and even killing her entire family.

There was no bluffing in his words. Bass, her sister, and her brother were their mother’s everything. She had no choice but to return every single time.

Bass’ story was just one of the many at Flowers on the Lake, an event to honor survivors of domestic violence. The community outside of campus as well as on campus both hold events to bring awareness about and heal from domestic abuse.

There was really no way out, Bass said. The man would tell her that even if he left her, he would still do the deed. No matter what way you cut it, there was going to be blood, he said.

At one point, Bass said she believed the truth had finally come out. Everything that he was doing to them had come to light, giving her mother a final straw moment to make her escape.

On February 9, 1990, Bass’ mother got into her vehicle and started backing out of the driveway.

The slug of a twelve gauge shotgun blasted through the glass of the driver side window and made contact with her, entering her body and brushing her heart. She was left there as the man went back inside to reflect on what he had just done.

The neighbor, an EMT, sprinted into action and pulled her out of the car and called the paramedics while attempting to stop the bleeding. The cops came as well, arresting the man on the spot.

He admitted to everything.

Bass’ mother lived for another two and a half hours in the hospital, where she then passed.

Bass’ words weighed heavy in the crisp autumn breeze, now 27 years after the trauma that changed her life.

“Not a day goes by that we don’t remember her. So any chance we get to come out and honor her memory instead of focusing on her death, that’s what we do,” Bass said, sincerity burning in her eyes.

Bass feels that in her mother’s death, she and her siblings were able to live. A harsh yet true silver lining. Their mother may have been silenced those years ago but her voice still rings on through the tellings of her story by her children.

“If it helps one person get out, then it is worth it,” Bass said.

Bass and her family posed for a photo in front of Reflection Lake holding a framed picture of her mother. They weren’t the only ones. Many students and families from our local community who have been affected by domestic abuse came to the event to tell and hear the stories of others, and ultimately spread awareness.

Bass ended with words of healing.

“The pain never goes away but anytime we get a chance to honor her memory versus acknowledging the death it is very healing to us,” Bass said. “Anytime we get these chances, we take that power away from that man and we give it back to her.”