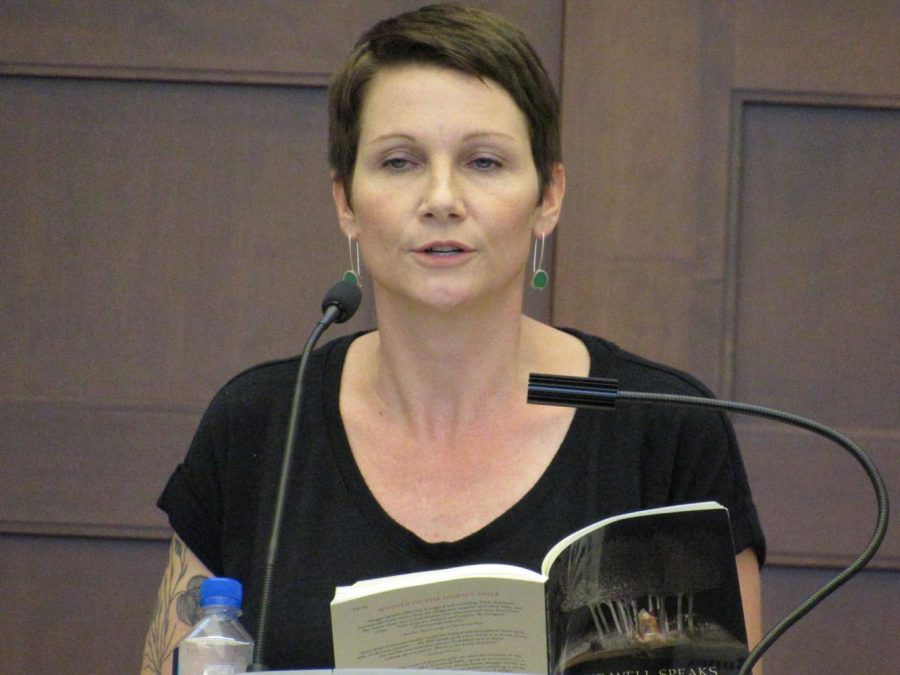 Maggie Smith, author of "Good Bones," "The Well Speaks of Its Own Poison" and "Lamp of the Body," read her poem "Rain, New Year's Eve" Thursday afternoon in the Griffin Center. Smith came to the university with poet, Matthew Guenette as a part of the Southern Indiana Reading Series. Smith is the author of three prizewinning chapbooks and had her poem "Good Bones" translated into nearly a dozen languages.

Renowned poets Matthew Guenette and Maggie Smith held a public reading to a packed house Oct. 12 in the Griffin Center.

Both poets have been awarded dozens of nationally acclaimed poetry prizes. Guenette won an American Poetry Journal Book Prize in 2008.

In 2016, Maggie Smith was internationally recognized for her poem “Good Bones.” It has since been translated into nearly a dozen languages, in what Public Radio International dubbed it’s “official poem of 2016.”

“Wow it is a big room,” Guenette said. “I’ll just thank all of you for taking the time to be here. This is such a thrill for me, I never take this opportunity for granted.”

The audience was amused with Guenette, often sharing laughs following his remarks.

Evansville resident Justin Hnatow was among dozens of locals in attendance.

“This is a great cultural event here in Evansville,” Hnatow said. “I have not been to a poetry reading here yet.”

Smith was greeted with overwhelming support as she appeared before the audience.

“Thank you all so much,” Smith said. “We are going to start with one of my favorites, ‘The Well Speaks of its Own Poison.”

Smith’s poem captivates dark forests of a fairytale to a world where kids name the neighborhood cul-de-sacs.

Smith now has a collection titled, ‘Good Bones’ based on her acclaimed poem, which is described as both hopeful, while revealing the darkness in the world.

The university’s reading series will continue in next semester with poets Kaveh Akbar and Ruth Awad but no dates have been decided yet.