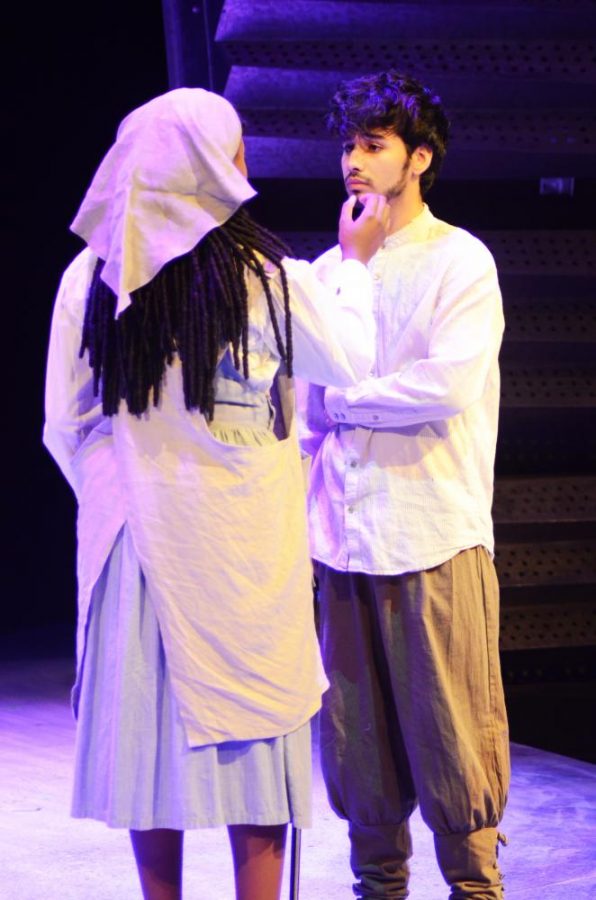 Jason Merslich said “Anon(ymous)” will help give people an open mind if they are willing to listen.

The sophomore theatre major is the main character for the university’s fall play. Merslich, playing Anon, portrays a refugee coming to America in hopes of finding his mother and identity, while still trying to maintain his culture.

The Odyssey inspired play is set in modern-day America, and Merslich represents the millions of refugees America has seen cross the border.

“Most organizations don’t talk about issues that are happening right now,” Merslich said. “This is a beautiful way to address those issues. The play will be pretty, but it will also make people think about what we are saying.”

Merslich said it wasn’t easy trying to put himself in the shoes of a refugee.

“I’m from Florida,” Merslich said. “I don’t know what it is like to flee from my home country to the United States. What I might consider unimaginable struggles, these refugees accept as their everyday life. They aren’t dramatic or self-pitying about it, they just go on with their life. I think that was the hardest part of the role, understanding how to portray Anon’s trials without looking like I was consumed by them.”

Merslich said he is able to use some of the prejudice he has experienced to understand his character better.

“I’m Colombian,” Merslich said. “I’ve dealt with certain issues based on looking different. I was able to take those small different moments and put that into the perspective of Anon. It made understanding what my character was going through easier.”

Merslich said the show has changed him.

“I knew refugees had a hard time before,” Merslich said. “But after going through this experience if I ever come across someone who is from another country I want to help them in any way I can. Just little things like how fast I am talking can be so hard for someone who has just come to America. I had never even thought of that before, but I am so aware of it now.”

Merslich said shows can be exhausting.

“I am in every scene,” Merslich said. “I have to be at every single practice from 5 p.m. until 11 p.m. every night. It’s time-consuming, it takes energy, but it’s my passion. I can come into rehearsal completely sleep deprived and I still have a great time.”

Jada Hampton said the production plays off the concept of refugees becoming anonymous when they come to America.

“Refugees come to America and they lose touch with their culture. They lose their heritage and we force them to assimilate into our society,” Hampton said. “Diversity is beautiful, but when immigrants and refugees are Americanized before we ever get to interact with them, how can we appreciate that beauty?”

“It was hard at first to know how to portray Naja,” Hampton said. “I didn’t want to let her fall under the stereotypes of goddesses. Naja is more of a mother figure to Anon, and I wanted to understand that kind of motherly love.”

Members of the International Club met with members of the cast to allow students to understand what the life of a real refugee looks like. Hampton said she asked who the Naja in their life was.

“I wanted to know who in their life had been that kind of mother and mentor figure,” Hampton said. “Most of them said (Heidi Gregori-Gahan). They told me how she had picked them up, let them live with her, and let them cry on her shoulder. I transferred the love she must feel for those students into the love I have for Anon.”

Hampton said the show seeks to address the issue of the cultural melting pot.

“When you melt things together those things become one and they lose their individuality,” Hampton said. “Assimilation can sometimes be inhumane; you are taking away these individuals culture, religion and story, and you are forcing them to become one thing. What is different is so often seen as vile and bad, and we will never truly become diverse until that changes.”

Hampton said she hopes the play will help students redefine the word refugee.

“Each character is telling a story,” Hampton said. “Each character has their own personal struggles and journey and even if you haven’t gone through what they have you can empathize. We hope students are able to find something in themselves that can relate to what these characters are going through.”