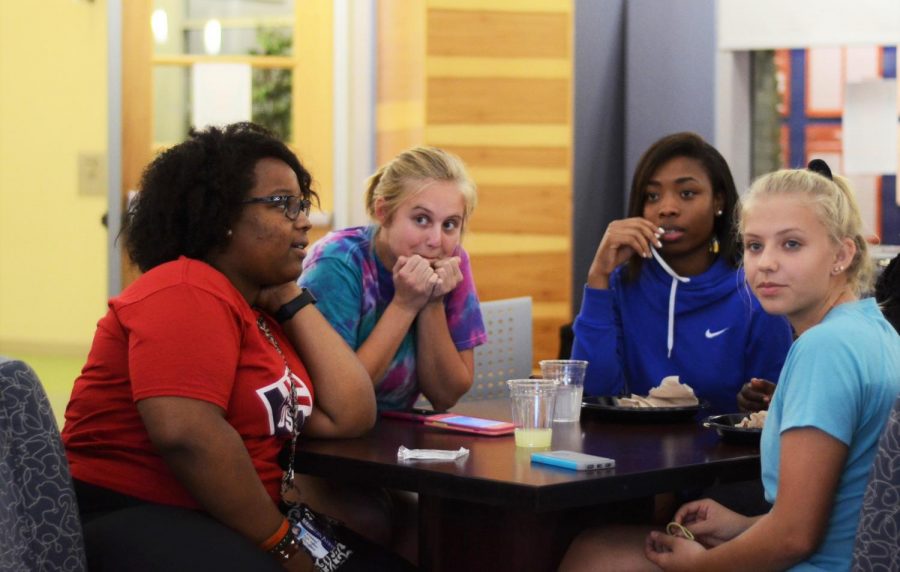 Lexie Fifer and Kylee Jackson sat at their team’s table awaiting the final score, hopeful for a victory.

The girls and their trivia team erupted into cheers as the scores were revealed. The team correctly answered 66 out of 100 questions, placing them in first place.

Questions were based off of university trivia, random facts, politics, sports and movies.

Fifer and Jackson were just two of over 30 students who attended Trivia Night Thursday evening, hosted by the Black Student Union and the Graduate Studies Programs.

“I helped make some of the trivia questions so I’m excited to see what people think the correct answers are,” Fifer said. “I’ll definitely be here for future programs.”

Fifer said she was grateful for the privilege of winning with her team.

“I was glad because my team was really into it,” the freshman chemistry major said. “We’d all just start guessing. If someone felt like they knew the answer then they threw it out there.”

Jackson, a freshman sonography major, said she heard about Trivia Night through the Black Student Union, but she also looked forward to learning more about the graduate studies.

Jackson said the night went well and she felt everyone had a good time.

“It was pretty amazing,” Jackson said. “It was a little challenging. I was really good at the movie category and the development of movies over time.”

Lindsey Gibson was pleased with the outcome of the evening.

“I think it went really well,” the graduate marketing and recruitment supervisor said. “We had a good turnout and students were really engaged with the questions. We are definitely pleased.”

“It’s definitely a good way to meet people.  Also learn some information about the organizations that (students) might not have availability to learn about just whenever,” Gibson said.

Mayola Rowser, director of graduate studies, said events like Trivia Night are not only to entertain students but to also get them involved with the groups on campus.

“Not only is it to have fun, but it is also an opportunity to network with other students, to get to know the graduate studies and to meet some graduate faculty members,” Rowser said.

Students were able to ask questions about the 14 graduate studies programs offered at university and learn more about where it could fit into their future.

“Generally, we ask students about their undergraduate major and what their career goals are and then we talk about the programs that align nicely with their current majors and career goals,” Rowser said.  “A lot of the reasons students choose our graduate programs are because of the reputation of our programs.”

Rowser said that partnering with other groups such as Black Student Union helps to reach a broader network of students.

“One of our strategic goals was to build relationships and collaborations with students across campus,” Rowser said.  “We wanted to reach out to special interest groups. This is really all about building relationships.”

Alexa Humphrey said the Black Student Union is an outlet for voices to be heard.

“As African American students we are seen as a minority and we have our opinions,” Humphrey said. “…We want to have that platform to (share our voices) in a very respectful manner as well as just collaborate with other organizations and make sure that we are not suppressed.”

As the president of the Black Student Union, Humphrey tries to plan events to give students the opportunity to utilize the resources the union and other organizations can provide.

The senior elementary education major said the Black Student Union is a place open to all students to help express their opinions.

The Black Student Union has many events going on campus, especially with the upcoming holidays of Thanksgiving and Christmas. Humphrey said while helping out in the community is a big role of Black Student Union, the group also hosts many discussions together.

“We want to take the opportunity in our meetings to use (our voices) and bring special speakers and use them here on campus,” Humphrey said.