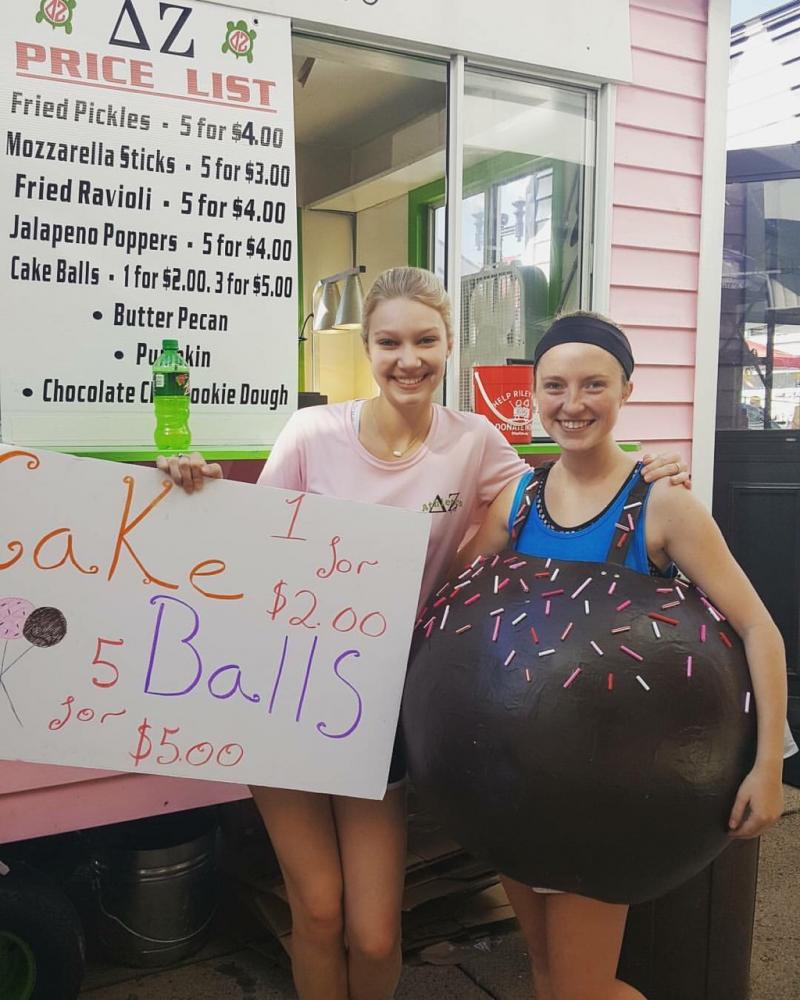 Members of Delta Zeta stand in front of their booth, the only pink painted booth at Fall Fest. The university Greek Life are just a few of the organizations that participate in the popular Evansville event.

During Fall Fest, Nathan Popp skips all his classes.

The junior economics major is the chairman for Phi Delta Theta’s Fall Festival booth and said, being the chairman, he is pretty much forced to miss school during that week.

The West Side Nut Club will be hosting the 96th annual Fall Festival from Oct. 2 through Oct. 7. The festival stretches across Franklin Street, spanning approximately a quarter of a mile.

Hundreds of booths decorate the streets, announcing the arrival of fall.

University Greek Life makes up just a few of the organizations that take part in the popular Evansville event.

“I am responsible for ordering the food, setting up our booth, tearing it down, scheduling when all the guys will be working, setting the prices for our food, deciding what our menu will look like, and making sure we are following all of Nut Club’s rules and standards,” Popp said. “It’s a lot for a college student to do alone.”

Popp became the chairman during his sophomore year and said it was stressful not knowing what to expect.

“I was just kind of blindly thrown into the position,” Popp said. “I had no idea what all I was signing up for. I could have gone to my classes last year and everything probably would have been fine, but I was new to the position, and I didn’t want to take any chances with something going wrong.”

Popp said he begins planning over the summer.

“All the chairmen receive packets over the summer explaining everything that needs to happen before set-up that Sunday before Fall Fest,” Popp said. “I try to get everything planned and squared away over the summer so it’s not as stressful in the fall, but it can be hard to be motivated about Fall Fest during the summer.”

Popp said experience has made all the difference.

“Last year around this time I thought I was losing my mind,” Popp said. “I was running on no sleep; I was stressed about school and whether we had everything we needed for the booth. I kept wondering why I was skipping class. But I know what to expect now, and it’s pretty enjoyable once you find the rhythm.”

Popp said overall, it’s worth it.

“I love being part of the process of what everyone else enjoys,” Popp said. “I know I can’t walk around and participate in Fall Fest like they can, but I can make their day. It’s that moment of packing up your booth and driving off once it’s all over that you realize, ‘Wow, that was fun.’”

Kelsea Brady said her freshman year she ran around Franklin street yelling, “Ask me about my wiener!”

The now junior public relations and journalism major said she was assigned to wear the hot dog suit for her sorority Alpha Sigma Alpha.

“I thought the whole thing was hilarious,” Brady said. “I don’t know if we actually made more money because of it, but I like to think we did. People would come up to me and ask why I was in a hot dog suit or they would ask to take pictures with me. It was a great opportunity to tell them about my sorority and get to know people.”

“Most of the girls want their weekends free,” Brady said. “I sign up for the weekends so I don’t have to run around from school and work and the booth. The weekends are also the busiest, so it’s the most fun to work during those times.”

Brady said the proceeds go to charities and philanthropies such as Riley Children’s Hospital.

“Does Fall Fest take up a lot of time?” Brady said. “Yes. Does it all go for a good cause? Yes. It’s so important to raise money for organizations like that. Plus, it’s an opportunity to have so much fun during an event everyone loves.”

“It’s different when you are running a booth than when you are just attending,” Skaggs said. “You don’t realize how much goes into it. I miss being able to leave whenever I want, but since shifts are only two hours long I can still walk around and enjoy the festival after.”

Skaggs said she would encourage everyone to come to Fall Fest at least once.

“You have to experience the atmosphere,” Skaggs said. “There is so much going on and there is so much food. Oh my goodness, the food. I have tried almost every type of fried food there.”

Skaggs said Fall Fest is one of Evansville’s bragging rights.

“Fall Fest is that small break before all the students leave the university for fall break,” Skaggs said. “It’s Evansville’s own little fair. You get to go out and eat amazing food and participate in something as a community before it gets cold outside.”