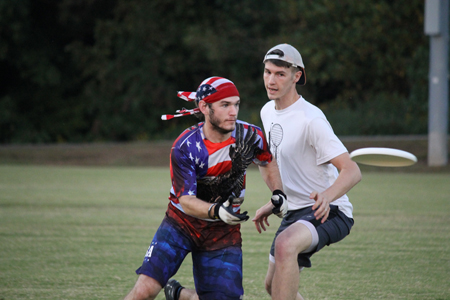 PHOTO BY HANNAH SPURGEON | THE SHIELD

The men’s ultimate Frisbee team begins its scrimmage with alumni during the 2015 season. Kyle Wood, alumni class of 2015, rushes to his teammates aid and attempts to catch his throw while Kyle Mayo, alumni class of 2012, swiftly tries to disrupt the play.

Walking through the Quad during the warmer months usually consists of a crowd of people, loud noises and a few hammocks hanging from the nearby trees. But there’s one other aspect that adds to the ambiance that is the Quad: the frisbees making rounds through the air.

This isn’t unintentional. Those frisbees have served the same purpose for over 15 years now, dating back to the spring semester of 2002 when the USI ultimate frisbee club sport was established.

“We usually try to get someone out there throwing a couple times a week,” Luc Prevost, assistant captain of USI ultimate frisbee, said. “Not only just to keep (them) throwing, but to attract freshmen that might want to come play.”

Prevost is in his fourth season with the team after joining his sophomore year. He said he knew nothing about ultimate frisbee before joining the team, and it took until his second year on the team for him to improve.

“The first year of playing was really discouraging for me just because I’m learning to throw a frisbee instead of a baseball or football,” Prevost said. “There’s so many different ways to throw the frisbee. I wasn’t picking it up very well.”

Prevost said his experience when he joined the team is what he expects from players new to ultimate frisbee.

This is why this fall semester, which doesn’t count towards rankings, isn’t being looked at in a competitive light since the team is comprised of mostly rookies. Instead, the team’s more experienced players plan on using the fall as a learning opportunity for the newer players.

Unlike Prevost, who used his first season on the team to learn the game, Nathan Sevenish, the team captain, has played ultimate frisbee since he was 17 and he’s now in his senior year at USI. His girth of experience is one of the reasons he credits for being named captain the past two seasons.

“I have the most experience out of everyone on the team,” Sevenish said. “I would like to think I’m a good role model for what’s on the field. I hope I do things right that the team needs me to do.”

Since the number of rookies on the team is close to twice as many returning players on the team, Sevenish said he hopes the team starts the season strong and avoids stumbling early on.

“We lost a lot of experience from last year to this year, in terms of veteran players not returning due to graduation,” Sevenish said. “We kind of have a short roster this year. There’s going to be a lot of room and opportunities for rookie players to step up.”

The team practices at the Broadway Recreational Complex three times a week Monday, Tuesday and Thursday from 6-8 p.m. There are three tournaments the team is scheduled to play in this semester. The first tournament is Sept. 16-17 at Purdue University in West Lafayette, Ind. Barring cancellations, the team plans to compete in a tournament in October and November.