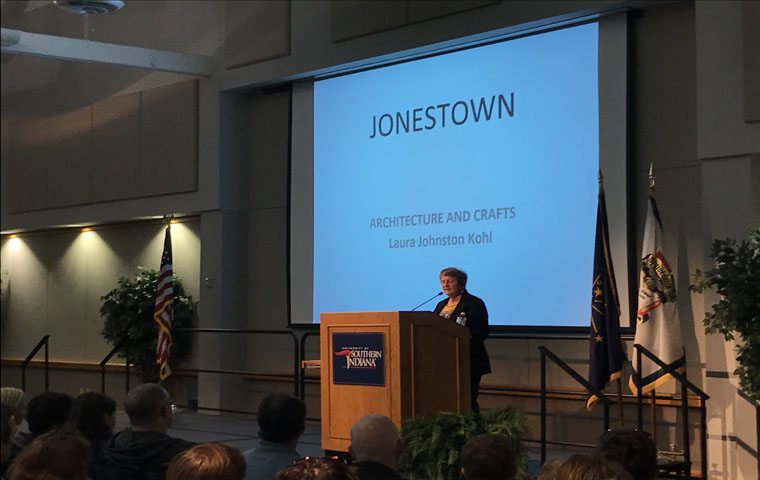 Laura Johnston Kohl, a Jonestown survivor talks about her experience in the People’s Temple Monday night in Carter Hall.

Laura Johnston Kohl warned the audience at Carter Hall Monday night she was prone to randomly crying because of her PTSD or “Peoples Temple Stress Disorder.”

In the lecture, Kohl explained how she became a member of the Peoples Temple during March 1970 and stayed until the massacre took place Nov. 18, 1978.

After spending a weekend at Woodstock and six months with the Black Panthers, both of which didn’t work out, she was still searching for a way to be an activist.

Kohl said her sister convinced her to move to San Francisco, and the following Sunday after she moved she met Jim Jones, the leader of the Peoples Temple, in Redwood Valley.

“I liked his whole congregation that was totally integrated and wonderful, and I became committed to Peoples Temple for the next seven years,” she said.

Kohl said seeing a group that promoted racial inclusion and accepted the literate and illiterate made her want to join.

Once she joined, some of her duties consisted of working at the welfare office by day and driving a Greyhound bus and writing letters to judges and probation officers on behalf of the Temple at night.

“I ended up driving all around the country, and when it was my turn for a break, I slept underneath the bus in the luggage compartment,” Kohl said.

This went on until 1974 when one of the Temple’s members died of a drug overdose, which sparked the discussions about moving to Guyana and forming their own community in the rainforest.

She said her first trip to Guyana took place around Christmas of 1975 and she fell in love with it from the first moment she saw it.

“Everything about it was so spectacular and had so much potential,” Kohl said.

Exactly seven years after she joined the Temple, Jim Jones asked her if she would drive the boat from Jonestown to Georgetown and bring back any goods the commune required to function.

Part of her responsibility was also meeting Temple members at the airport who traveled to Guyana from the States to live in Jonestown with the other members.

Kohl said she held that job for close to a year before being sent to live in Jonestown with the other members of Peoples Temple, where she lived for around nine months.

“We stayed very busy; every minute of every day we were working,” Kohl said. “We never had a day off until the summer of 1978, when Marceline Jones came down and talked Jim into letting us have Sunday afternoons off.”

Kohl said the exhaustion from working so much was the price they paid while building their “promised land.”

The exhaustion led to the Temple members being less concerned with Jones’s behavior, and Kohl said that’s what led to them being blindsided when Jones called for “Revolutionary Suicide” and decided to poison to the people of Jonestown.

She was able to avoid being one of the over 900 victims because she had been relocated to Georgetown in October 1978, a month before the mass murder took place.

Kohl said the people who want to make a change are the ones at risk of joining groups like People’s Temple because they realize there’s more power in numbers.

Kohl said everyone is vulnerable, and a person never knows what they may join.

“You can never fall asleep at the wheel,” Kohl said. “You always have to be a critical thinker. Life is never so sweet and pure or good that you can trust the driver and just move on. It’s never that way, and con men like Jim Jones and others always know how to hook us.”

Aleisha Jones, who was listening to Kohl speak from the crowd, said the event was powerful.

“It was eye opening to see the evolution of how innocent this seemed and then the gradual transition to becoming deadly,” the senior business administration major, said.

She said what surprised her the most is how easy it can be for people to be involved in something dangerous and not be able to realize until it’s too late.

Instructor of English Jenn Horn said she thinks the main point of the lecture is that people need to pay attention to what’s happening around them.

“The idea that you need to be informed and think for yourself is maybe more relevant than she made it out to be,” Horn said. “I think she emphasized that point, but I think she could have emphasized it even more, especially in today’s political climate.”

She said something she felt was interesting is that Kohl didn’t speak negatively of Jim Jones to the degree she expected, except to say he was egotistical and a religious charlatan who used religion as a tool to control people.

“She constantly referred to him as Jim, and her time in Jonestown wasn’t really negative,” Horn said. “As a folklorist, we always look at those grains of truth in legend and history, and this idea that Jim Jones was a mad man and all these people fell to a mad man’s power is commonly discussed, but she said people were there because they wanted to do this great thing for the world.”