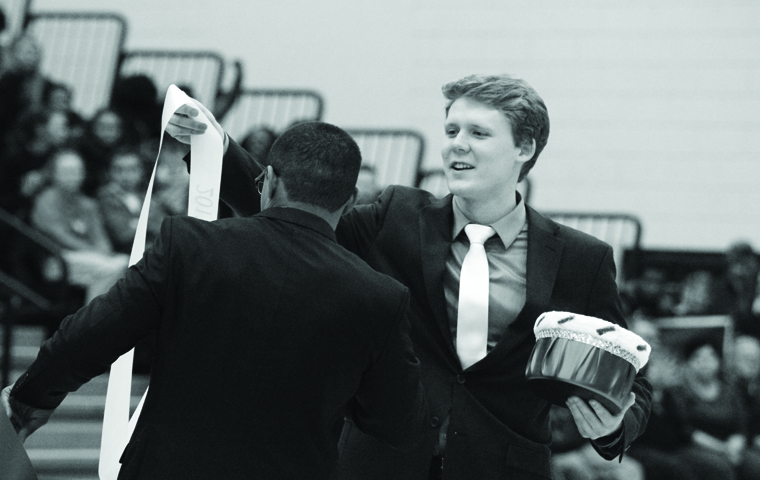 Evan Stieler said during the college search he wanted to go somewhere that would let him play basketball.

“I think I was in that mindset of the high school athlete like ‘oh I have to keep playing,’” he said.

Stieler, a senior biology major, will be awarded the President’s Medal at commencement April 29. The recipient of the award is chosen by the Student Affairs Committee of the Faculty Senate.

Originally from Newburgh, Stieler said he has fallen in love with the community and the opportunities he has been granted have led to a lot of personal growth.

“I was very honored to be able to represent the senior class,” he said. “Some of these people I have really gotten to know over the past four years. It’s the perfect close to my undergraduate experience. It’s been a lot of fun and I’ve learned a lot.”

Of the long list of organizations Stieler is involved with, which includes Student Ambassadors, SGA and Board of Trustees, he said he had the most fun being a Resident Assistant for the Honors Living Learning Community.

“Getting close to 30 freshmen every year and really being their connection to the university at first and helping them form their own experiences is so rewarding,” he said. “Seeing some of these residents go from when they enter as a nervous freshman and when they leave going into their sophomore year, they are a completely changed person. To be able to witness that I believe is the essence of college.”

Stieler said getting involved on campus was what made him feel at home.

“It really plugged me in. I learned so much about the university and its history and its mission,” he said.

Stieler said he plans to attend medical school next year, but is unsure of where. He said the faculty has been a huge help in advising him.

“They even gave me their personal cell phone numbers so throughout the whole medical school process I could just text them with any questions,” he said. “Them willing to take their time really meant a lot to me, and it really showed me how much they care about the students here. I think it’s a testament to the quality of our faculty here.”

Assistant Professor of Biology Kimberly Delaney is one of the faculty members advising Stieler on options next year.

Delaney said Stieler has matured both socially and intellectually in the classroom.

“Evan has all of the intellectual capabilities to meet the rigor of medical school, and I think his level of involvement here on campus has made it clear that he can manage to balance that classroom pressure very well,” she said.

Delaney said Stieler is one of the brightest students she has taught during her time at the university because he is fun to teach and he is a leader among his peers.

Delaney said Stieler’s peers recognize him as a natural leader, and she believes this is his greatest feature.

“I sat at a table with some current presidential scholars who were trying to get current high school students to come here and they said ‘oh you have to live in the Honors Living Learning Community’ and they didn’t say that because it had better rooms, it was because of Evan,” she said. “He was a reason to pick a dorm.”