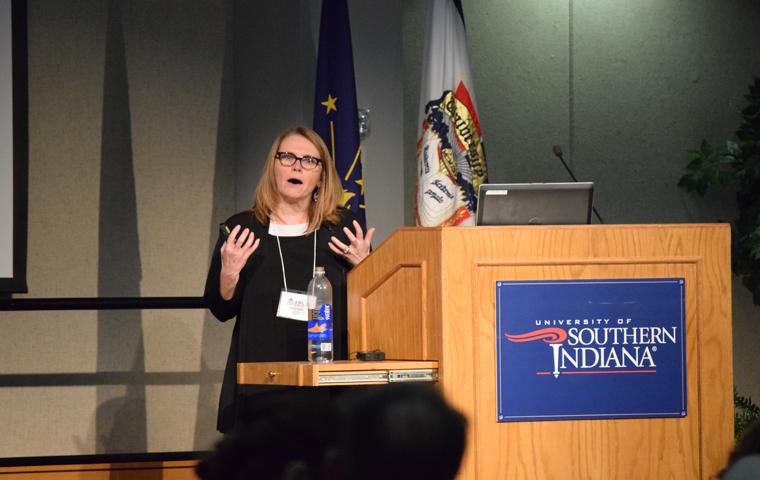 In an “era of lowered expectations,” Kristina Sheeler said the road ahead is tough for women when it comes to political candidacies.

Sheeler, a Professor of Communication Studies at IUPUI, was the keynote speaker at the Indiana Political Science Association conference Friday in Carter Hall.

Her speech, “Campaign 2016: A New Era of Lowered Expectations,” centered on the presidential election and the candidacy of Hillary Clinton, specifically how she was portrayed by the media and the public.

53 percent of voters in the 2016 election were women, yet women hold only 19 percent of the seats in Congress, According to statistics compiled by CNN exit polls.

Sheeler said there are five keys to a women becoming the President in today’s society.

The five keys are executive experience, knowledge of policy and procedure, proper language and the ability to issue tough statements, friendly appearance and an ambitious attitude.

“A woman must be perceived as the much stronger candidate,” she said. “Women have been hindered by the American political system in the past. It would take a complete overhaul of our political system to get more women in the pipeline.”

The conference included various panels which reviewed research proposals ranging from voting behaviors to public policy, along with a roundtable discussion on the American Presidency.

Sheeler said she believes in order to change the stigma that women cannot become President, the conversation must be changed.

“I think there is a generational change coming,” she said. “I think young people are more engaged in the political process.”

“I thought her speech was really great, and I was shocked to see how women’s leadership roles are portrayed in America,” Loc Duong said. “If you look at other countries like the United Kingdom and Germany and you see the success they have had with women leaders, it makes me wonder why in a democratic nation like the United States we have never had a woman President.”

Duong said he hopes to see changes in the American political system and in his home country of Vietnam that allow women more of an opportunity to become political leaders.
“In Vietnam, women have struggled to gain leadership positions in the state in the past, but women are starting to gain key positions in Congress,” he said. “For example, the vice president is a woman. I think that in the future that is going to change.”