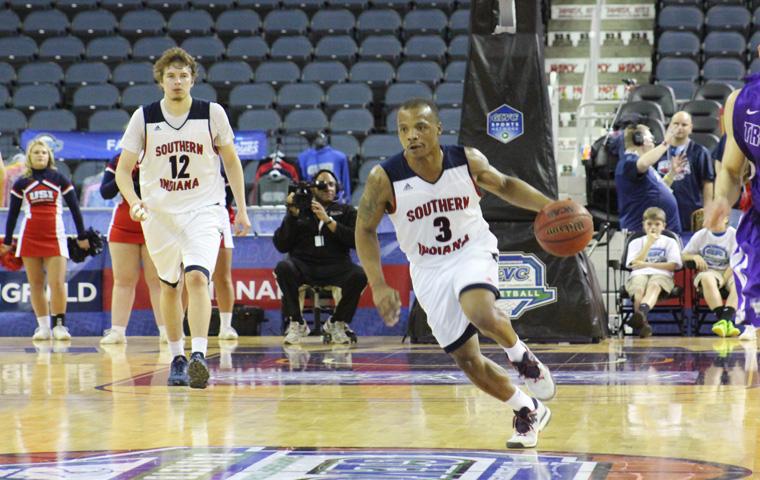 Senior guard Bobo Drummond drives down the court during the GLVC tournament March 2 at the Ford Center.

No. 3 seed USI’s hopes for advancing past the first round of the NCAA Division II Tournament were crushed Saturday at Knights Hall in Louisville by No. 6 Findlay’s Tyler Stern-Tucker in a 70-69 loss.

Stern-Tucker finished with 17 points and the game-winning layup with six seconds left after USI regained the lead 69-68 when Bobo Drummond finished a three-point play at the line with 31 seconds left.

“It was a big play at the end, but we have a series of plays we work on at the end of games, and that’s one we feel like we can get a bucket on every time,” Findlay head coach Charlie Ernst said.

Ernst said he was less worried about his team scoring in the final seconds than he was about stopping USI from scoring when they got the ball back.

The game’s final possession went to Jeril Taylor, who missed a near half-court shot as time expired. He finished with seven points after going 2-of-11 from the floor.

Taylor’s off-target jumper ended USI’s season at 25-5 and on a three-game losing streak including back-to-back losses in the final seconds (GLVC Tournament against Truman State).

“Down the stretch, they made the plays they needed to win and we didn’t. They got that back screen for the guy cutting to the basket [Stern-Tucker] and got an easy basket,” Alex Stein said. “We should have straight-lined it [to the rim on the final play]like coach was telling us, because they couldn’t foul us or we’d be going back to the free throw line, but it doesn’t come down to just that.”

By the 11:19 mark of the second half USI was up by 13 in what turned out to be their largest lead before being outscored 34-20 over the remainder of the game.

Bobo Drummond finished his college career by scoring his career-high in his final game. He shot 71.4 percent (10-of-14) from the floor in the second half and scored 26 of his game-high 31, but he left two points off the board.

“I would like to have those free throws back that I missed. Those were two big free throws,” Drummond said. “I left it all out on the court today with my teammates. It’s just unfortunate I can’t put the jersey back on and play with them one more time.”

After failing to make the NCAA Tournament two out of the past three years, this is the fourth time in the last five appearances USI has gone out in the first round.