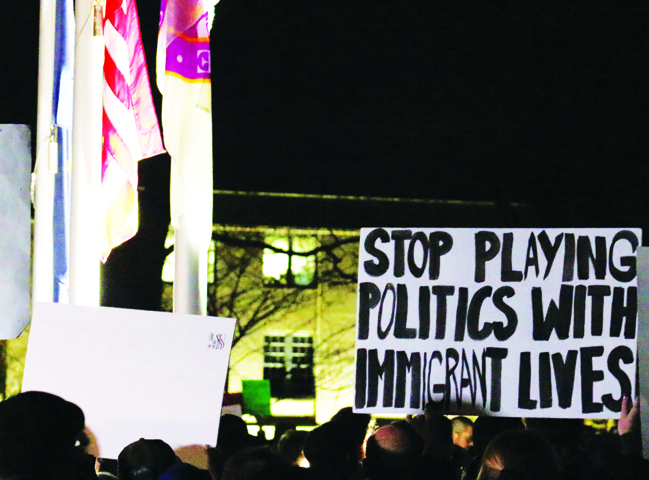 Community members gather round the Clifford Circle Tuesday evening for the Interfaith Rally of Support at the University of Evansville. The rally, sponsored by the Evansville Executive Interfaith Partnership gathered community members to stand with their Muslim brothers, sisters and refugees; and to stand against hate, bigotry and the executive order. Members held signs and sang along to “One love/ People get Ready,” by Bob Marley.

Zarmina and Naaima Mufti want President Trump to know that being Muslim is not a crime.

The Muslim-American cousins attended the Interfaith Rally of Support Tuesday night at the University of Evansville.

“Regardless of the religion, we are just trying to show our solidarity with American values and how it is completely unlawful and unconstitutional to tell people that you don’t belong here,” Zarmina Mufti said.

The rally, sponsored by the Evansville Executive Interfaith Partnership, gathered members of the community to “stand up against hate, against bigotry and against the recent executive orders against refugees.”

“Just to think people that are trying to better their lives are the ones being affected by this is disheartening,” Naaima Mufti said.

The EEIP is a non-profit organization that allies with members of all religions to engage in support and understanding of each other. They meet on the University of Evansville campus every month.

The event was organized just a day before, but the time frame didn’t stop over 200 people from crowding the Clifford Circle on campus.

“This is peaceful,” Zarmina Mufti said, “No one is screaming, no one is yelling, it’s not that type of protest. This is symbolic of what our religion stands for. I feel like there is more love than hate here.”

Rev. Kevin Fleming of the First Presbyterian Church of Evansville said he was “dumbfounded” by the amount of attendees and thought it was good to see that people of all religions do not support the travel ban and the implications it has on Muslim-Americans.

The executive orders, signed by President Trump Friday evening, bars refugees from any country from entering the United States for 120 days along with an indefinite ban on Syrians entering the country and a 90 day ban on immigrants from seven majority Muslim countries.

“I think the executive order is complete crap,” University of Evansville graduate Beth Samelak said. “It really hurts to think that all of the progress we made over the past eight years was done away in a couple of minutes.”

Samelak, who has a bachelor’s degree in Business Administration, said she attended the rally to support the students that supported her during her time at the university.

“President Obama worked really hard to make America welcoming for everyone in the world and I really hope that Congress can get it together and stop this from happening,” she said.

Rabbi Gary Mazo of Temple Adath B’Nai Israel of Evansville said there was a tremendous amount of support for the Muslim community.

“The fact that this is a place of higher education and that there are students from all of the impacted countries that are here,” he said. “We need to support them.”

Mazo said the EEIP is reaching out to Muslim students with community events like the rally of support, along with hosting other events on campus.

Mazo said he hopes elected officials will hear their voices and stand against anyone who creates laws that are based on hate and fear.

“We are not going to stand for it,” he said. “If this keeps up, there is going to be a dramatic shift and I think they know that.”