Eagles bounce back with victories over Wisconsin-Parkside 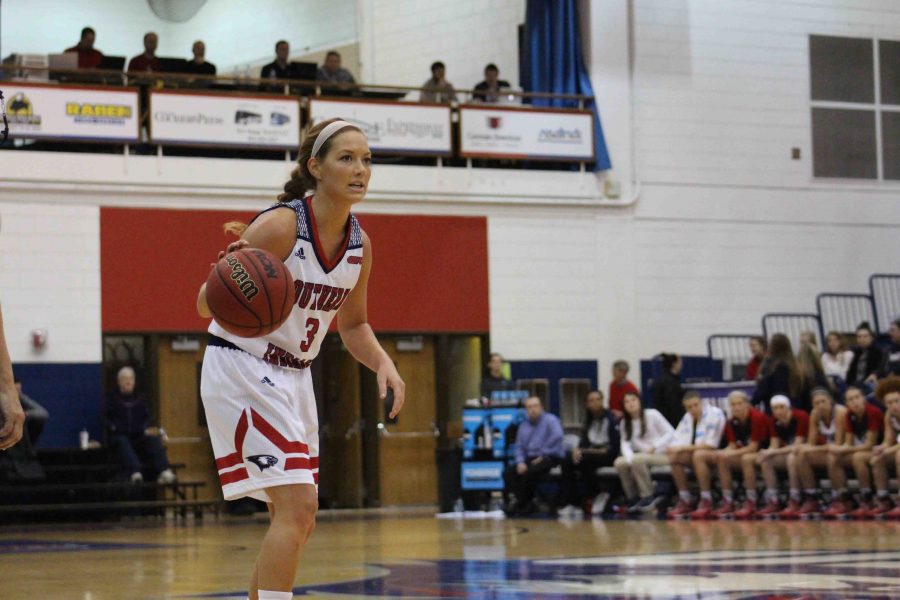 Randa Harshbarger, a junior guard, dribbles up the court, before giving directions to her team.

The men’s and women’s basketball teams both earned wins in the second game of the three-game home series.

Tanner Marcum led the team with 24 points, Kaydie Grooms scored 15 and both Morgan Dahlstrom and Randa Harshbarger ended the night with 10.

Overall the team pulled down 50 rebounds to Wisconsin-Parkside’s 40.

“We always talk about if we can out-rebound a team we can beat them,” assistant coach Randa Dallas said. “Rebounds show a lot. It’s toughness thing.”

Dallas said if the team is battling for rebounds it shows that other parts of the game are being done efficiently as well.

Wisconsin-Parkside had 20 turnovers which USI used to score 24 points. Dallas said defense and scoring off of those turnovers was part of the discussion at halftime for the team.

Dallas was not pleased with the final shooting percentage for the team, which from field-goal range was 36.6 percent.

For a stretch in the third quarter she said good shots just weren’t falling.

The bench scored 16 points for the team this game which is an improvement from last game when Dallas said the bench really wasn’t a factor for the team.

The men’s team came back from its Monday night loss to Bellarmine with a 76-72 victory over Wisconsin-Parkside, fueled offensively by 25 and 23 points from Jeril Taylor and Alex Stein respectively.

This win ended a 15-game win streak for Wisconsin-Parkside and gave the team its first loss in Great Lakes Valley Conference play.

“It’s good for us, it shows that we can bounce back from a loss,” assistant coach Kevin Gant said. “It shows that we have a lot of resilience and that’s big time for our team.”

The lead changed only four times throughout the game, but in the final eight minutes USI never led by more than four points.

Wisconsin-Parkside had the ball, down by three, with 10 seconds left to play and attempted a layup that was met with a block from guard Cortez Macklin.

Gant said Macklin “did senior things and made senior plays” in those last minutes of the game.

“He got huge rebounds, put-backs, fouls,” Gant said. “He knew we needed a stop, he rode that guy down the lane and finished it off with a block. It was just a big time play.”

Saturday both teams will face Lewis University in the Physical Activities Center. The women will tip at 1 and the men at 3:15.