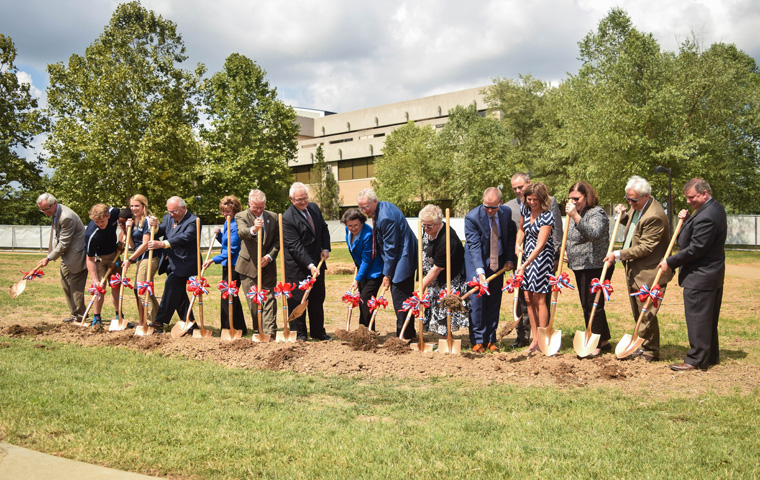 Student ambassadors, administration and members of the Fuquay family break ground at the Sep. 1 groundbreaking ceremony.

Construction of the Fuquay Welcome Center is being pushed back after the initial bids for the project overshot the budget set forth by the university.

Gary Burgdorf, a construction administrator with Facility Operations and Planning said the number the university had in mind for the project was $2.5 million.

It was shown at the July 14 Board of Trustees meeting that $2 million of the budget would come from private gifts and the other $500,000 from the Special Projects Reserve.

“We’re trying to pair it down into something affordable,” he said. “The first bids came back and it was more than we had anticipated. We’re not just one, big bag of money, we have parameters.”

Right now the university is working with DKGR Architects, a firm out of Indianapolis, to see how it can be made less expensive.

The next meeting with the firm is planned for Friday.

Burgdorf said some materials, like the concrete and finishes, have already been adjusted to help cut expense.

Burgdorf said some of the local contractors have also been hesitant to dive in because of the uniqueness of the plans.

The original plans for the building included a roof garden with walkways, patios and seating and Burgdorf said there are some “tricky” items inside as well.

He said they are working to remove parts of the design that could be seen as “gray area.”

The necessity of these changes has pushed back construction for the Welcome Center, which was originally expected to be finished for the Fall 2017 semester.

“We can’t start [construction] until we have a contractor,” Burgdorf said, “and we can’t get a contractor until we send [plans] out and get bids.”

Burgdorf said he thinks this Friday’s meeting could be the final one for this step of the process.

He said if they don’t, he will be quite disappointed.

Once construction is able to start, Burgdorf said he does not want to say that it could be done in the original 9-12 month time frame.

He said because of all of the unusual aspects of the building, he would expect 18 months as a more realistic time frame.

The groundbreaking ceremony for the construction site took place September 1 which Burgdorf said was a little premature.

He said he expects workers to break ground during March or April.

“It should go faster when we start because the weather is a littler better,” he said.

So far some tree removal has been done to the area and a fence wrap was put up around the site in August.

“We really thought we would get started last fall,” Burgdorf said.

He said currently everyone involved is very hopeful about the construction projects planned and anxious to get started.